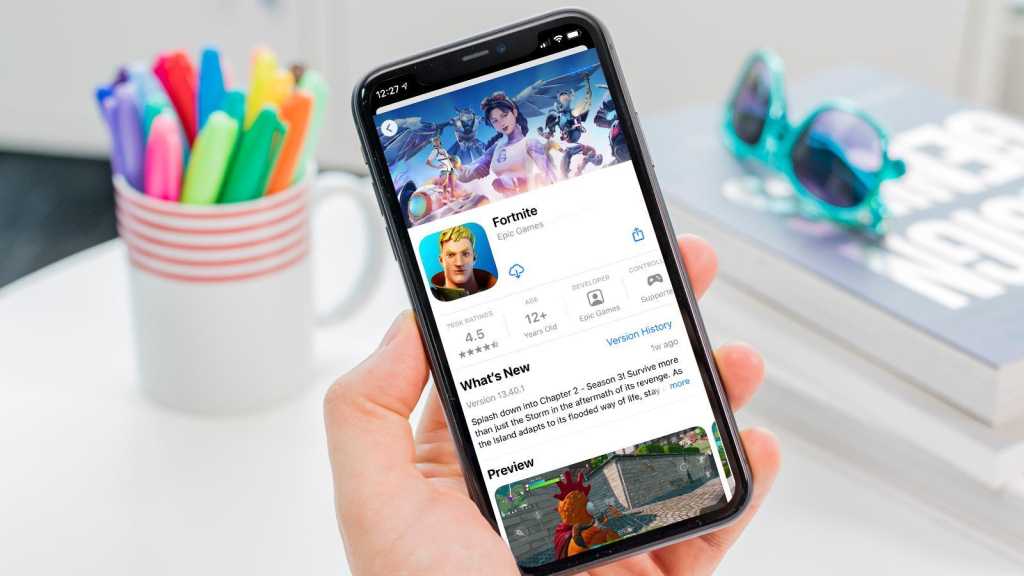 Fortnite, one of the most popular games currently available on any platform, was unceremoniously dumped from the App Store in 2020 following a disagreement between Apple and Epic Games. Gamers around the world were aghast at the decision, which meant it was no longer possible to download Fortnite to iPhones and iPads in the normal way.

But fear not, because it’s still possible to install Fortnite on your iPhone or iPad, even if you’ve never bought or played the game before. In this article we outline the ways in which you can play Fortnite on iPhone or iPad despite Apple no longer allowing it in the App Store.

UPDATE: As of May 19, 2022 Nvidia GeForce Now has opened a beta to test a new touch-control version of the game. Details of how to play are below.

Why can’t I install Fortnite from the App Store?

You’ve probably heard all about Apple’s long-running dispute with Epic Games. It all began when Apple banned Fortnite from the App Store in August 2020 after Epic set up an in-app payment system in an attempt to bypass Apple’s 30% cut.

The firms sued each other and battled it out in court for the remainder of 2020 and most of 2021, with the judge eventually reaching a verdict that largely favoured Apple.

If you already have Fortnite the good news is that this doesn’t mean Fortnite will be removed from your iPhone. Fortnite isn’t going anywhere. It will remain on your iPhone. The only possible issue might be if bugs cause the app to stop working in the future.

The people who have the problem are the ones who haven’t already got Fortnite on their devices and want to find a new way to get it.

Will Apple let Fortnite back into the App Store?

The legal wrangling appears to be mostly over, bar some appeals and resistance to the judge’s stipulations. But there’s little sign of reconciliation between the two firms, and it doesn’t look like Fortnite will return to the App Store any time soon.

You can use Microsoft’s Xbox Cloud Gaming platform to stream Fortnite.

You can play Fortnite this way using the touch controls or a Xbox controller, wchih can be paired with an iPhone, iPad, iPod touch or Mac as per these instructions: How to pair an Xbox One controller with your iPhone or iPad.

The main disadvantage of this method is that because you are streaming the Xbox version of the game over the cloud there may be some quality compromises and increased latency.

To set up Xbox Cloud Gaming and play Fortnite on your iPhone or iPad follow these steps:

Read more about Microsoft’s announcement that it is making Fortnite available free of charge through the Xbox Cloud Gaming platform.

You can use nVidia’s GeForce Now service, which was updated in January 2022 to allow Fortnite to be played via a Safari web browser. It was a closed beta, but now Nvidia has opened up the beta to anyone who wants to play. In fact you don’t even need to be a paid subscriber to play – although if you aren’t a subscriber you will be limited to hour-long sessions and reduced performance.

GeForce Now is a cloud-based gaming service. That means the actual gameplay is rendered on a server somewhere rather than locally, so you can get the performance of a high-end gaming PC on a cheap PC, Mac, iPad or iPhone. Just make sure you’ve got a good internet connection: Nvidia recommends 25-50Mbps.

Subscription pricing is arranged via tiers, including a free tier (hooray!) at the bottom for short sessions and limited performance. The Priority plan costs £8.99/$9.99 a month, while the elite-performance RTX 3080 tier costs £89.99/$99.99 for six-month chunks.

You can get all the details in our sister site Tech Advisor’s explainer: What is Nvidia GeForce Now?

The problem with the above method is that it will only work if you’ve previously downloaded Fortnite. So what if you’ve never installed Fortnite on your iPhone?

One possible solution could be to link your account to someone else’s via Family Sharing.

If a member of your family has downloaded the app in the past, and your accounts are linked by Family Sharing you should be able to download the app to your iPhone.

In a separate article we run through how to set up Family Sharing.

Method 5: Buy an iPhone with Fortnite on it

The last method is also the one we would recommend the least. And that is to go searching on eBay for a second-hand iPhone with Fortnite on it.

Our advice is that this would be a bad idea. In order for the iPhone to be sold with Fortnite installed, it would need to still be linked to someone else’s account. At the very least this is going to be a headache, because you’ll need to alternate between their account (to which you won’t have the password) and your own account, which you’ll need to use to add other apps or make other changes.

You could use the device as a pure Fortnite machine and do everything else on your primary iPhone, but it’s still likely to be a pain.

In any case, it’s always better to get devices completely wiped between owners, for reasons of security, privacy and data access. In extreme cases the old owner might be able to wipe your iPhone remotely after you’ve started using it and adding your own data, or even accessing your information.

It’s just not a good idea, especially when (as we’ve seen) there are other methods that are far less risky.

Should I sell my iPhone with Fortnite on it?

For similar reasons, we do not recommend that you attempt to make a fast buck by selling your iPhone with Fortnite installed. You should always properly wipe an iPhone or iPad before selling it or you risk someone accessing your data, spending your money or even impersonating you.

Here’s how to wipe your iPhone before you sell it.