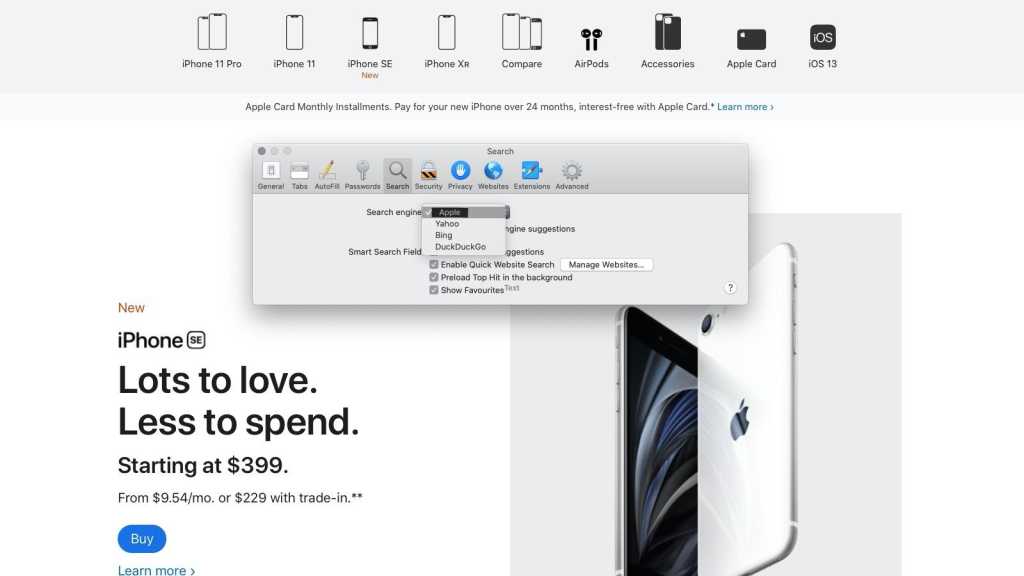 There are signs that Apple is working on its own search engine that could compete with Google.

The Google search engine has always been preset on every iPhone, iPad and Mac, but it looks like Apple could replace Google with its own search engine.

The rumour isn’t actually new and the signs are numerous. Plus Apple has some good reasons to do it.

The latest evidence comes from Jon Henshaw of Coywolf who claims that Apple may soon launch its own search engine.

He writes that changes in Spotlight Search in the iOS and iPadOS 14 betas, a significant update to its Applebot support page, and an increase in crawling from AppleBot, suggests that we could see an Apple search engine soon.

The blogger has recently noticed an increase in visits by an Apple search engine. According to his weblogs, Applebot recently ‘read’ his blog every day, previously this only happened occasionally.

SearchEngineRoundTable also noted back in July 2020 that Apple had updated the ‘about Applebot’ help documentation page with information about how it ranks web results.

Apple indicates that Apple Search may take the following into account when ranking web search results:

There’s more evidence that a search engine is in the works at Apple. The company recently posted various job postings for search engineers. The company was looking for specialists in areas such as artificial intelligence, machine learning and NLP. This doesn’t necessarily relate to work on a search engine – Apple might just be looking to increase resources for the further development of Siri and Spotlight.

In fact, it already is: Starting with iOS 14 Spotlight offers a new search that carries out internet queries itself and calls up websites directly – without using the Google search engine.

In fact, for long time it’s been the case that when searching the web with Spotlight the query is not routed via Google. The web hits listed under ‘Siri Website Suggestions’ in iOS 13 also come from Apple’s own search engine, according to Apple. This uses the so-called Applebot as a web crawler, which first appeared in 2014. Theories about an Apple search engine have been around since then.

But choosing to end the relationship with Google would be expensive for Apple. According to Bernstein estimates, Google pays about three billion US dollars a year to Apple for its search engine to be preset as the default on all iPhones.

Incidentally, the search engine deal between Google and Apple has long been a thorn in the side of the market watchdogs in the UK and the EU. As highlighted by Henshaw, in July 2020 the UK Competition and Markets Authority was looking into the deal, saying: “It is our view that Apple’s existing arrangements with Google create a significant barrier to entry and expansion for rivals affecting competition between search engines on mobiles.”

The finances and resources for such an action would be easily available to Apple, even if choosing a different search engine for Cupertino would be expensive.

Alternatively Apple could offer a different search engine to Google as the default. It’s already possible to choose between Bing, Yahoo and Duckduckgo via the Safari settings instead of Google. Currently Google is the preset, but that could change.

Will this damage Google’s position as the number one search engine? Probably not. Microsoft has been doing this for a long time. If you start a search query using the Windows search function the company’s own search engine Bing is queried. Despite Microsoft’s market power, this did little harm to Google.

However, if iPhone search queries suddenly stopped being made via Google this could become a problem for Google. After all, iPhone users – especially in the US – are an important target group for the advertising-focused company.

Apple’s own search engine seems like a logical next step. The EU’s already being critical of the search engine deal between Google and Apple. Apple has promised to protect users’ privacy and give them full control over their data. A search engine company like Google, which as an advertising company lives from the data of its customers, is a weak point for the whole privacy concept.

This article was adapted from a report on Macwelt.