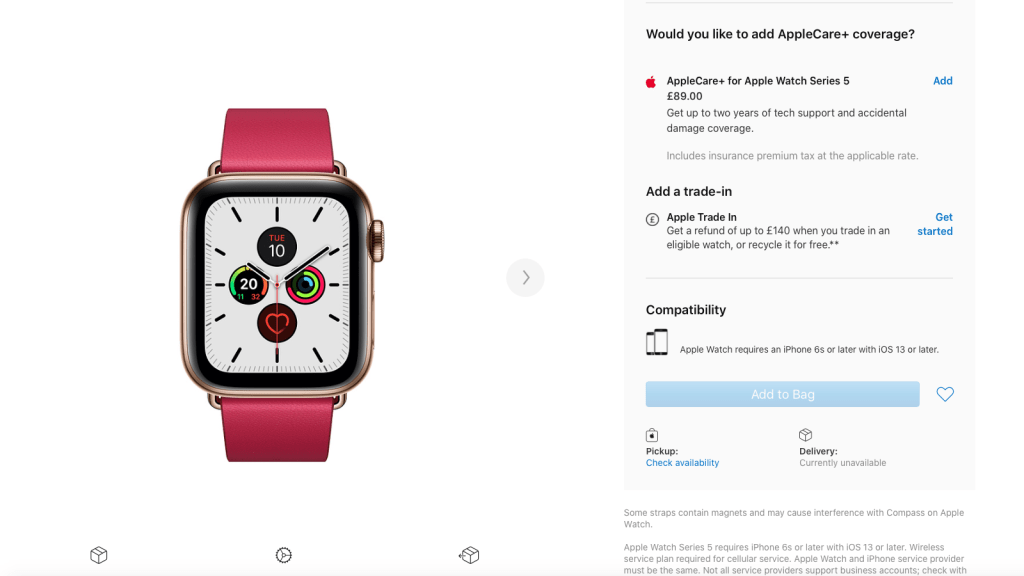 Just last week new models of the Apple Watch appeared in the database of the Eurasian Economic Commission, now further evidence that a new Apple Watch will soon launch comes from Apple itself – the Apple Watch is currently either out of stock or has long delivery times in Apple’s UK and European online stores.

If you click through the various options for the Apple Watch Series 5 you will notice that some models cannot be ordered and others have a delivery date after 14 September.

For example, in the UK the Apple Watch Series 5 in Space Grey with Aluminium Case and Sport Loop is listed as delivering by 14 or 15 September.

The Gold watch with Aluminium Case with Sport Band has the same delivery expectation.

Our German collegues have confirmed the same of their local Apple store. In some cases the delivery times were extended by more than a week.

However, the Apple Watch Series 3 is still available, with delivery currently pegged to 3 September.

However, as with European stores, the Gold Stainless Steel Case with Modern Buckle is listed as unavailable on the US store.

When stocks of popular products start to dwindle it suggests that new models will soon arrive. It has long been rumored that the Apple Watch Series 6 will launch at the beginning of September. The recent revelation that Apple had filed new Watches and iPads with the Eurasian Commission seems to indicate that something will soon launch.