The iPhone 12 will not be presented in early September, but a few weeks later. But what about iOS 14?

On that basis you might be thinking that we’d be seeing iOS 14 at some point between the 16 September and the 23 September… But this year isn’t typical.

For starters Apple delayed WWDC and the release of the first beta to the end of June – which will have potentially pushed the release date or iOS 14 back by a couple of weeks.

With the sixth beta of iOS 14 released on 25 August the the update cycle has now been shortened to a week. What does this indicate for the new launch?

We’ve compiled the release dates of all developer beta versions of iOS 12 and iOS 13 from 2018 and 2019 to identify any patterns. In addition to iOS 12 and 13, we have also entered the beta of iOS 14 that have already been published to see whether and how the release differs in time. 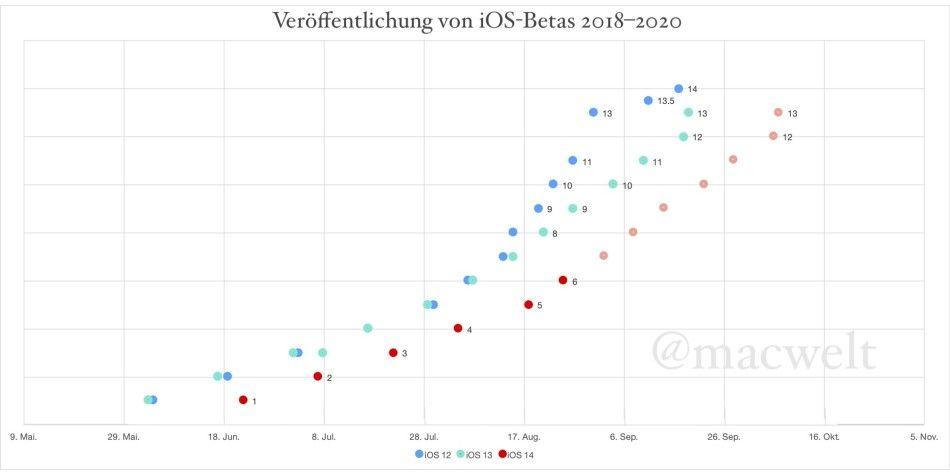 The usual pattern for iOS betas runs as follows:

One exception was with iOS 13 – in mid-August 2019 Apple started the beta of iOS 13.1 (even though iOS 13 had not yet been released). For the sake of simplicity, we have included iOS 13.1 with the beta versions for iOS 13. Our colleagues at Macwelt have summarized the results in a graphic.

To predict the future iOS 14 betas we’ve simply adapted the dates of the iOS 13 beta to iOS 14. If Apple sticks to its usual schedule for iOS, and iOS 14 sees an identical 14 iterations, the final version won’t be ready until early October. We are predicting Wednesday 7 October as the date iOS 14 will arrive.

This will probably be no surprise: WWDC 2020 took place around three weeks later than usual, so a similar a delay of three weeks for the release of iOS 14 is only logical.

With iOS 14 likely to launch around the time that Apple launches the new iPhone the insight into when the software will be ready could reveal the date of the iPhone launch. In recent years the release of the next iOS version was linked to the launch of the iPhone, arriving one week after the keynote. Will the same be true this year?

Twitter leaker Jon Prosser has suggested the keynote date will be in the week of 12 October – which is a week after our date, rather than a week before.

Will Apple release the operating system before the iPhone 12 keynote? Apple is sure to want to present the final version of iOS 14 on screen and under normal circumstances we’d expect the company to wait… But this year things are different, so maybe we could see iOS 14 before we see the new iPhone.

In fact, we could see it even sooner. There are rumours that suggest iOS 14 and iPadOS could arrive in early September. Prosser suggests that a new iPad could launch in the second week of September and a filing with the EEC suggests that a new iPad is coming soon – and that it will run iOS 14. If those rumours are correct that could mean iOS 14 and iPadOS 14 will indeed be ready by mid September.

Read all about iOS 14’s features and release date here.