Apple hasn’t said when it will be here, but we know that the wait for Big Sur won’t be long now. So, in preparation for its arrival, we have taken a look at how macOS Big Sur is shaping up. These are the Big Sur features we are most excited about, and the ones we think might not be such a big deal.

Wondering when Big Sur will launch? It’s here now! We have this guide to how to install Big Sur, plus, if things get really complicated though we also have: Fixes for Macs that won’t update macOS. Read’s about the latest version of Big Sur.

Note: people have found that Big Sur cannot be installed because they lack the required 35GB free space to install it! Read: Don’t bother trying to update to Big Sur if you have a 128GB Mac.

The first thing you will notice when you start using Big Sur is the new look. Everything looks whiter and brighter (unless of course you are in Dark Mode, in which case things look darker). The edges of windows are more curved. The menu bars in app windows blend with the controls pleasingly for a simplified look, and most notably there is no more grey. Previously there was a lot of grey, which at one point in the history of macOS we probably thought looked modern and stylish, but it just looks drab now. 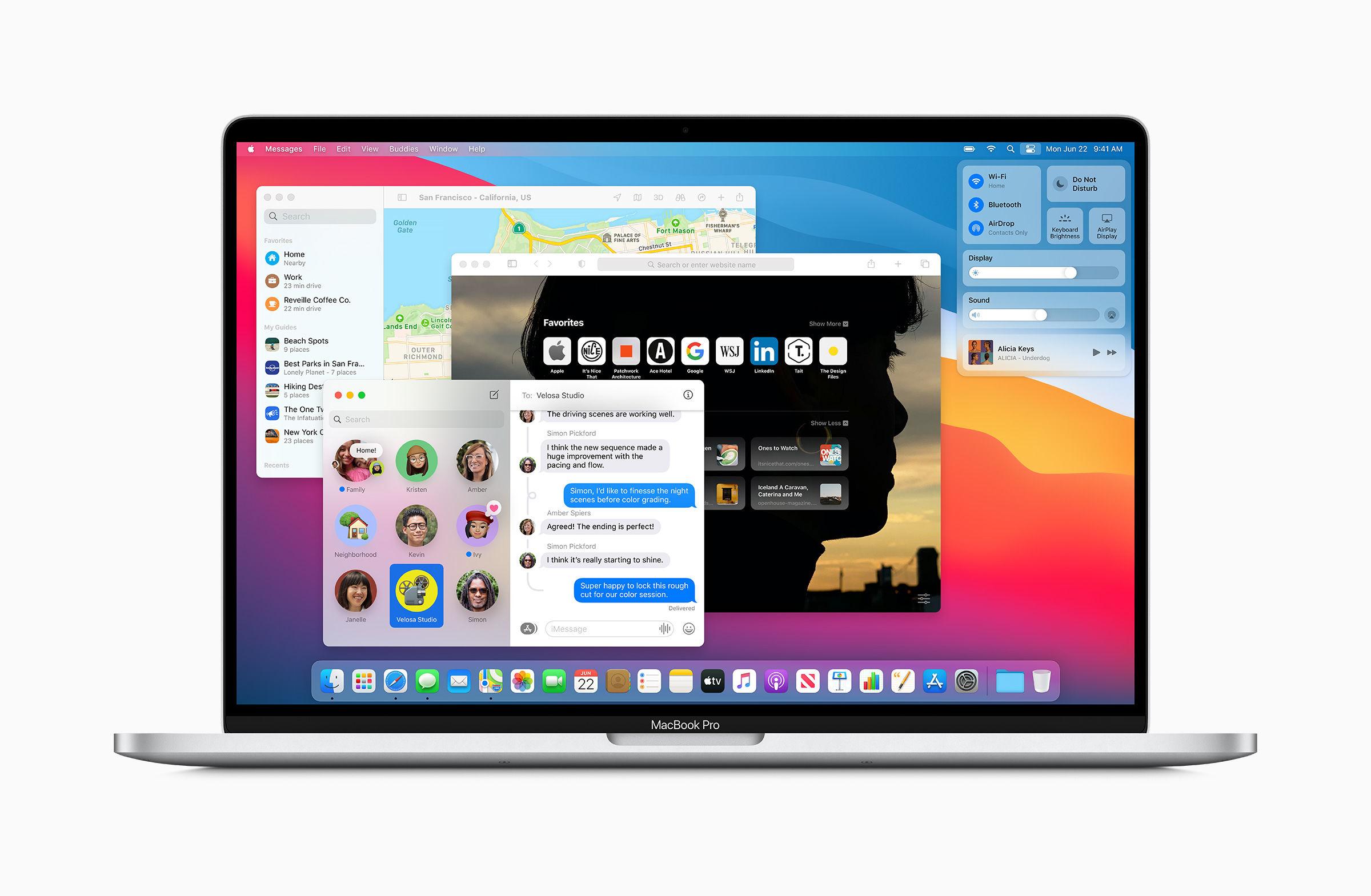 Speaking of design changes – the Dock has been tidied up, with a more uniform look to the icons that appear there. Prior to Big Sur the Dock was a real mishmash of squares and circles and other shapes, now every icon has a square base with curved edges like in iOS. Beyond this most apps retain their usual logo except for a notable few including the Mail app (no longer the ugly eagle stamp, now the usual envelope), the Messages app (now the same green icon with speech bubble as on iOS), and the Music icon has adopted the same white note on a red background that is now on iOS). We expect to see Apple apps such as Pages, Numbers and Keynote, and other third-party apps to adopt new icons to complement this tidier look.

Con: Control Centre is nice, but do we really need it?

Apple’s borrowed from iOS for this redesign, but it hasn’t stopped there. One of the biggest interface changes in macOS Big Sur is the arrival of Control Centre, which is accessed by clicking on the new switch icon in the menu bar beside the clock.

That’s our main criticism of Control Centre – many of the tools used to be accessed directly from the menu bar – such as the AirPlay Display feature and Bluetooth. It’s not as if there isn’t room for them there so tidying them away into a separate window doesn’t really make a lot of sense to us.

These interface and design changes do feel like Apple has had a bit of a tidy up rather than adding anything ground breaking. Control Centre is the closest we get to a standout feature, but it is no equivalent to Desktop Stacks or Dark Mode (introduced in Mojave) or Handoff (introduced in Yosemite). 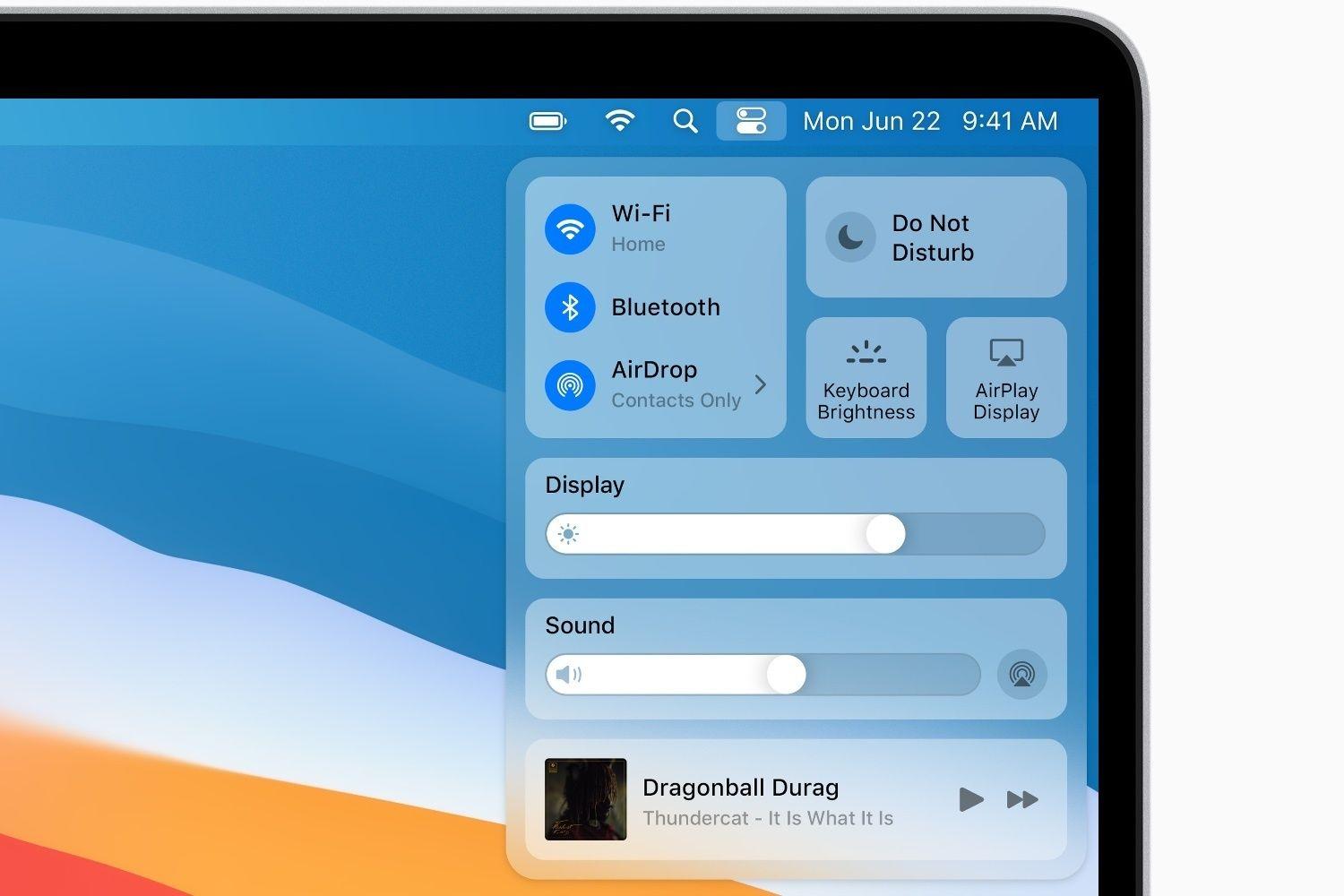 The good news is Apple’s given Notification Centre a bit of an overhaul the result of which should be a more useful tool. Notifications will be grouped together by app rather than being chronological, so that you don’t have to wade through heaps of notifications in search of the one you are looking for. 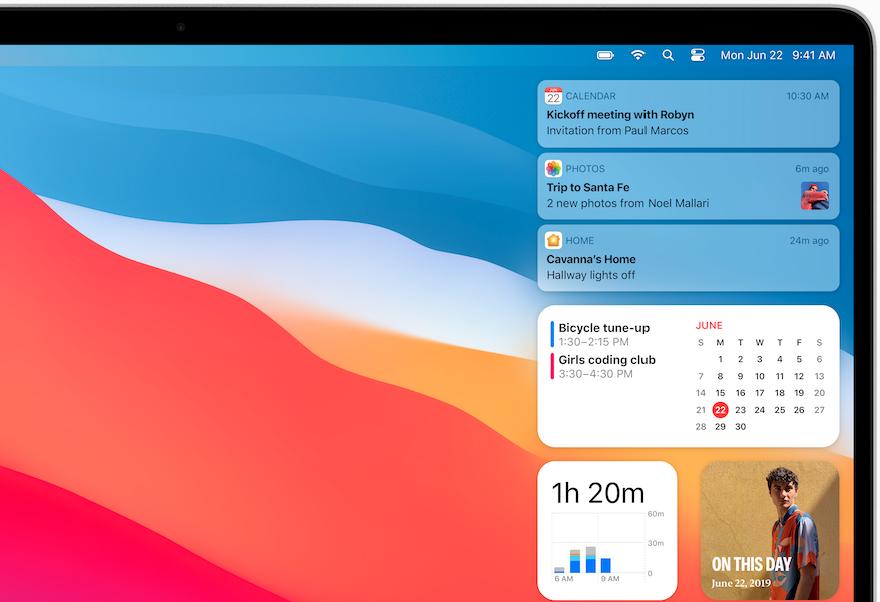 Perhaps the best thing about the new Notification Centre is the rejuvenation of widgets. Widgets aren’t new to the Mac – in Catalina and earlier you could find then in the Today section of Notification Centre and a long time ago they were part of Dashboard – but in Big Sur widgets will appear alongside your notifications.

On a Mac you can already select various widgets to appear such as Calendar, Stocks and Weather but there are embarrassingly few options as you will see if you visit the Notification Centre Widgets section of the Mac App Store. The unification of widgets on Mac, iPhone and iPad should mean that there are many more widgets to choose from.

Read more about widgets and how to use them here

Con: Maps doesn’t have a natural location on the Mac

Maps is one Mac app that feels out of place on a device that tends to be left on your desk or folded up in your bag, but Maps has been on the Mac since Mavericks launched in 2013 and in Big Sur Apple has given it some attention.

New in Maps are indoor maps of airports and shopping centres, and a new Look Around feature with 360-degree views of locations. The idea is probably that you might want to sit at your desk and plan a trip somewhere, maybe pinpointing the restaurants you want to eat at and the properties you want to visit. We just don’t believe people use the Maps app on their Mac and we don’t imagine these new features will really make a big difference to our experience of Big Sur. 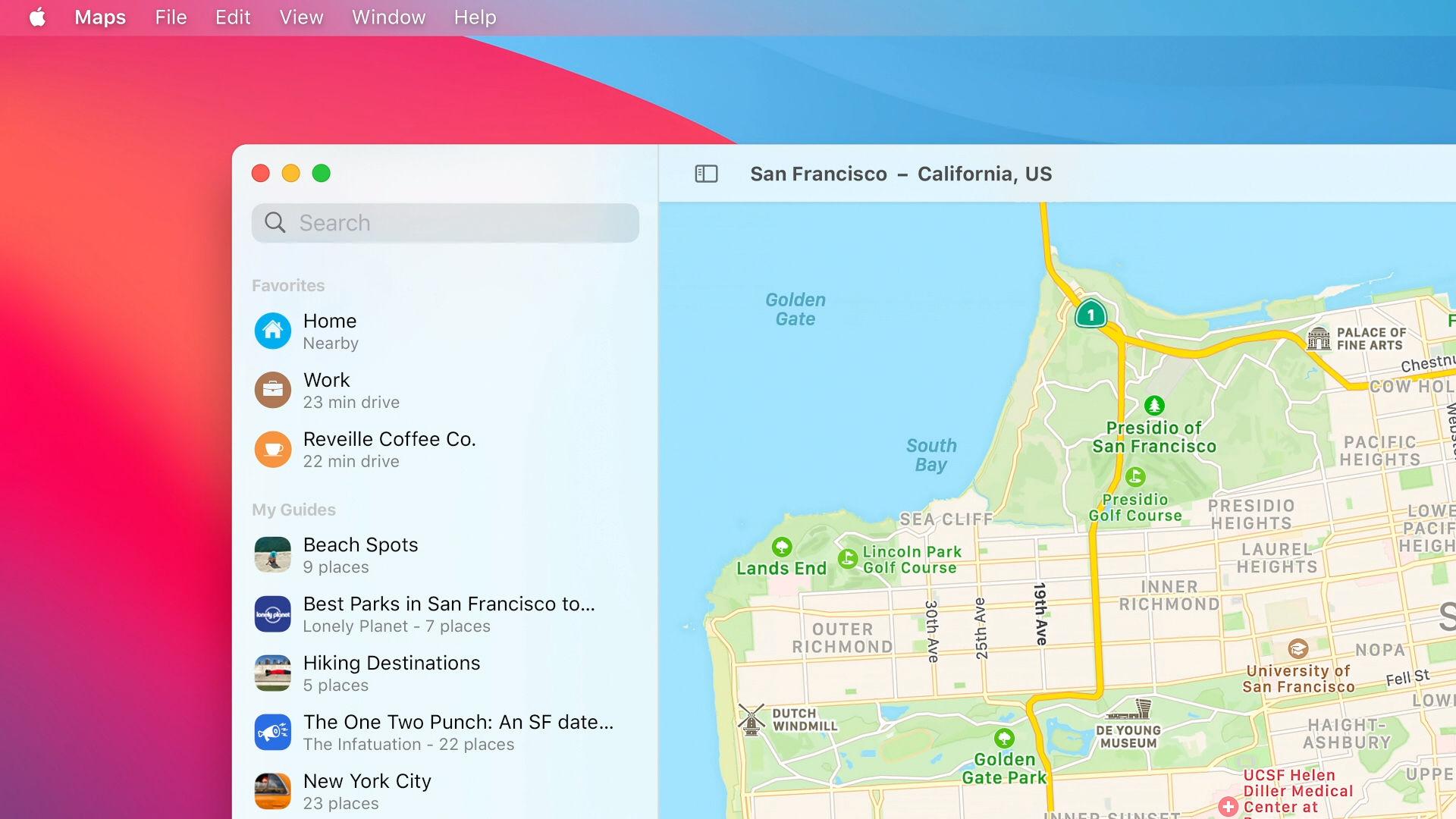 Pro: Messages is catching up with Messages

As with Maps, Messages is an app that came to the Mac from the iPhone (although you could argue that Messages began life as iChat on the Mac). The Mac and iOS Messages apps are pretty much joined at the hip, so you might think that when new features arrive in Messages on iOS they will also appear on macOS. Actually, that isn’t always the case, prior to Big Sur Mac users were unable to create Memoji, they couldn’t attach fun animations to messages (such as balloons or lasers), and they didn’t have access to the Gif and #Image library. Those omissions have been addressed in Big Sur.

In addition the macOS version of Messages gets the handy new pin feature that arrived in iOS Messages and means you can pin conversations with your favourite groups and individuals to make them easier to access. You’ll also be able to direct a response in a group chat to an individual and silence distracting group conversations. 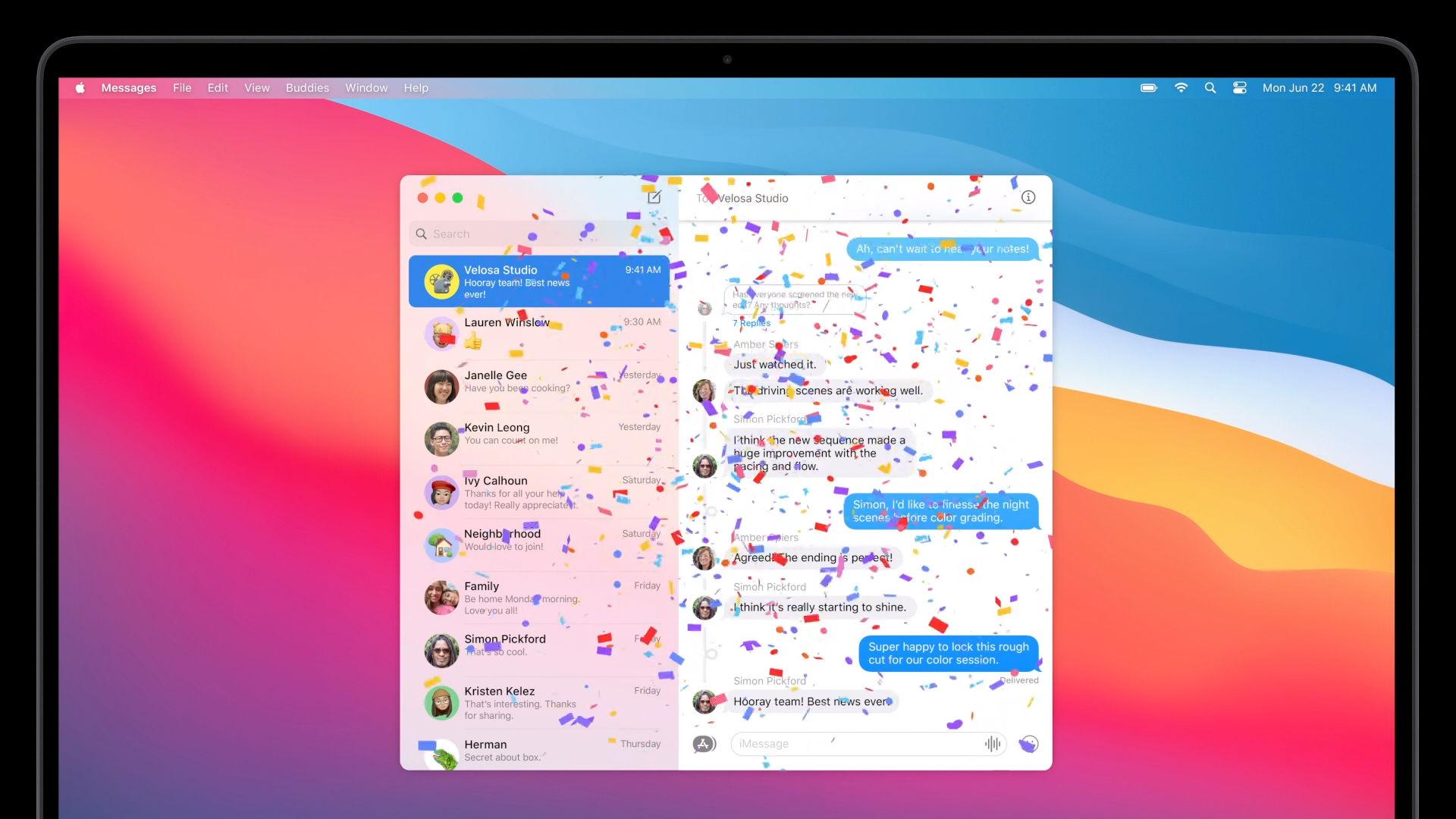 Apple’s expanding the information you can see about your battery with a new Battery section in System Preferences that is reminiscent of the Battery section in Settings on iOS. Here you’ll find data relating to the last 24 hours and also the last 10 days. You’ll see the times when your usage was most high.

You can also set when you want your screen to turn off while idle, set the screen to automatically dim when on battery power and turn the Power Nap feature on or off.

Unlike iOS it doesn’t seem to give you battery usage by app data – but theoretically this information can be gleaned from Activity Monitor so we would expect it to be made available eventually.

Another battery related change in Big Sur is a new optimized charging feature that is designed to extend battery life. Apple says it’s Optimized Battery Charging feature will learn your daily charging routine so it will be able to predict when your Mac will be connected to a charger for long enough to fully charge. This should avoid a scenario where the laptop doesn’t get fully charged before being unplugged again, meaning that it doesn’t get a full cycle. 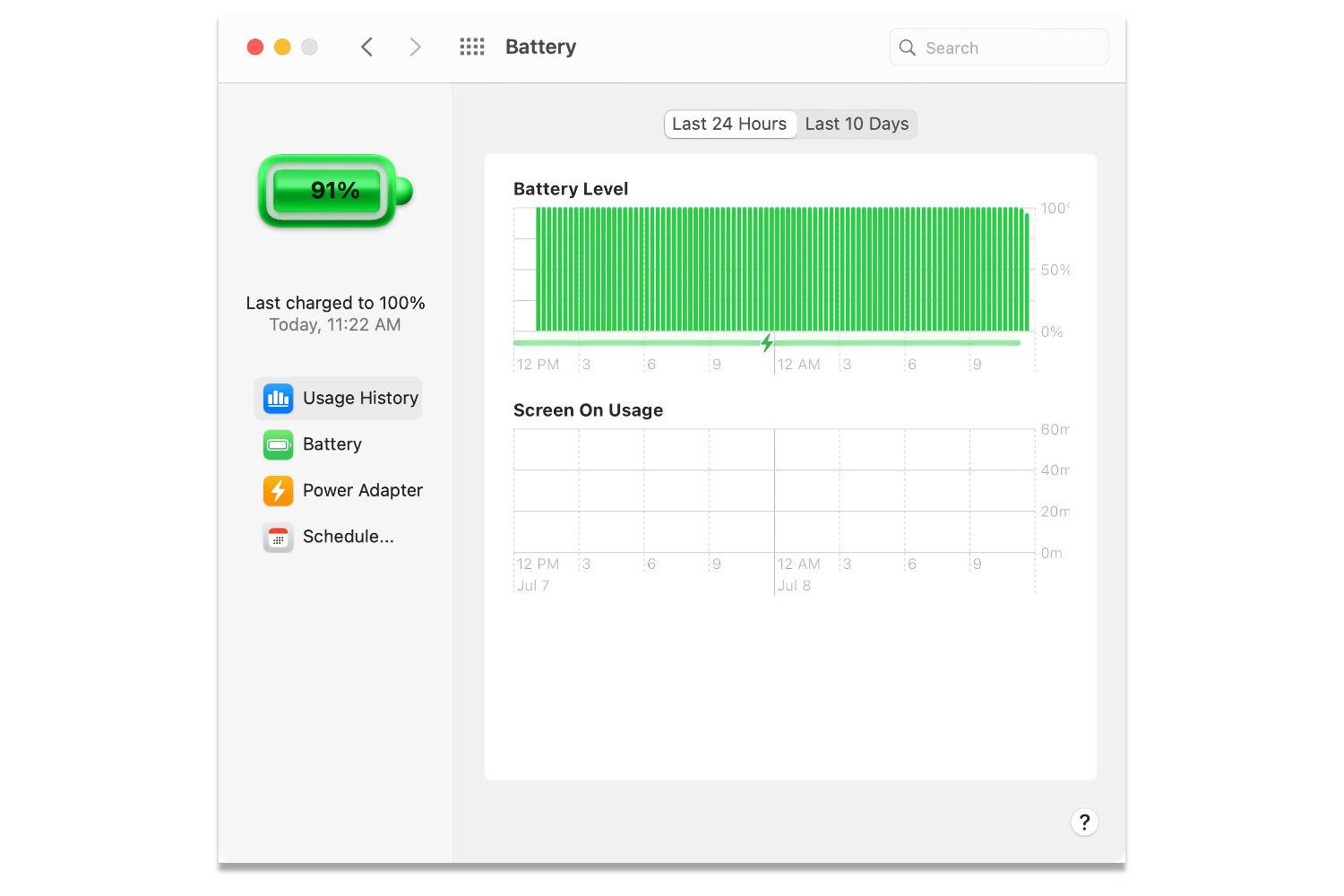 There are the usual raft of new security and privacy features in Big Sur. We’re being a bit unfair by listing them as a con here, because they are all good and positive additions to your Mac. It’s just a bit annoying to have the constant onslaught of windows confirming you want this and that to happen. In fact we’ve got so used to just clicking yes that one day we will probably end up agreeing to something we don’t want to happen…

You will probably encounter most of these new privacy related features when using Safari. Safari 14 isn’t actually limited to Big Sur – you can install Safari 14 on Catalina and Mojave too. That’s one reason why Safari isn’t included as a pro in this round up of the pros and cons of Big Sur – Safari 14 is not new in Big Sur.

The new privacy related features in Safari are good though. There is a new Privacy Report button that will give you a summary of the websites that have been caught tracking you. They will automatically have been blocked from doing so. That’s good or bad depending on your stance. Advertisers are up in arms of course (as are sites that rely on their money). 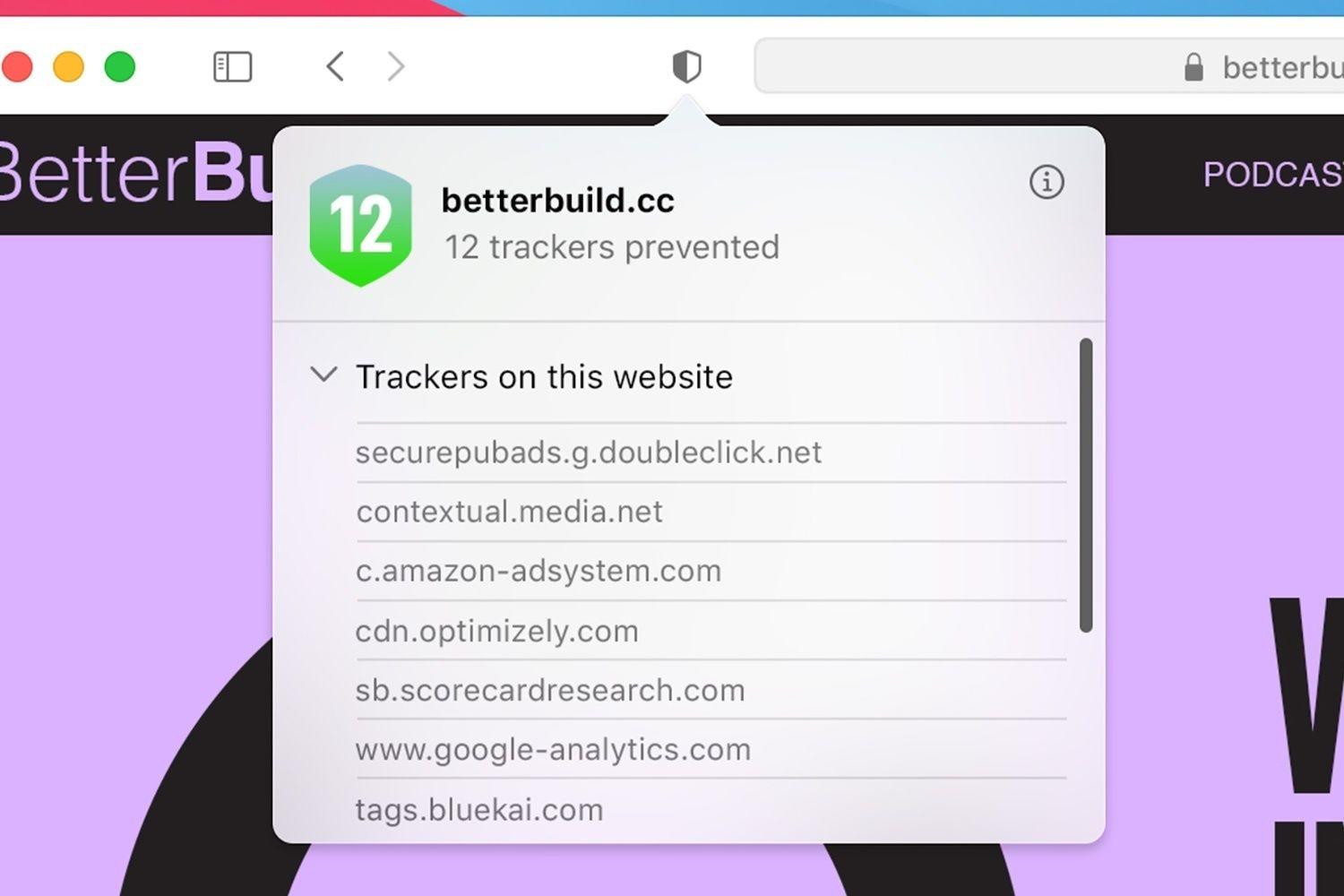 Don’t get us wrong with all these cons – we think that macOS 11 Big Sur is really going to improve our Mac experience when the final version arrives. The annoyances are far outweighed by the improvements that are coming and the new look (which we love).

But we just feel that this time round there isn’t anything to make us stop in our tracks. It’s a tidy up and a spring clean rather than a brand new macOS. The real changes are happening under the hood and until we get the Silicon Macs we won’t really benefit from them.

Ready to update? Read: How to update to Big Sur from Catalina, still not decided? Read: How macOS Big Sur compares to Catalina.