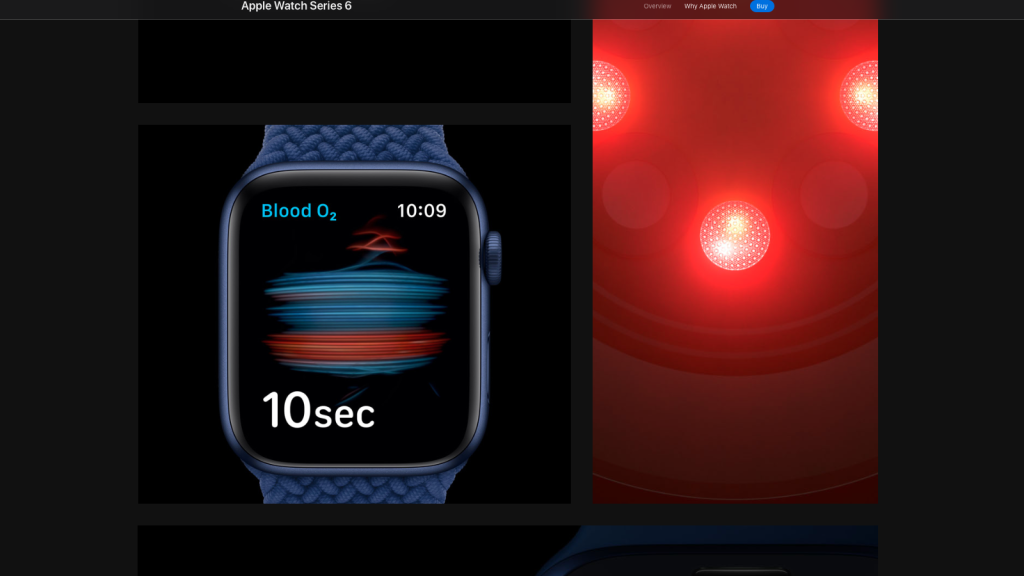 With the Apple Watch Series 6, Apple has introduced a new sensor that can measure the saturation of blood with oxygen. What is the data good for and who will it help?

Apple is introducing a new health sensor with the Apple Watch Series 6. It’s not a blood pressure measurement, which would be impossible to do without additional hardware, instead Apple is adding the ability to determine the oxygen saturation of the blood. This is something that competitors like Withings have been doing for a long time.

The Apple Watch Series 6 will be able to measure your blood oxygen level. It does this in the background every hour, as long as you agree to this in the settings (and are more than 18 years old).

Once you start to wear it the watch will gather this information and will store in the ‘Blood Oxygen’ area of the Health app. Now you have this data you may be wondering what you can do with it.

To answer these questions, we spoke to Dr Gregor Zimmerman, Head of Pneumology at Klinikum Rechts der Isar (the university hospital in Munich). A pulmonologist is a physician who specializes in the respiratory system. Here’s what we learned:

Basically, like other comparable devices, the Apple Watch can measure blood oxygen saturation with the help of its light sensors: A red blood cell, in which the hemoglobin is loaded with oxygen, absorbs light of a different wavelength than a red blood cell that does not carry an oxygen molecule. Depending on how much light of a certain wavelength (usually 660 and 940 nanometers, red and infrared light) is absorbed, the device can calculate what percentage of the blood cells are currently loaded with oxygen.

Apple states in its documents that 95 to 100 percent blood oxygen saturation is normal or healthy. Dr Zimmermann would be particularly concerned about values below 90 percent.

There is one big but though. The Apple Watch 6 with its new function, and all other comparable fitness trackers, are not medically tested. It is currently not possible to say how accurate these measurements are. The doctor hopes that studies will be published in the near future that shed a little more light on the question of the measurement accuracy of such devices.

Of course the desire to measure blood oxygen isn’t only limited to doctors and such meters are not only found in hospitals or doctors’ offices.

People can use such trackers to observe how their body gets used to the lower air pressure and, consequently, to the reduced availability of oxygen in the air.

As another example, Dr Zimmermann mentioned sleep apnea – when breathing pauses in sleep. Since the initial symptoms, such as breathing pauses or snoring, occur while sleeping a person does not notice for themselves that they may have a health problem. If an Apple Watch or other device indicates that the oxygen measurement values are outside the norm the person can observe these values more carefully and act on them if necessary.

However, a continuous measurement of the blood oxygen content would be more meaningful here, explains Zimmermann.

Measuring the value is also important for other clinical pictures: Infants in the risk group for sudden infant death syndrome are given an ear clip that reads out these oxygen values.

With COVID-19, too, one observes patients with a mild course in terms of their blood oxygen values: If this value suddenly falls below the normal range, it may be possible to react early to a severe course with timely measures and prevent consequences such as artificial respiration.

What to do if you have low oxygen levels

How should you react if you receive a warning from your Apple Watch Series 6 that the oxygen level in your blood is too low? According to our pulmonologist, the first thing would be to assess how you are feeling in that moment. If no further complaints occur, you can possibly check in a doctor’s office and use the doctor’s own device to determine whether the warning is correct.

When asked if he is not afraid of many “false positives” visiting his office, Zimmermann replies: “You have to take every patient seriously. That’s what we doctors are for.”

Interestingly, a study has shown that the Apple Watch can detect COVID-19 before you know you have it.