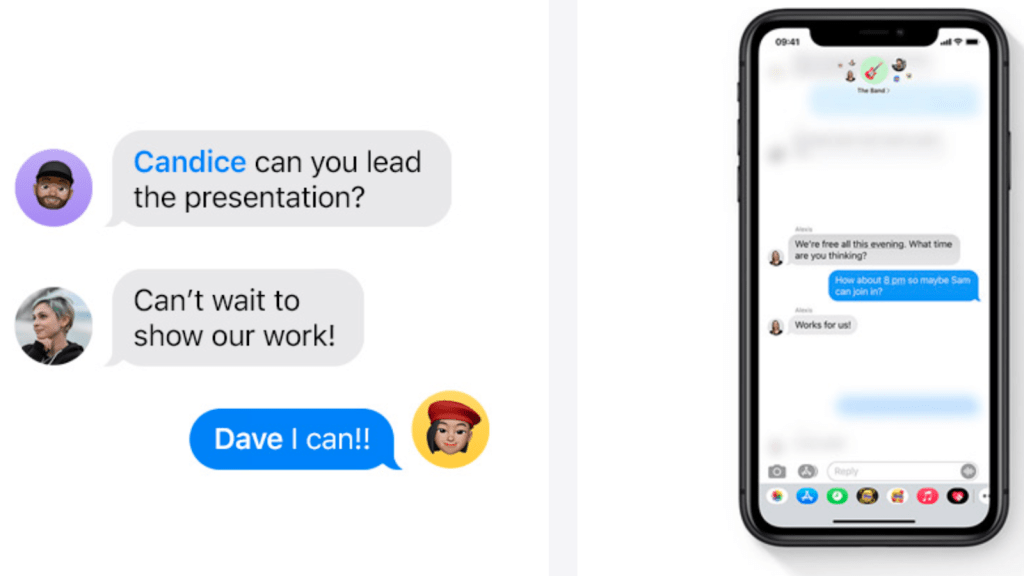 iMessage is one of Apple’s most important services, and Apple has added a number of new practical features in the iOS 14 system updates.

Of all of Apple services, iMessage (the secure, internet-based alternative to texting that since its launch in 2011 has attracted users to switch to – and avoid switching from – the platform) perhaps contributes more than any other service to the “lock-in” to the ecosystem around iPhone, Mac and iPad.

Therefore, it is no wonder that Apple is investing heavily in improving and expanding the features of iMessage. This year’s updates to iOS 14, iPadOS 14 and macOS Big Sur bring significant improvements.

We also have this detailed guide to sending text messages on iPhone that might be helpful.

How to use filtering in Messages

Known senders is anyone in your contacts and phone numbers you have sent messages to. For example, if you answered when someone unknown asked you about something you were selling on Gumtree that conversation counts as known senders even though it is only a telephone number. You will find that two-step verification numbers from a website will go to unknown senders, though.

To change from All Messages to Known Senders or vice versa tap on Filters in the top left of the Messages app.

If you don’t see the word Filters, you need to enable it by going to Settings > Messages and enable Filter Unknown Senders.

How to Pin your favourites

Another new feature is the ability to bookmark up to nine different conversations, either with individuals or group chats. You will find these pinned conversations at the top of Messages in the form of large icons.

This is handy because you do not have to rummage around or search the list to find them every time you wish to contribute to the chat.

This is especially useful if you are chatting with many contacts all the time but occasionally return to the same people over and over again. For example, you may not write to your mum every day, but you may often want to find her among all the conversations.

Pin conversations are synced across all the devices you are logged in to.

The icons for these pinned conversations are dynamic and can, for example, show when someone has started writing a message (this could be a speech bubble coming out of their mouth if the person has their face or a memoji as a portrait).

To pin a conversation you can either swipe from left to right on it in the list and press the yellow button with a pin icon that appears, or press and hold the message and select Pin. The conversation will then end up in the area at the top where all pinned conversations reside. 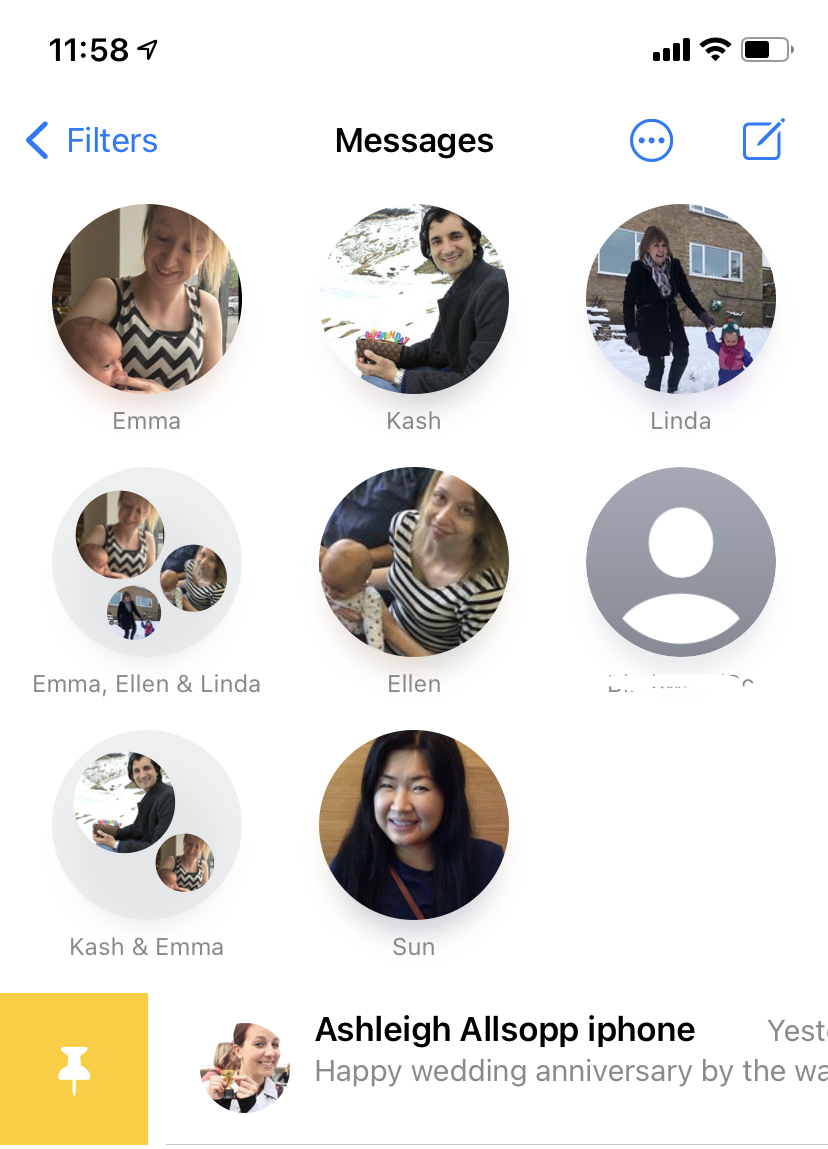 If you later want to remove it from there, press and hold the icon and then select Unpin.

You can have a up to nine pinned conversations, which on the iPhone takes up a large part of the screen when you open the app.

How to answer threads

Another new feature in iOS 14 is the ability to reply to a person’s comment in a group message. To do so you need to press and hold on the message you want to reply to and select Reply to start the reply thread.

Replies are hidden in the reply thread, but you can read them by clicking on the text “X Replies” that appears in the original message. 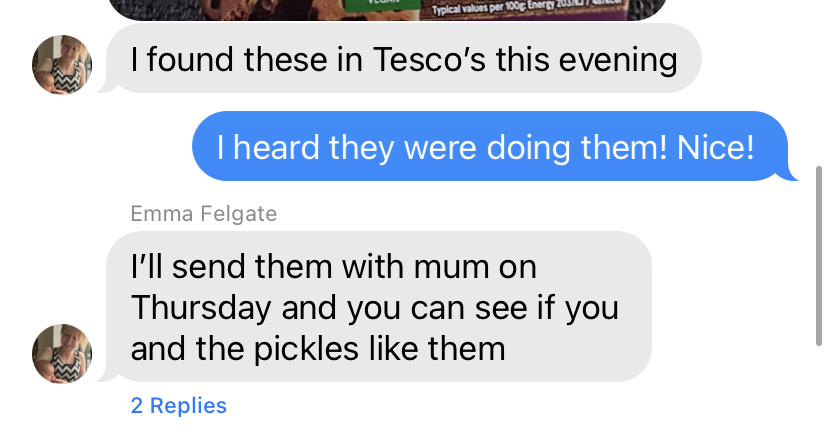 You will also see the exchange in the conversation at the point at which it happened. 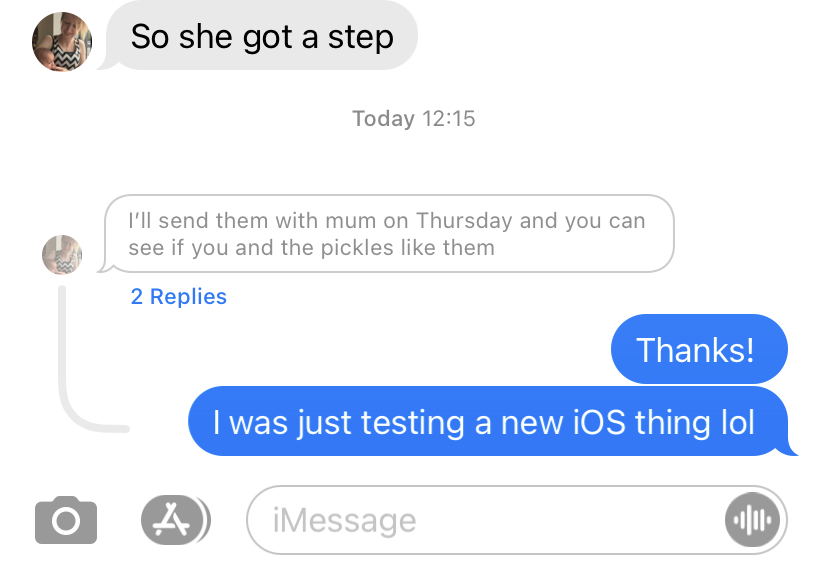 This means that threaded responses are displayed as usual in users who have not updated, a form of backward compatibility that is of course absolutely necessary so as not to make everything very complicated for both servers and individual devices. But the result can be a bit confusing for those who are used to other chat apps where answers in threads only appear in the thread itself.

For those who have updated to iOS 14 or any of the other new systems, answers in the conversation are displayed along with the message it was a response to.

How to do @ mentions

We also gain the opportunity to mention other people and thereby attract their attention in a message thread.

Unlike on most other platforms, you do not need to use the @ symbol to name someone, it is enough to enter the person’s name and press it when it turns grey. However, you can choose to use @ if you want, and if you do so it will automatically turn the name into a mention.

If you want to adjust this setting you will find it in Settings > Messages. Here you will find a Notify Me setting to always receive notifications if someone mentions you.

With this setting on you will be able to turn off notifications for a large group chat and still receive notifications when it really matters to you.

To turn off notifications for a conversation, swipe left on it, and press the purple button with a crossed-out bell (illogically while the bell is crossed it seems to signify that it will notify you). That particular chat will show a crescent moon to show that it is set not to disturb you.

How to set a name and picture for group chats

In addition to giving a group chat a name, you can now select a unique icon for the chat to more easily distinguish it from many conversations.

You can select a photo, a memoji, an animoji, an emoji or just a letter as an icon, and can also select the background colour.

Users who have not updated to the new systems will not see the new icon, but for those who have updated, your changes will appear for all participants.

How to find the right emoji

In the past, iOS has not had an easy way to search among available emoji. You have either had to type words and see if a suitable emoji appeared for that word, or you had to scroll through all the options available in the emoji keyboard.

On the Mac, there has always been a search box in the emoji pointer, and it now also comes to the iPhone and iPad. It’s a feature you will be surprised wasn’t there before.

In the past, Messages on Mac has been a pale copy of the iOS version, and it’s been a while before many news items have found their way into the applications (if any). But this year, Messages for Mac finally gets a much-needed refurbishment and support for many of the features that previously only existed on iOS.

Messages in Mac OS Big Sur support all the new features we write about above (except emoji search, which has been around for a long time on Mac, and the ability to only see messages from known or unknown senders).

In addition, the program receives the following features that were already on iOS:

Note: There is an issue with notifications for messages not being shown in iOS 14.