Just like clockwork, a new Apple Watch is here. Almost exactly a year after the Series 6 launched, we’ve got our first official look at its successor. Predictably, it’s known as the Watch Series 7, although there are a handful of useful upgrades.

These include a new flatter display, with slimmer bezels and two new screen sizes. This means there’s space for a full keyboard now, while IP6X dust resistance is added to the existing WR50 waterproofing. You also get significantly faster charging and fall detection while cycling, as well as a new range of colours. The Series 7 is still compatible with existing Apple Watch straps and bands, though.

In this article we’ll run through everything you need to know about the Apple Watch Series 7, including its design, tech specs, release date and pricing.

If you are reading this on mobile please click here for the latest version of the story.

When will the Apple Watch Series 7 be released?

The Watch Series 7 was announced at Apple’s ‘California Streaming’ event on 14 September 2021.

We’d usually expect a release date or pre-orders to be confirmed at the same time, but this wasn’t the case. Apple simply stated that the Series 7 would be available ‘later this fall’, but we don’t have anything more specific.

That means you can expect the Watch Series 7 anytime before the end of November 2021. There will likely be a pre-order window 1-2 weeks before the device goes on sale. Apple may reveal more if it holds further events over the next couple of months – we’ll update this article as soon as we know more.

Perhaps this shouldn’t come as a surprise. Reports had indicated that Apple was struggling with production problems for the Apple Watch Series 7. Apparently the new design and a new lamination process for the upcoming Apple Watch generation was causing manufacturing issues.

Over the past three years pricing on the Apple Watch series has held reasonably steady – last year there was a slight drop in price for the UK market. At launch the previous three models were priced as followed:

Apple has updated the design of Watch Series 7, representing the biggest aesthetic changes we’ve seen for years. The most noticeable change is apparent immediately – the Watch Series 7’s display now extends almost all the way to the edge of the watch face. 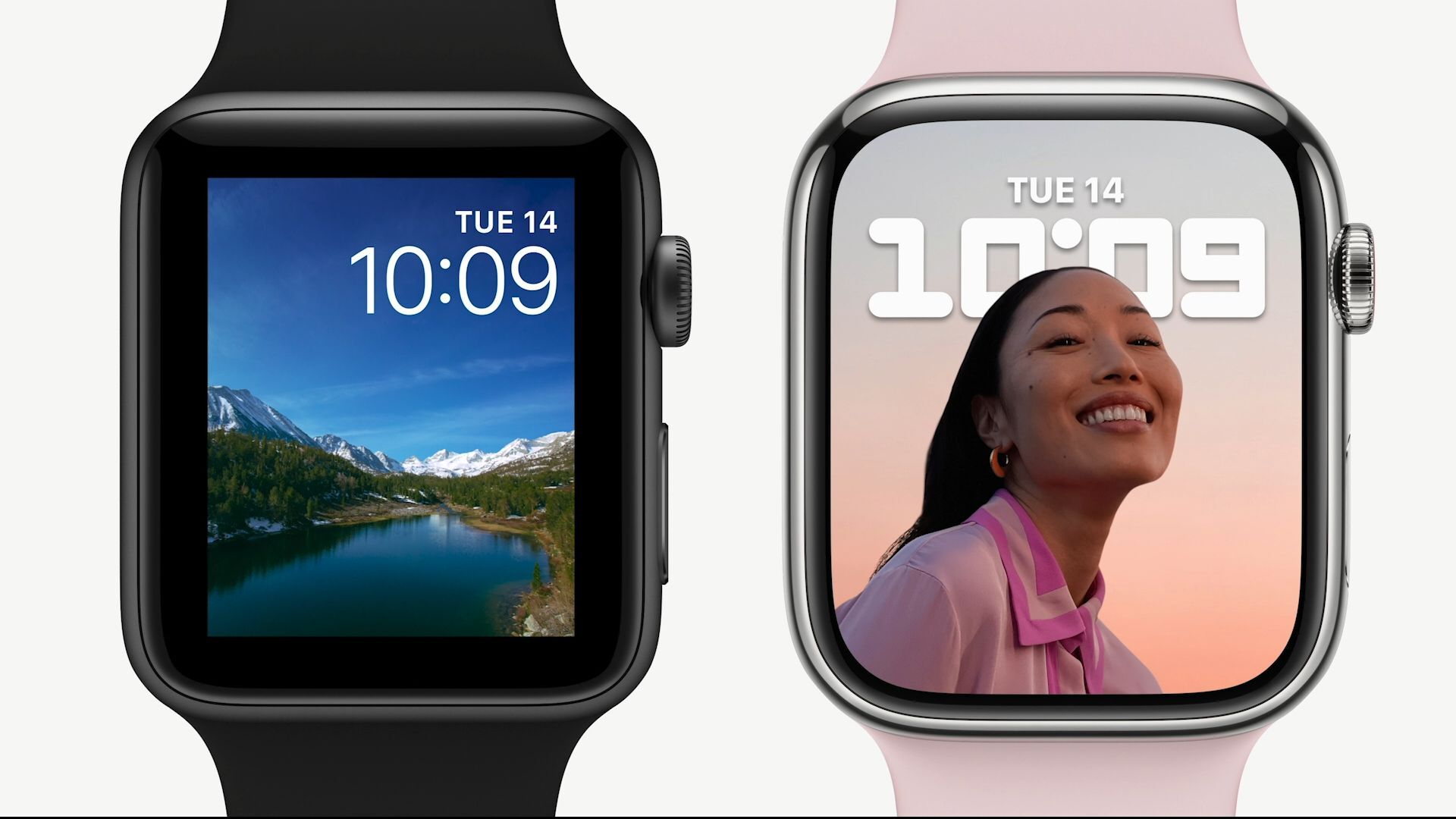 This is made possible thanks to a significant slimming of the bezels. At 1.7mm thick, they’re 40% smaller than those on the Watch 6. It gives the Watch 7 a more modern design, without any noticeable changes to the total footprint of the device. Indeed, the new watch is still fully compatible with Watch 6 straps and bands.

The Apple Watch Series 7 will be available in 41mm and 45mm screen sizes – up from 40mm and 44mm on the Series 6. It’s a subtle change, but one that could make a big difference to the usability of the device.

Indeed, Apple says the the Series 7 offers almost 20% more screen area than its predecessor. It also means there’s now room for a full-size keyboard, which works using both swipe gestures and regular tapping. It’s a useful alternative to the existing voice typing and scribble options while texting or composing an email. 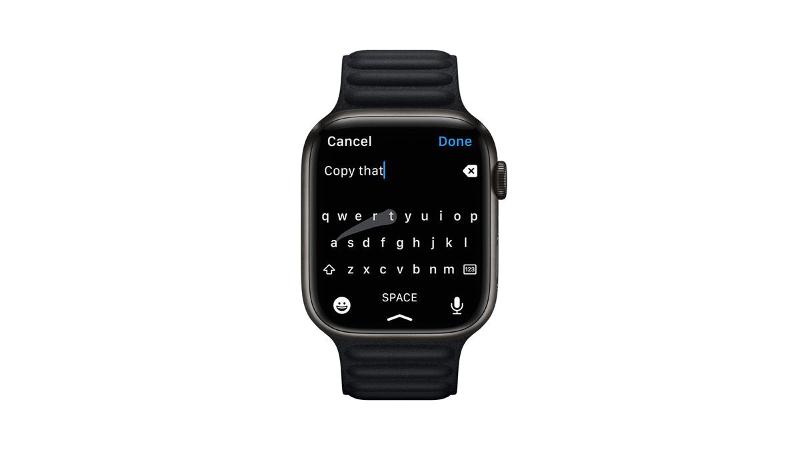 The Always-On display has also had an upgrade. It’s now 70% brighter when indoors, making it easier to quickly glance at the time or notifications.

Apple is also touting the toughness of the Watch Series 7. It’s apparently the company’s most durable watch yet, with a thicker front glass that’s more crack-resistant. Apple assures us this will have no effect on the viewing experience.

The watch also now boasts IP6X dust resistance – that’s the highest rating a wearable can get. Alongside the existing WR50 water resistance, it’s now being pitched as a device which can be used anywhere without worrying about damage.

Improved battery life was rumoured to be coming to the Watch Series 7, but that hasn’t materialised – Apple still claims 18 hours of typical usage on a single charge.

An area that has been upgraded is charging speeds. A new USB-C magnetic pad enables 33% faster speeds than the Watch Series 6. Apple says you can go from 0-80% in just 45 minutes.

The Watch Series 7’s new fitness features focus on those who regularly ride a bike. Cycling is one of the modes that can now be triggered automatically, as well auto-pause and resume features. 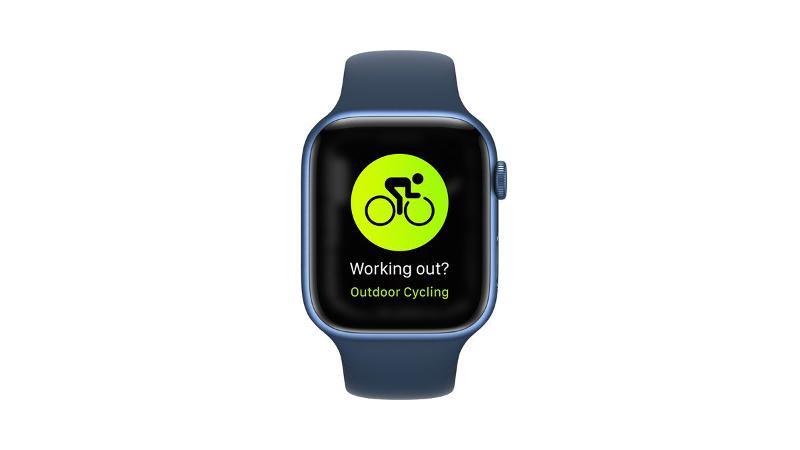 Fall detection, a safety feature introduced in 2018, will also now detect falls while working out.

Whenever the Watch Series 7 ends up being released, it’ll be running the final release of watchOS 8. 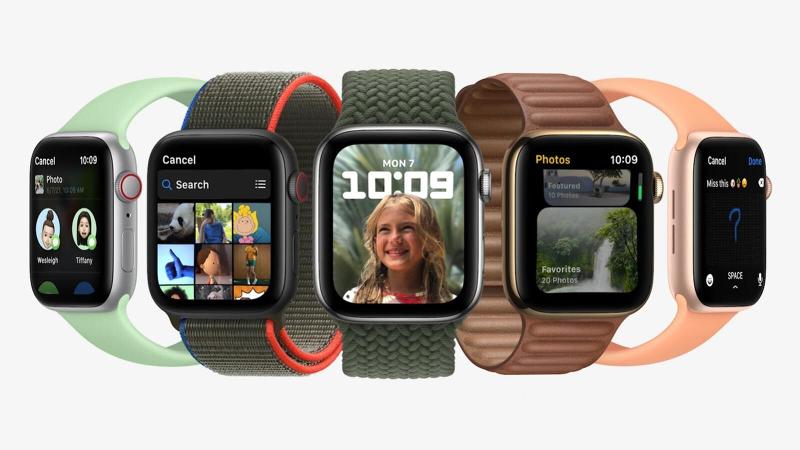 Announced at WWDC in June 2021, Apple’s latest software update focuses on photos and messaging, health, sleep, keeping fit and mindfulness, plus better support for smart home kit and some new Apple Wallet features. Plus there’s Assistive Touch, which allows you to control the watch using gestures, and on-device recording for Siri.

Among the most interesting new features are the fact Apple Watch will get the iPhone’s Portrait Photos mode, allowing you to display even better images of your friends and family, plus the rebranding of the Breathe app as Mindfulness, which now includes a Pause to Relax mode with calming animations and the addition of a Mindful Minutes summary.

For more details on watchOS 8 see our dedicated article.

That’s all the new Apple Watch news for the time being. Be sure to keep checking back: we’ll update whenever a concrete release date is revealed.

Finally, for broader information about Apple’s plans for the coming year across all of its product categories, take a look at our guide to the new Apple products coming out in 2021.