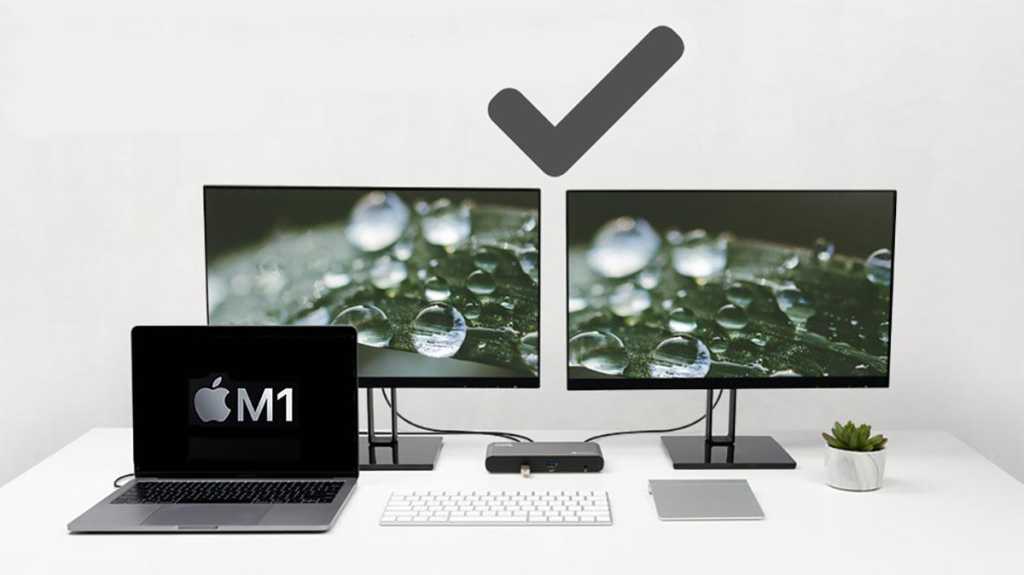 Apple’s range of MacBooks that use the company’s own Silicon M1 processor cannot natively connect more than one external monitor, which is a massive limitation on the previous Intel-based generation of Mac laptops that could run two displays when connected to a USB-C or Thunderbolt 3 docking station or hub.

However, there are ways around this M1 limitation, allowing you to run two external displays off an M1 MacBook, which we will outline here. There’s a software driver plus hardware adapter workaround and a hub or adapter workaround.

With the software workaround, there are some risks involved as you will be required to install third-party drivers, and these might later be unsupported by future updates of the macOS. And you will likely have to buy at least one adapter, where previously a dock plus a display cable per external screen would have sufficed.

The hardware solution involves a dual-HDMI adapter that requires a little tinkering in System Preferences at setup.

M1 owners, start saving for a new MacBook Pro or read on.

Apple’s Mac mini, MacBook Air, and MacBook Pro 13in were the first Macs to feature the Apple-designed M1 CPU. They received rave reviews for their speed improvements over Intel-based laptops, including here on Macworld.

But if your MacBook setup includes running more than one external display, you have a major problem. Apple’s M1 chip simply won’t consider it – at least natively.

Apple has apparently promised to fix the problem in a future macOS update, but the arrival of the later M1 pro and M1 Max suggest that M1 owners could be waiting a long time. We have this guide to Monitors for M1 Macs and what you need to know before buying.

Docking station manufacturer Plugable suggests using a combination of display technologies to get around the M1 MacBooks’ single-monitor limitation. This should work with most third-party docks, although manufacturers don’t recommend it.

Plugable’s multi-display docks use a combination of native USB-C Alternate Mode (native “Alt Mode” video output) and DisplayLink technology. This combination serves as a workaround to the M1 platform supporting only a single external display via USB-C.

Note that DisplayLink requires a third-party driver to be installed on the Mac. There are different versions of the DisplayLink driver, and some bring their own compromises to the party.

And this solution still requires an extra hardware adapter.

DisplayLink Manager Graphics Connectivity App v. 1.1.0 is compatible with macOS Catalina 10.15 and macOS 11 Big Sur. It can be managed via the DisplayLink icon in the Apple Menu bar.

Installation is straightforward, but note that this version does not support laptops’ closed-display/Clamshell mode.

Other limitations include incompatibility with display rotation.

There’s an option in DisplayLink manager to “launch at startup”, or you can drag the DisplayLink Manager to your Login Items in Users & Groups.

Note that M1 MacBooks can run in Clamshell Mode (meaning with the lid closed) with Displaylink attached monitors, but Intel-based MacBooks can’t and the displays will shut off when the laptop lid is closed if using DisplayLink. This won’t matter that much as Intel MacBooks can run two displays without DisplayLink, although they will need DisplayLink to add three or more monitors.

2. Then connect the MacBook to a dock, such as the Plugable UD-ULTC4K Triple Display 4K Docking Station or the Caldigit TS3 Plus dock. Learn more about the best Thunderbolt 3 docking stations for more details, or you can connect via a simpler USB-C hub.

3. For the first screen you can connect via the dock’s DisplayPort or HDMI Port, and this will be handled natively by the M1 MacBook.

You could also connect the first external display via a Thunderbolt 3 or USB-C to HDMI or DisplayPort adapter.

The HDMI or DisplayPort output uses Alternate Mode (Alt Mode), and as it is basically a pipeline directly to the system’s native GPU, it will behave just like if you hooked up a USB-C to HDMI dongle to your laptop. This requires no user driver installation.

4. Additional displays cannot be handled natively by the M1 MacBook.

You need to attach the second or third display via one or more of your dock or hub’s USB-A ports, using an adapter such as StarTech.com USB 3.0 to HDMI / DVI Adapter. This costs £80 or US$80, so needs to be factored in when pricing an M1 MacBook purchase if you require multiple monitors.

This adapter turns an available USB-A 3.0 port into one DVI-I or VGA port (DVI to VGA adapter included) and one HDMI output. Each display can simultaneously support the maximum resolution of 2048×1152 at 60Hz.

Make sure to use an active HDMI DisplayLink adapter that can support 4K at 60Hz, as some are limited to 4K at 30Hz.

DisplayLink uses an installed driver and the system CPU and GPU to convert graphics data on the system into USB data packets. That USB data is then sent over the USB cable as data packets, and converted back to video information and output to the monitors via the DisplayLink chip in the docking station. 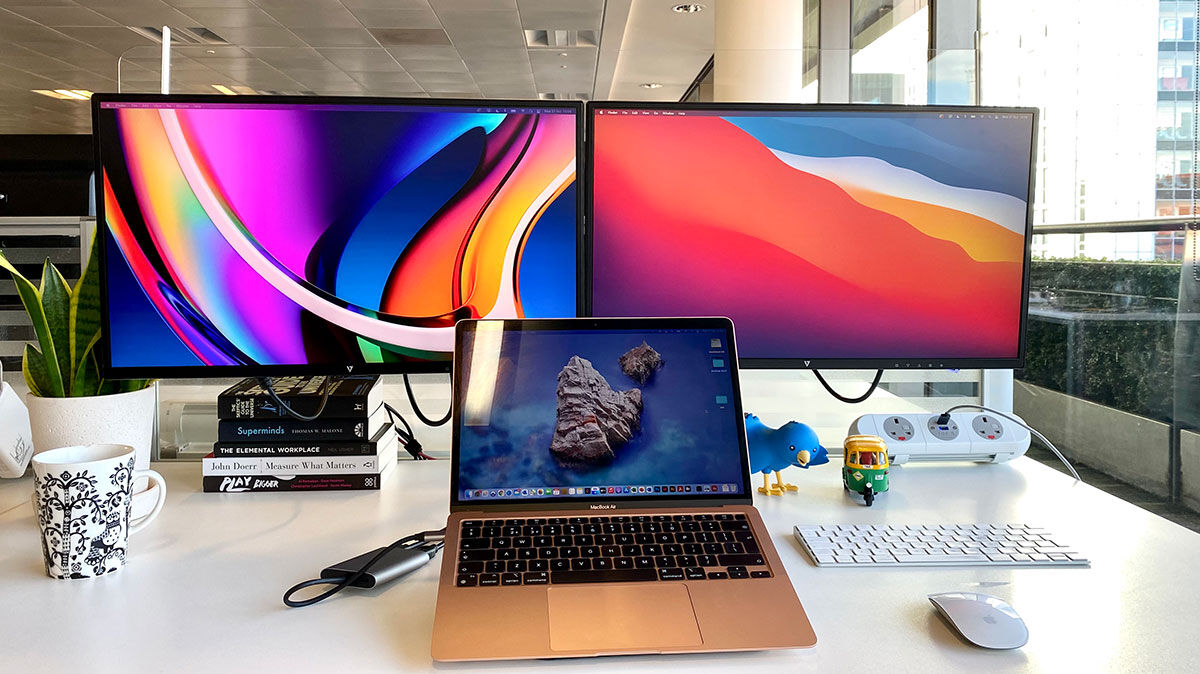 Accessory maker Hyper sells two hardware solutions that allow you to add more than one display to an M1 Mac.

Hyper says that these work “without having to download cumbersome drivers” but there is some software installation involved, and you need to allow InstantView access to your Privacy settings in System Preferences. You connect the hub or adapter to your M1 MacBook and find the HyperDisplay app that appears in a Finder folder sidebar. Double-click the macOS InstantView icon and follow the System Preferences instructions. Once this has been completed your MacBook will automatically recognise the adapter from then on.

The Dual 4K HDMI 3-in-1 USB-C Adapter ($129.99) features two HDMI ports and connects to your M1 Mac via its integrated USB-C cable. A further USB-C PD port allows you to charge the connected laptop at up to 100W – handy as the adapter itself uses up one of your M1 laptop’s two Thunderbolt ports.

A more fully fledged solution is the Dual 4K HDMI 10-in-1 USB-C Hub ($199.99), which boasts 10 ports, including the two HDMI ports and 100W PC port seen on the cheaper adapter, plus Gigabit Ethernet, 3.5mm Audio Combo Jack, SD and MicroSD UHS-I card readers, and two USB-A (5Gbps) ports. It too connects to the laptop via an integrated USB-C cable. Of the two, this multi-port hub is better value as you can use it as a dock when it’s connected to a decent USB-C PD wall charger.

Buy direct from Hyper. Shipping to the UK is currently a steep $66, so factor that in if you are not based in the US.

Note that neither Plugable nor Caldigit officially supports such a DisplayLink setup for Macs. The solution works, but they warn that this could become unstuck in future versions of the macOS.

Whenever there is a new OS update the drivers may need to be updated each time.

Plugable doesn’t recommend the workaround for gaming, video editing, digital audio workstations (DAWs), and protected-content (HDCP) playback. For these workloads, users will want the full throughput of a “bare-metal” native GPU connection – such as provided by the DisplayPort or HDMI port on the dock using Alt Mode.

Caldigit actively recommends against using DisplayLink, as it finds it unreliable and there would be no synergy between the driver and the dock. Because it requires a third-party driver, users are at the mercy of Apple and the third-party developer to support later versions.

The only risk is that it could stop working at any time, although it wouldn’t harm your system if it did.

So it’s a workaround with a potentially limited timespan but the likelihood is that compatibility would be restored at some stage if the worst happened and you would get back your multi-monitor setup.

If you are wanting to use a second display with your Mac and not have your Mac’s screen on, read our feature How to turn a Mac’s screen off.