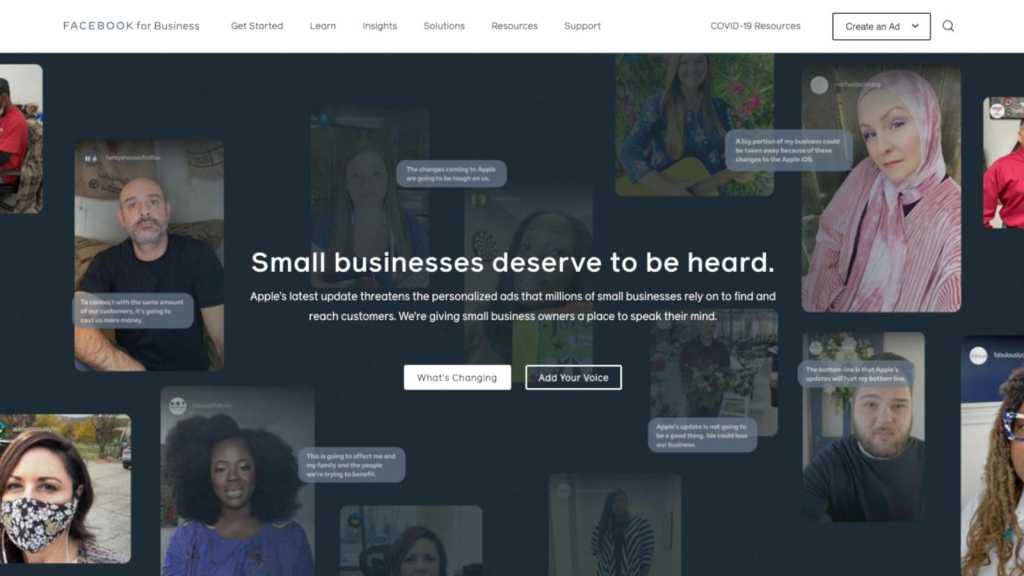 In large adverts in the American press, Facebook has accused Apple of destroying the advertising market for small businesses by allowing users to stop the collection of user data in an upcoming update of iOS. Facebook contends that this prevents companies from providing consumers with targeted ads.

Apple has now responded to Facebook’s criticism. The Verge has published Apple’s full statement in which the company argues: “This is a simple matter of standing up for our users. Users should know when their data is being collected and shared across other apps and websites – and they should have the choice to allow that or not.”

Facebook has a controversial record when it comes to user privacy. Instagram, which it owns, blamed a bug when iOS 14 warned users that the camera was active, even though they were just scrolling through photos, and Facebook itself strenuously objected when iOS 14’s new privacy features were unveiled in the summer. Apple, by contrast, made privacy the central theme of its iPhone adverts this autumn.

This is not to say that Apple is above criticism, nor that Facebook does not have a point. Our colleagues on Macwelt look at the debate from both sides:

“It is good and right to criticise Apple for misconduct: the company is now so big and influential that some changes can only happen under pressure from authorities, users, the press and the competition. However, Facebook is no longer a cool startup, but a digital giant in the same league as Apple, Google and the like.

“And while, like Epic Games, Facebook claims to give a voice to the small companies that are suffering under Apple’s regulations, the company leaves out its own interests in this line of argument: its business model consists almost entirely of advertising revenue.”

The battle is far from over. Facebook will publish another ad this week in which it will claim that Apple’s privacy check will change the internet for the worse.

And the policy change at the heart of the disagreement – which means that apps will request users’ permission to track them – will not be implemented until some time early next year. It was supposed to be in place when iOS 14 was released, but Apple backed off to give app developers more time to adapt to the new rules.

Since we wrote this article, Apple CEO Tim Cook has responded to Facebook’s criticism on Twitter, saying: “We believe users should have the choice over the data that is being collected about them.”