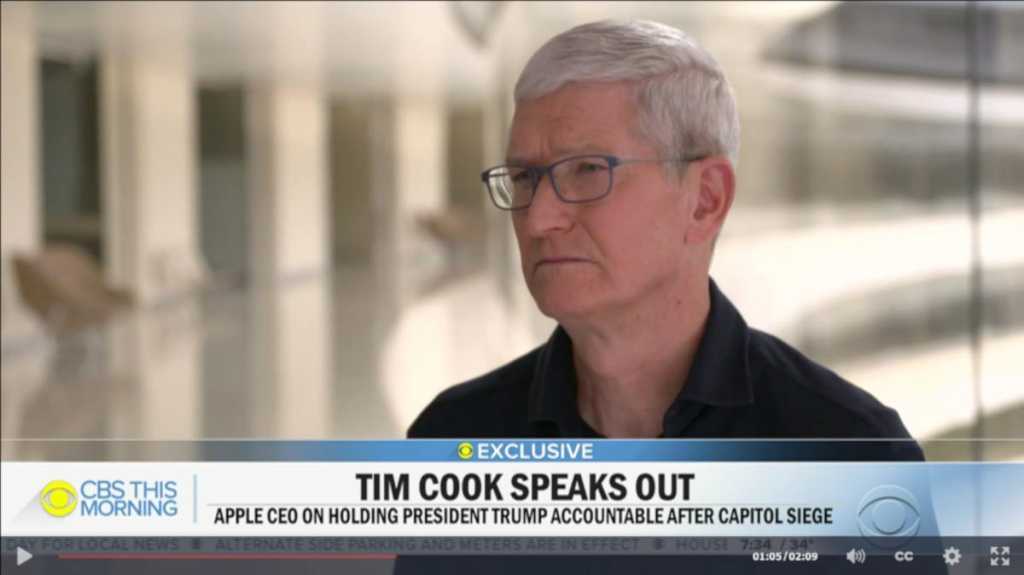 In a pre-recorded interview with CBS This Morning, set to air in the US on Wednesday morning (or Wednesday lunchtime UK time), Tim Cook will make what co-host Gayle King has described as a “big announcement”. King was keen to point out that it’s not a new product – “don’t get everybody excited,” joked a co-presenter – but claimed it’s something “bigger and better” than that.

(Update: The interview has now aired. Cook announced a range of new projects under Apple’s Racial Equity and Justice Initiative, to which it committed £100m last summer.)

CBS’s teaser clip shows Cook fielding questions about last week’s political turmoil in the US and the consequences that he feels should attend it (“no one is above the law,” he says, avoiding a straightforward denunciation of President Trump but making his feelings reasonably clear). But King was quick to acknowledge that this was a supplementary topic Cook was willing to broach, rather than the central focus, which is Apple’s announcement.

If it’s not a product, what could it be? Team Macworld have been racking our brains for likely announcements, and have come up with a few options:

Apple has been involved with the global response to COVID-19 in various ways, including track-and-trace, fundraising (via its partnership with Product Red) and the design of face masks. Apple might announce something new in this area.

It could be to do with vaccine manufacture or distribution, although the company would face regulatory obstacles. The most likely announcement would probably be an expansion of its fundraising efforts or a major donation.

Roman Loyola, a colleague on Macworld US, points out that in the US, Martin Luther King Jr Day is on Monday. “I’m guessing Apple will announce some sort of initiative related to that,” he says, “akin to what it did on Veterans Day.”

Oddly enough this one might end up fulfilling one of Donald Trump’s recurrent demands: that Apple bring its manufacturing back to US shores. (“We’re gonna get Apple to start building their damn computers and things in this country,” he said in 2017.) It would be more than a little ironic if the company ends up announcing this just as the lame-duck president is ushered out of the door.

US manufacture, though, is an expensive business in comparison to the Asian supply chain that Apple currently depends on. If the company is making changes to its manufacturing I think it’s more likely to be switching focus from China – because of questions over human rights – to Vietnam and India, where it already has some supplier partners.

Apple has a mixed record on the environment, as I discussed at some length in Why Apple was bad for the environment (and why that’s changing). But in recent years it’s definitely become a better eco citizen.

Last summer we heard that all Apple products will be carbon-neutral by 2030, and the company may have further announcements along those lines.

Apple takes education seriously. Unsurprisingly, given how many Apple devices are bought by schools and students. (If you’re in education you can get a discount.)

In 2018 the company held an education-focused event in a school, introducing a new iPad and making some education-focused software announcements. That won’t happen tomorrow (although the new iPad mini is somewhat overdue…) but the relevance and importance of home learning under current circumstances could lead Apple to announce an initiative to help people access learning resources online.

Is Apple building a new headquarters? Is Tim Cook retiring? (It’d be a bit mean to describe that as “better” than a new product, unless Apple is spinning it as a promotion to the board.) Is Apple making a really big acquisition – a car manufacturer, say?

Basically we have no idea, and we’ll be tuning in tomorrow to find out more – so the teaser has done its job. Unfortunately it’s hard to be sure exactly when the interview will be aired, since CBS This Morning is a lengthy show: it’ll run from 7am to 9am ET (that’s noon until 2pm UK time). On second thoughts you might be best catching up on the news afterwards, right here on Macworld.co.uk.

For details of other upcoming announcements, visit When is the next Apple event?