Ever since Apple discontinued its last consumer display back in 2016, there have been rumours of a new one in the works. The company finally delivered at its Spring ‘Peek Performance’ event, revealing the brand-new Studio Display.

It’s a 27in 5K monitor, complete with some of the best video and audio features you’ll find on any display. But the Studio Display is designed to be used with the new Mac Studio, a high-end desktop PC powered by Apple Silicon – with top-spec models using the brand-new M1 Ultra.

Here’s everything you need to know.

Apple announced the Studio Display alongside the Mac Studio, updated iPad Air and third-gen iPhone SE at its ‘Peek Performance’ event on 8 March.

For more options, see our separate article on where to buy the Studio Display.

As you might expect, the Studio Display doesn’t come cheap. It starts at £1,499/$1,599, but you can easily pay significantly more. Here’s the full breakdown:

Let’s start with the basics. The Apple Studio Display is 27in monitor, complete with a 5K retina display. As usual, Apple doesn’t quote a specific resolution, but it does cover the full P3 colour gamut and reach a maximum brightness of 600 nits.

It supports Apple’s True Tone tech, which automatically adjusts the colours and brightness to suit the environment you’re in. At 218ppi, there’s little doubt this will be an excellent display. You also get the option to swap out standard glass for nano-texture, which is considered less reflective and easier on the eyes. 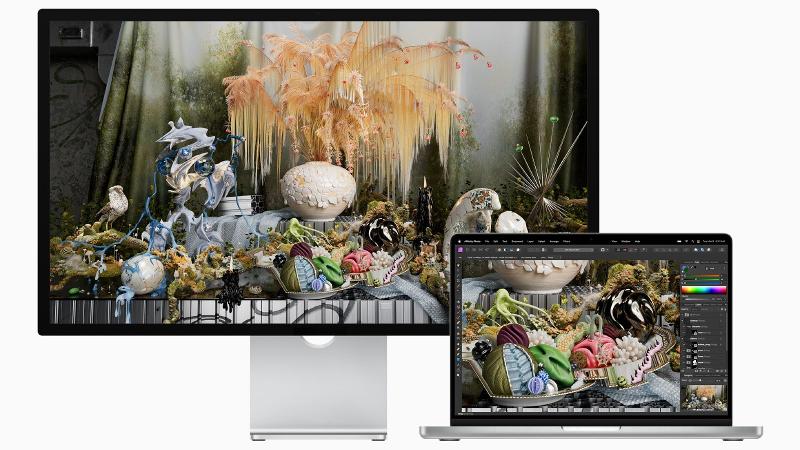 The screen is housed within some relatively slim bezels, especially when compared to the latest 21in iMac. But there’s still room for a 12Mp ultrawide camera – that’s the same one you’ll find in the iPad Air.

That means it’s compatible with Apple’s Center Stage tech, which automatically adjusts the frame during video calls to automatically keep everyone in shot. Considering the quality of the iPad Air’s front-facing camera, it should be one of the best built-in sensors on any desktop PC.

However, there’s no Face ID support, and you’ll need to buy a separate keyboard to get Touch ID. Otherwise, it’s back to entering your password manually.

All this is powered by Apple’s A13 chip, which the company released back in 2019. Most monitors don’t have a built-in processor, but you could argue most aren’t like the Studio Display. 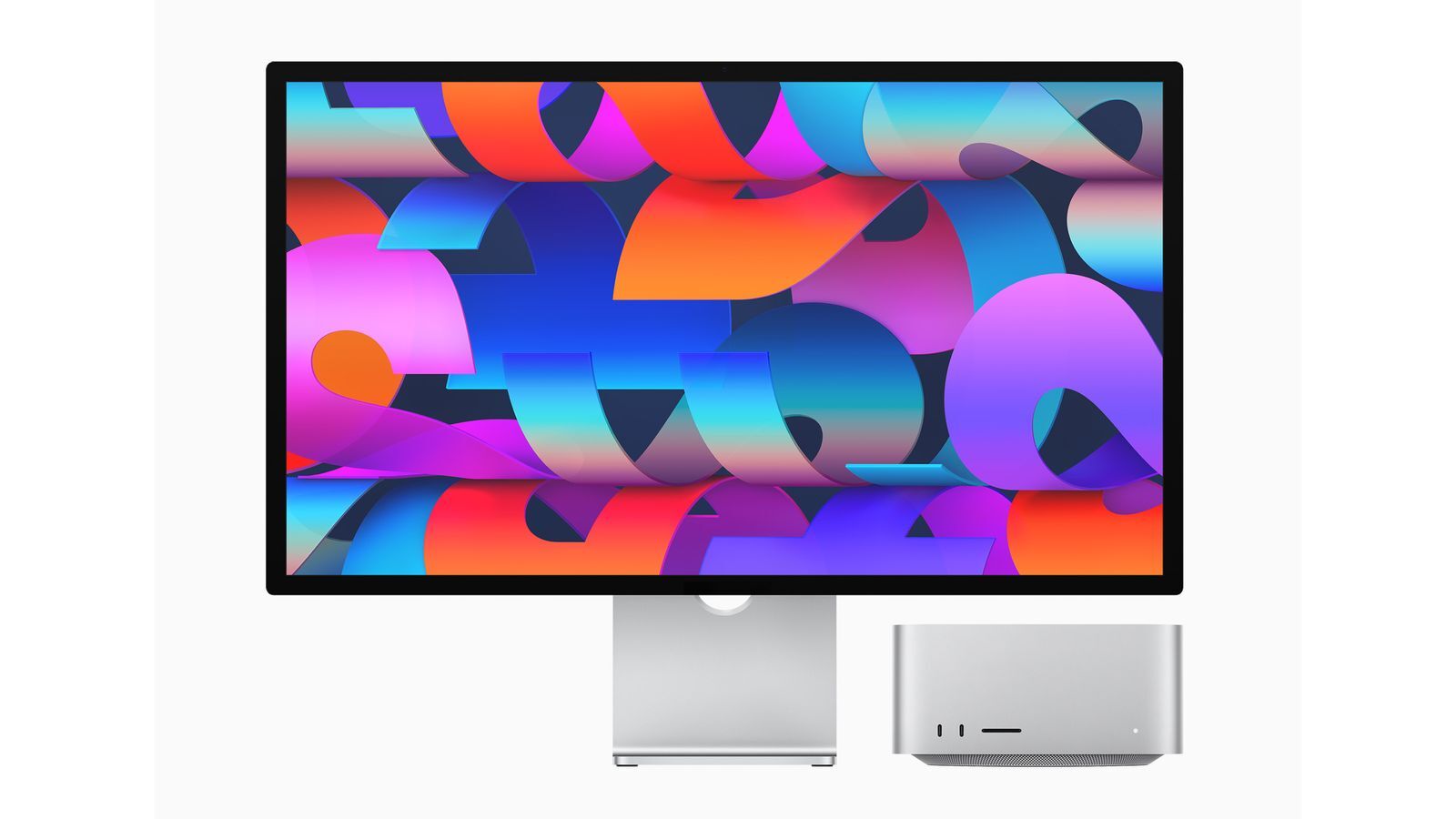 The display itself has an aluminium enclosure, which should keep it relatively lightweight. However, there are no colour options available – you’ll have to be content with the generic silver finish.

That extends to the stand, which adds additional functionality to the Studio Display. Cheaper configurations offer the ability to adjust tilt up to 30 degrees, or mount it to a wall in portrait or landscape mode for the same price. But there’s also the option to pay more for height adjustment too.

On the back of the display, you’ll find three USB-C ports, capable of data transfer up to 10Gbps. A separate Thunderbolt port is the most effective way to connect to any other displays – including the 14in MacBook Pro, which can fast charge using its 96W of power. 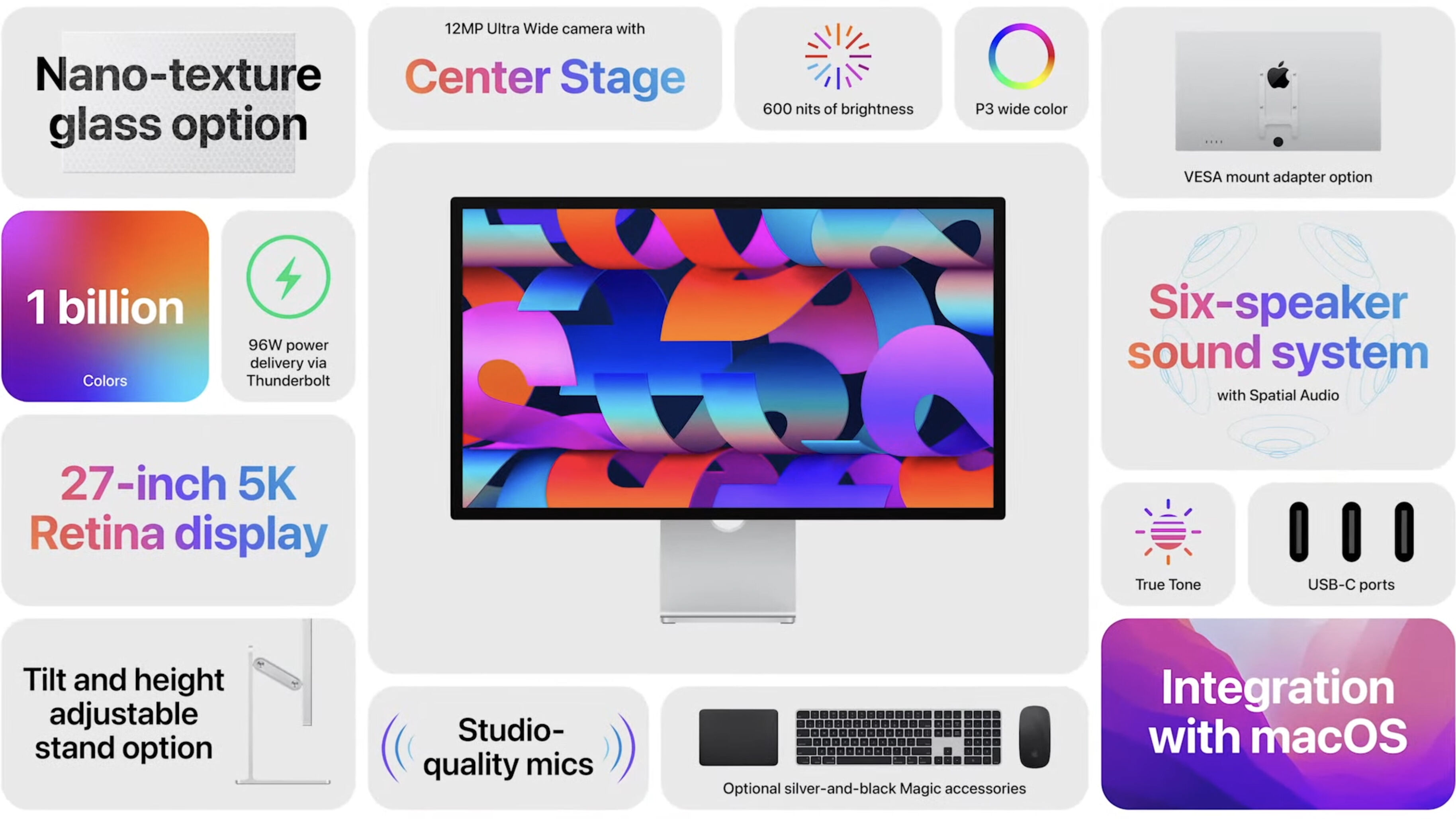 Of course, plenty more ports can be found on the Mac Studio, which is designed to be used alongside the Studio Display. It delivers high-end performance, thanks to the M1 Max chip or brand-new M1 Ultra.

We’ll update this article once the Studio Display goes on sale. In the meantime, here’s everything Apple unveiled at its Spring event. You may also be interested in our article on what’s next for the M1 Pro and M1 Max following these latest announcements.