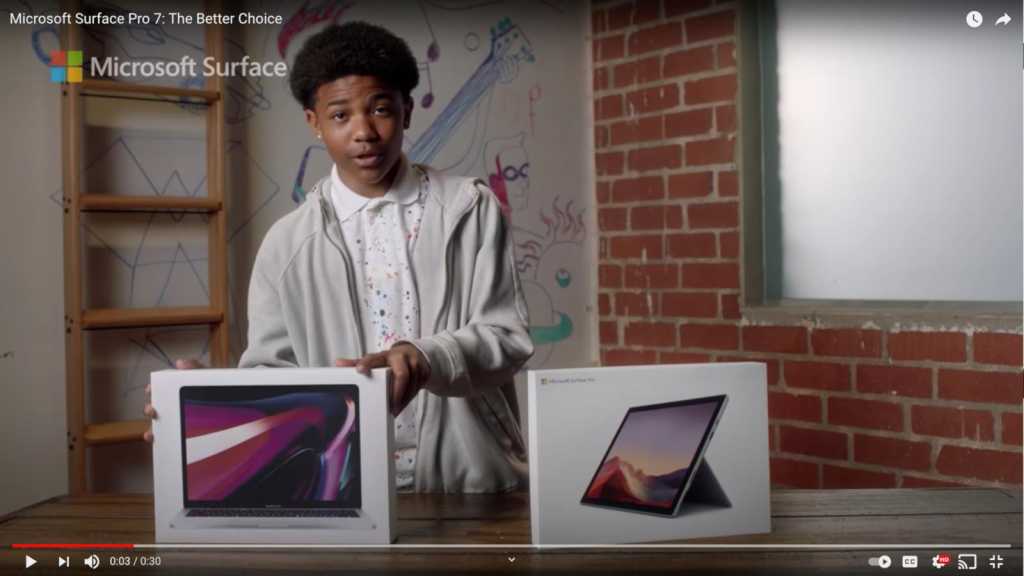 In a new advert for the Surface Pro 7, Microsoft’s 2-in-1 tablet/laptop is compared to the MacBook Pro. It probably won’t come as a big surprise to hear that Apple’s model comes off second best in the comparison.

Among other things, the presenter complains that the MacBook Pro doesn’t have a touchscreen, but only “this little bar”, which refers to the Touch Bar. This touch-responsive strip sits in place of the function keys but is indeed very narrow.

“Why can’t they just give me a whole touchscreen?” he asks.

As you can see, the ad also highlights the fact that the Surface Pro 7 is significantly cheaper than the MacBook Pro, and claims it is a “much better gaming device”. On the latter point, however, we should point out that Surface Pro 7 has in fact received harsh criticism for not being able to handle the latest games, since it only offers integrated graphics from Intel.

This isn’t of course the first time Microsoft has compared itself directly to Apple: as far back as 2014 it drew on the Mac vs PC rivalry for a Surface Pro 3 advert. And we can go still further back for the lengthy history of anti-PC adverts that Apple has run.

Incidentally, Apple is rumoured to be dropping the Touch Bar from the next generation of MacBooks. Read: Apple will correct old mistakes with new MacBook Pro models.