WWDC is one of the biggest events in Apple’s yearly calendar, second in importance only to the new iPhone reveal in the autumn. In this article, we round up everything announced at the opening keynote of WWDC 2021, from WatchOS 8 developments to macOS Monterey and everything in between.

You can rewatch the entire keynote at the top of this article.

WWDC stands for Worldwide Developers Conference. It’s an event Apple holds every year for the benefit of its developer partners – the people who create the software, apps and experiences that run on the Mac, iPhone and other Apple platforms.

WWDC lasts for a week, but on the first morning (or evening, if you’re watching from a region like the UK) Tim Cook and other Apple staff feature in a keynote presentation announcing the major software updates for the year: the new features and other changes coming in the next versions of iOS, iPadOS, macOS, watchOS and tvOS for the iPhone, iPad, Mac, Apple Watch and Apple TV, respectively.

This is obviously important information for the developers, but owners of Apple devices watch the presentation with great interest too, since many of the new features destined for Apple products launching later in the year will also grace plenty of existing devices too.

Apple has unveiled new hardware products at WWDC keynotes in the past, such as the new iMac Pro in 2017, and the new Mac Pro and a new display in 2019, however, WWDC 2021 focused strictly on software.

As disappointing as that might be for some, it does at least mean we can expect more products from the company later in the year. Mac fans will have to wait a little longer to see brand new Macs with Apple M1X or M2 processors, though.

The rest of the week of WWDC is occupied by workshops and networking events for developers, although like last year, these sections of the event are very different to the standard arrangement, namely as they’re being held entirely online.

What did Apple announce at WWDC 2021?

Apple previewed the software updates planned for the autumn at the event, giving developers and fans alike a first look at the new features coming to various Apple products later this year.

The new operating system for iPhones brings a raft of new features, tweaks to the interface and all-important security fixes.

Craig Federighi and the rest of the team walked through a variety of new features that arrive as part of iOS 15, including FaceTime Links, interactive Memories within Photos, keys and ID cards coming to Wallet, a new night mode for Apple Maps, Notifications Summary, Live Text, Focus, richer offline Siri support and more; all of which we cover in more detail across our iOS 15 news hub. 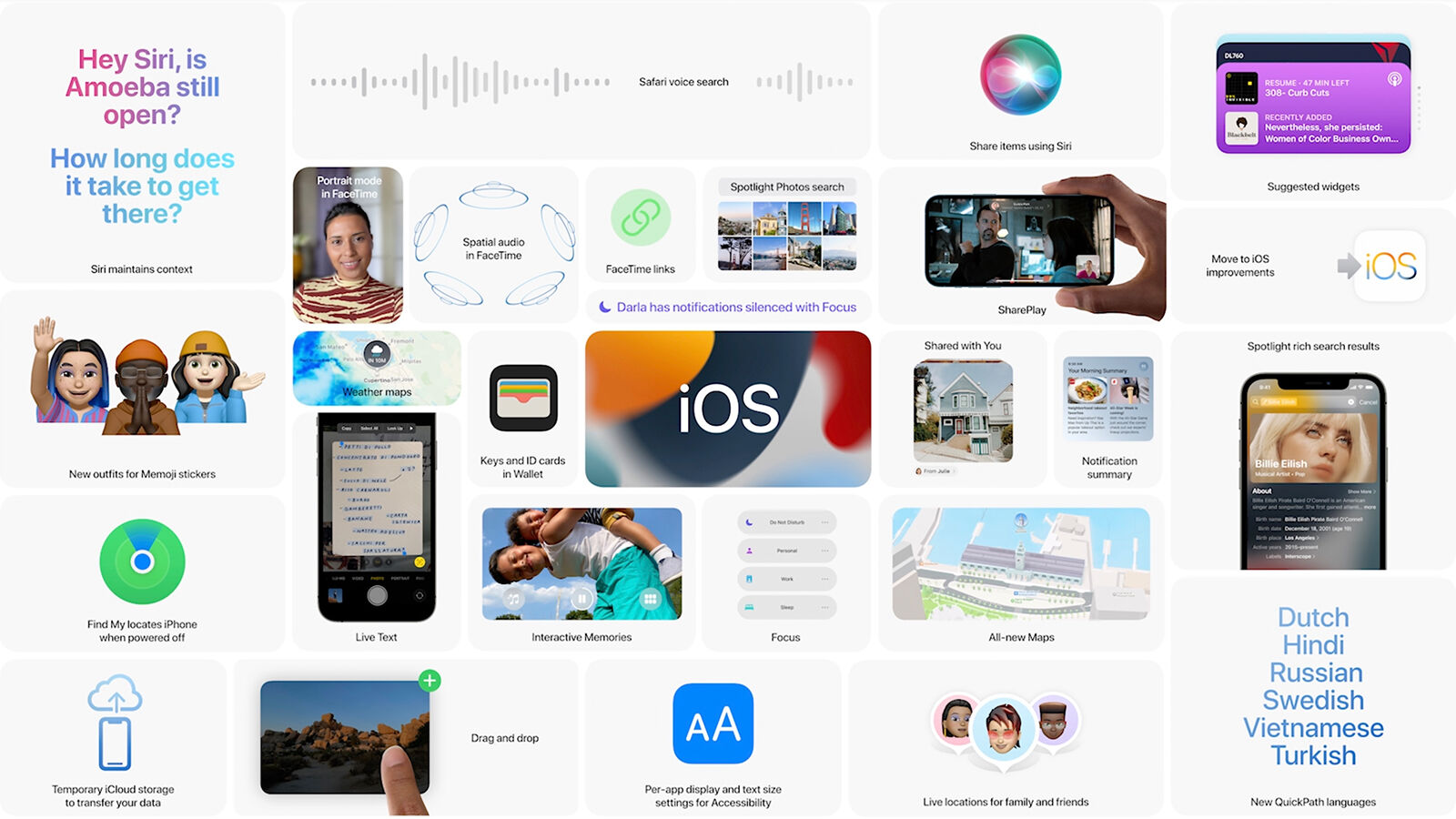 As expected, a pre-release beta was made available to developers directly after the opening WWDC keynote concluded, while the first public beta is promised for sometime in July. Curious users can gain access to the beta by following our how-to guide on the subject.

If you’ve got an iPhone 7 or later – here’s a list of compatible devices – you should be able to install the update for free when the final release appears in September.

iPadOS is in an interesting point of development – having split off from iOS relatively recently (in 2019). The two platforms still have much in common, but the changes demonstrated in the iPadOS 15 segment of the keynote were understandably geared towards defining the separate aesthetics and user experiences that better suit the small and medium-sized screen of an iPad. 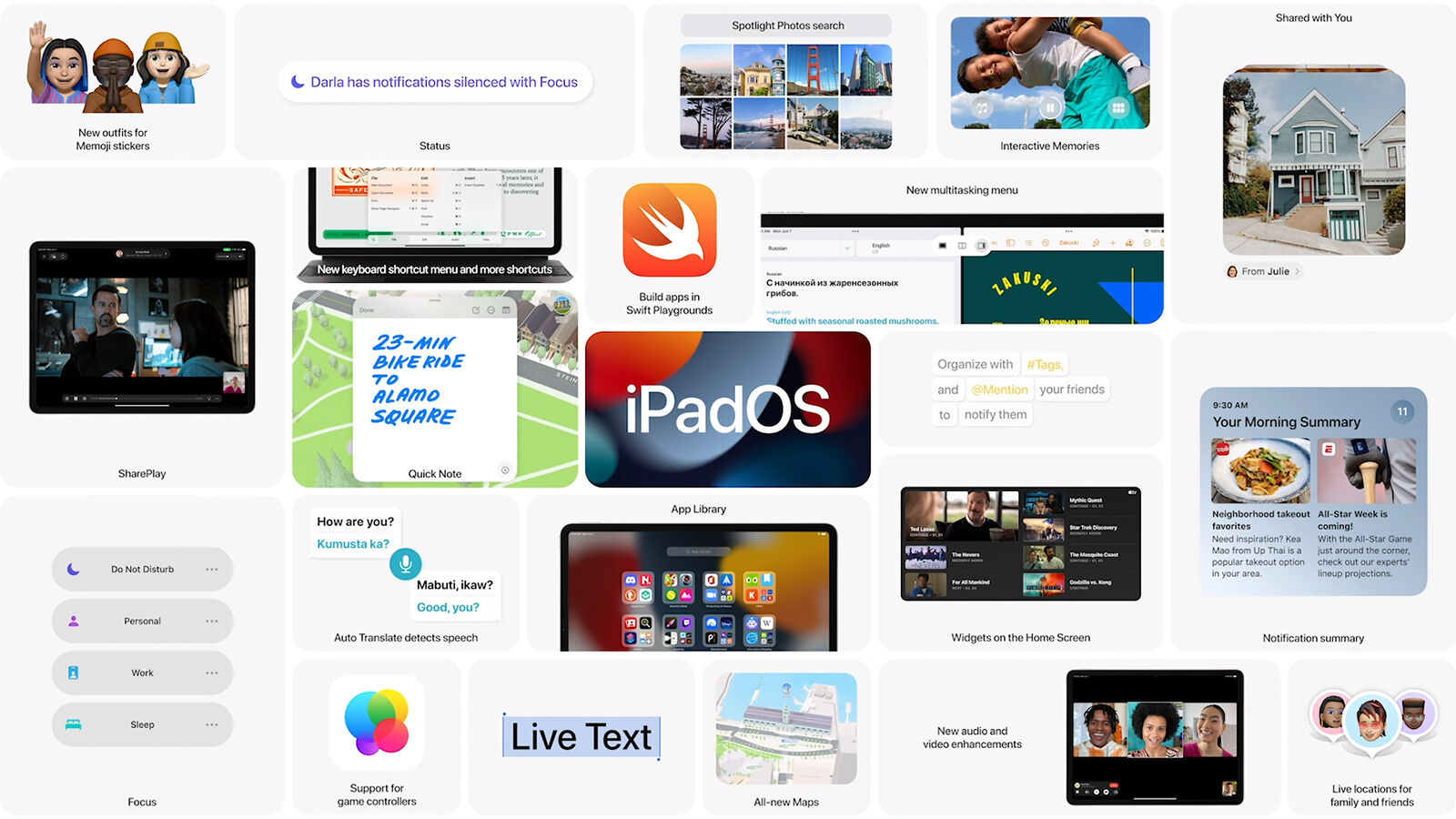 We were introduced to a new larger widget size that capitalises on the additional screen real estate of iPads, as well as new widgets for apps like Find My, Photo and Files.

App Library is now on iPad, as is a new multitasking control menu that allows for faster switching between split view and Slide Over. Quick Notes can be pulled in and flicked off from the corner of the screen practically anywhere within the OS, while Swift Playgrounds will now let users actually code apps for iPad on iPad.

It should be said that we found iPadOS 14 considerably buggier than its iOS equivalent, and it continues to be far less user-friendly; here’s hoping that as well as these new features, iPadOS 15 also placed a greater emphasis on stability.

Here’s how to update iPadOS on your iPad. We also have a run through of all the new features in iPadOS 15.

We know Apple has been testing macOS 12 since at least 11 January, so while what we were shown at WWDC wasn’t earth-shattering, some of the improvements were undeniably slick.

Despite the references previously spotted in WebKit code, Apple never formally called this build of macOS on show “macOS 12” but revealed the new name for the update as “Monterey”. 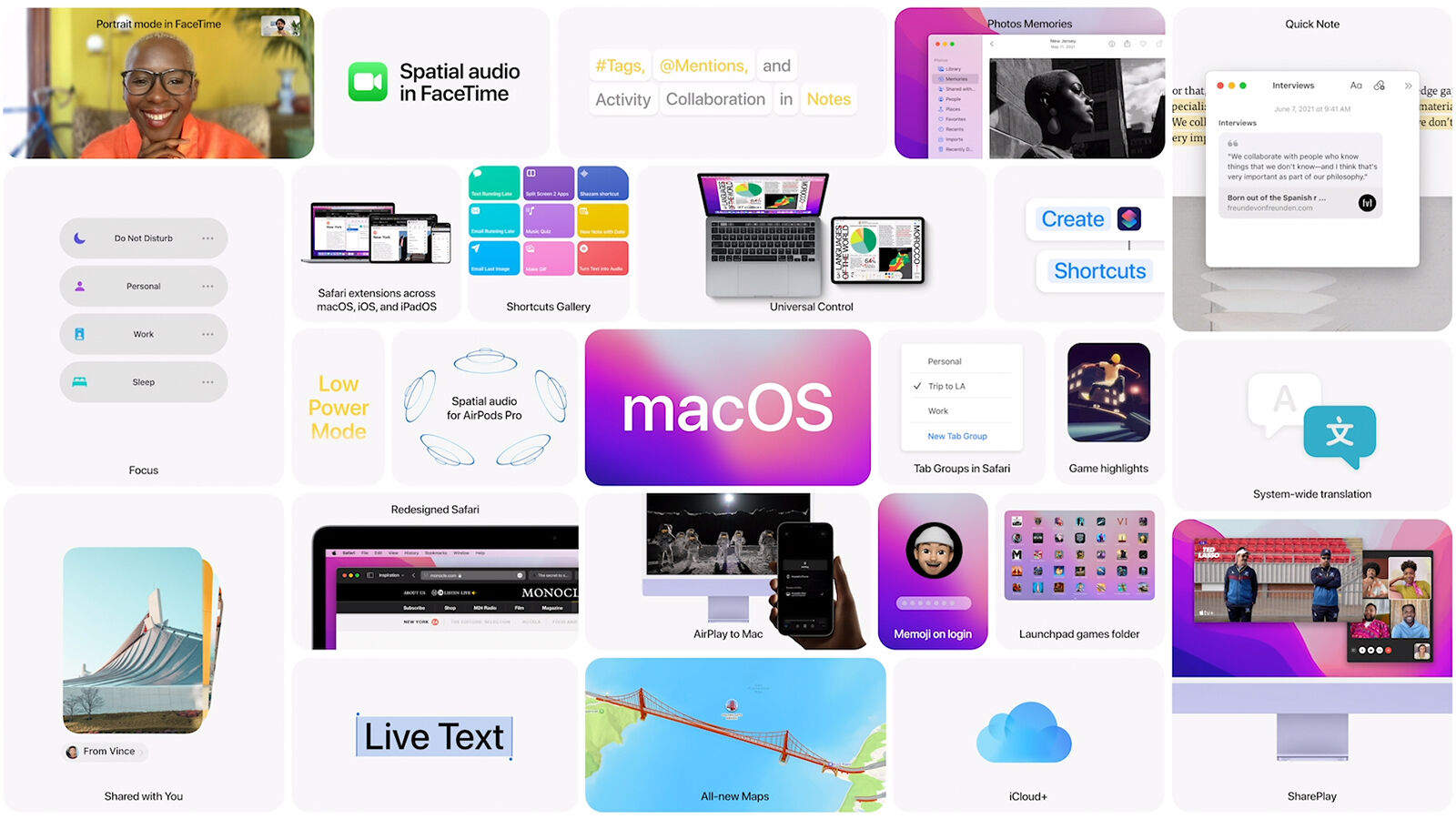 In terms of features, while we didn’t get everything we’d hoped for – like being able to customise what appears in the Control Centre, and for the arrival of the Health app on Mac – there are still a wealth of features to look forward to.

Shortcuts is coming to macOS, along with AirPlay to Mac (both audio and video), Spatial Audio support from compatible sources with AirPods Pro, a revised Safari experience with more compact and flexible tab management (and syncing across devices) and perhaps, most impressively of all, Universal Control (jump to 1:25:00 in the video at the top of this piece to see it in action).

Federighi demonstrated with seemingly effortless fluidity the ability to use a MacBook’s trackpad and keyboard to move across off the screen and onto the display of the iPad next to it, allowing for keyboard shortcuts and trackpad gestures on iPadOS instantly. Universal Control goes further, however, accommodating drag-and-drop file sharing across multiple devices in a single action.

Get the latest info in our macOS 12 news hub. Plus, here’s how to install the macOS beta.

We didn’t see the Battery and Hiking apps that 9to5Mac predicted but watchOS 8 will feature a reworked Health experience, which includes a new Mindfulness app that integrates the existing Breathe app (albeit with a new UI) with a new Reflect experience, which suggests mindful concepts to practice.

By Apple’s own admission, the Photos watch face is one of the most popular among users, so in watchOS 8 the new Portrait watch face will be able to use the depth data from portrait shots taken on iPhone/iPad and use it to dynamically insert the clock between foreground subjects and the background, creating a more cohesive overall look. 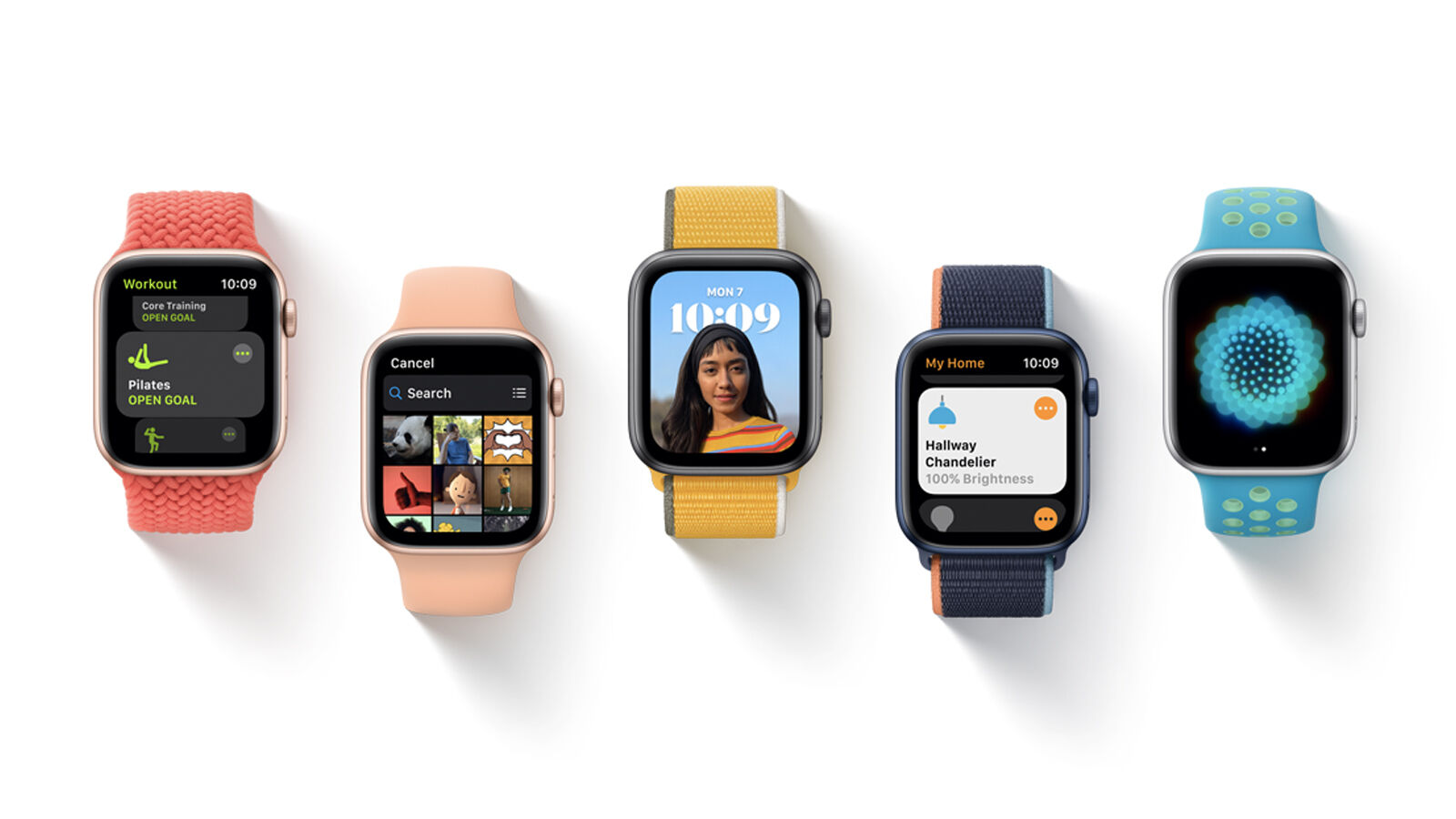 Speaking of Photos, Memories and feature photos now appear in the watchOS Photos app, and sharing along with message composition has also been made easier on-watch too.

Keep up to date with all the features coming to an Apple Watch near you with our watchOS 8 news hub.

There’s a lot of focus on the Apple TV at the moment (Apple only recently launched a new Apple TV), there are also rumours that the company may have an Apple TV that doubles up as a games console in the works. Read the rumours about Apple’s games console. 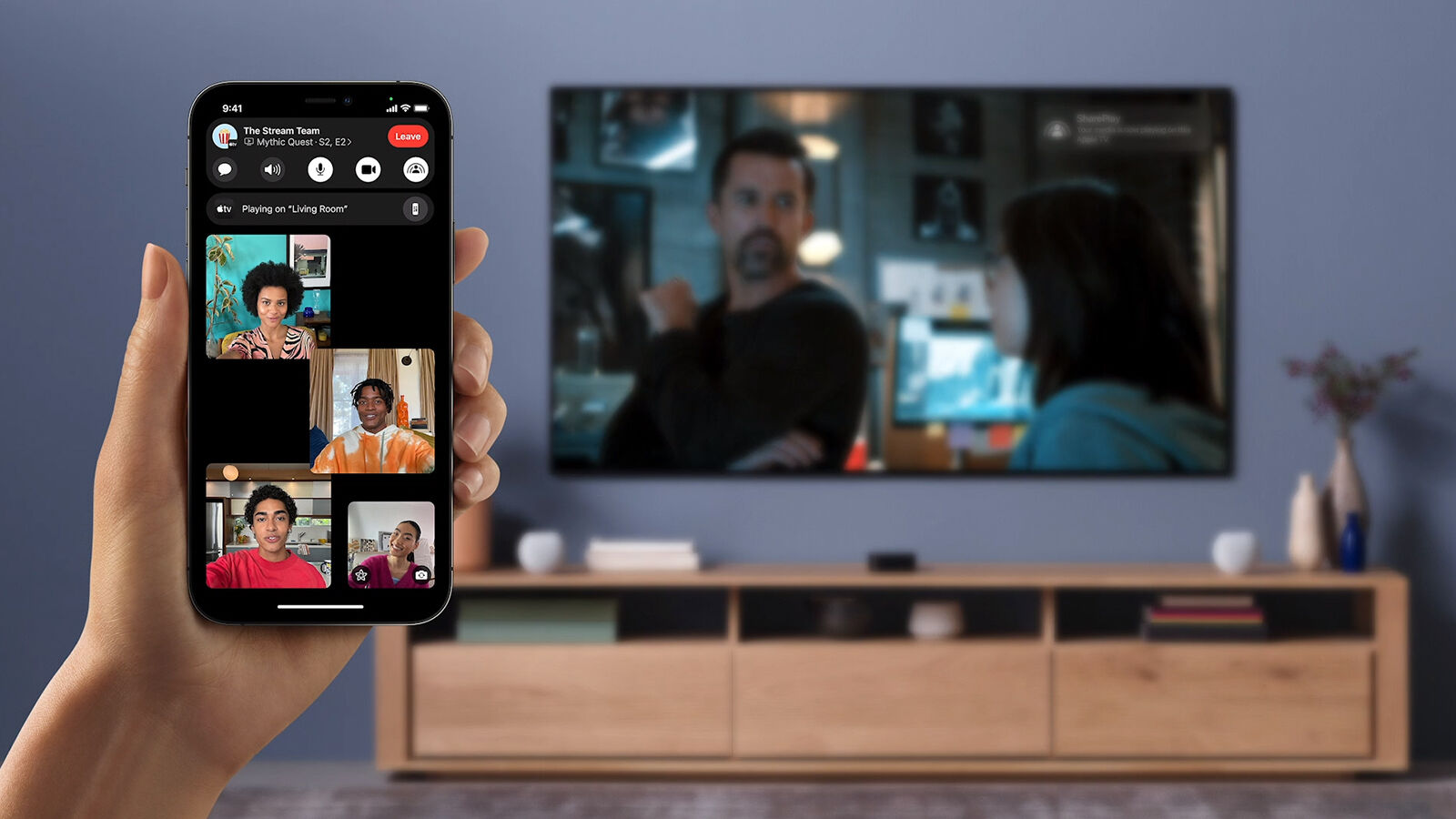 With no new hardware in sight during WWDC 2021, however, tvOS was shown in more of a supporting role throughout the keynote, gaining a raft of new features designed to complement other products and experiences within Apple’s hardware and software ecosystems.

One of the briefer talking points during the WWDC keynote concerned additional functionality coming to AirPods.

Conversation Boost will make it easier for those who are hard of hearing to follow along in real-world conversations by helping reduce background noise and amplifying speech, while AirPods Pro and AirPods Max now also work with Apple’s Find My network.

If you were hoping for new audio products, check out our feature on new AirPods too.

Less of a new service and more of a rebranding, Apple has changed the name of its paid iCloud plans to iCloud+ and with that comes a few additional perks.

Benefits include more secure encrypted browsing online, Hide my Email – with unlimited temporary email addresses to use for things like newsletters and mailing lists which automatically forward to your actual address and can be independently cancelled/deleted as you see fit. HomeKit Secure Video support allows for the addition of unlimited cameras, with stored footage not counting towards your iCloud storage allowance too.

New hardware products we were hoping for at WWDC 2021

For all the software that Apple was keen to show off during the keynote, it remained schtum on possible new hardware.

As you can read in our history of WWDC article, some of the company’s biggest products have been announced or unveiled at WWDC, such as the iPhone 3G, 3GS and 4, various iPads, the HomePod, numerous MacBook Pro and Air models, and the iMac Pro and Mac Pro. But other WWDC events, including this year’s, haven’t played host to any consumer hardware launches whatsoever. It can go either way.

With that in mind, the following products had potential to arrive during the WWDC keynote and will likely debut in the coming months, most likely alongside the next iPhone:

The 2.0GHz MacBook Pro is apparently set to get an Apple Silicon upgrade and a brand new design – it just didn’t get it at WWDC. Rumours suggest it will have a 14in display and come with the M1X Chip.

Read about the new 14in MacBook Pro here.

An update to the 16in MacBook Pro model, which launched in November 2019, is long overdue. We expect Apple to use a more powerful processor than the M1, which is being used for consumer Macs. This could be the M1X or the M2 chip. It just wasn’t an announcement for WWDC.

Read the latest information about the new 16in MacBook Pro in our news round up.

When it launched the M1 Mac mini in November 2020, Apple kept an Intel-powered Mac mini model in the lineup. However, it seems that Apple intends to update this with a more powerful Apple chip, just not yet.

The smaller iMac has just seen a big update. But what of the larger iMac?

It’s likely that the 27in iMac will get a similar redesign to the 24in model and a larger 30in or 32in display, but perhaps not for a few more months.

Read about the 32in iMac in our news round up.

WWDC could have been a good moment to discuss the next iteration of the Mac Pro, although we don’t expect this model to launch until 2022. Sadly Apple didn’t mention it at WWDC.

Nothing on the day but reports had suggested that these new earbuds will launch sometime in June, so we don’t have long to wait, regardless. More here: Beats Studio Buds spotted in wild ahead of launch.

Last but not least, let’s discuss Apple’s range of paid subscription services. Apple is working to pivot from being primarily a seller of premium hardware to being a seller of services – TV+, News+, Apple Music, Apple Arcade – to owners of that hardware, and it would have made sense for the launch of any new services to happen at WWDC, however, the only change to a subscription serivce was iCloud+ mentioned above.

The analyst who predicted that has also argued that Apple will launch a raft of new Plus services including Stocks+, Mail+, Maps+ and Health+. These are all plausible additions to the portfolio. Such services would also, of course, make it easier to shift subscriptions to Apple One.

And that’s it for WWDC 2021. More info about Apple’s upcoming plans can be found in our guide to New Apple products coming in 2021.

If you’d rather make savings on the products available right now, visit our roundup of the best Apple deals.