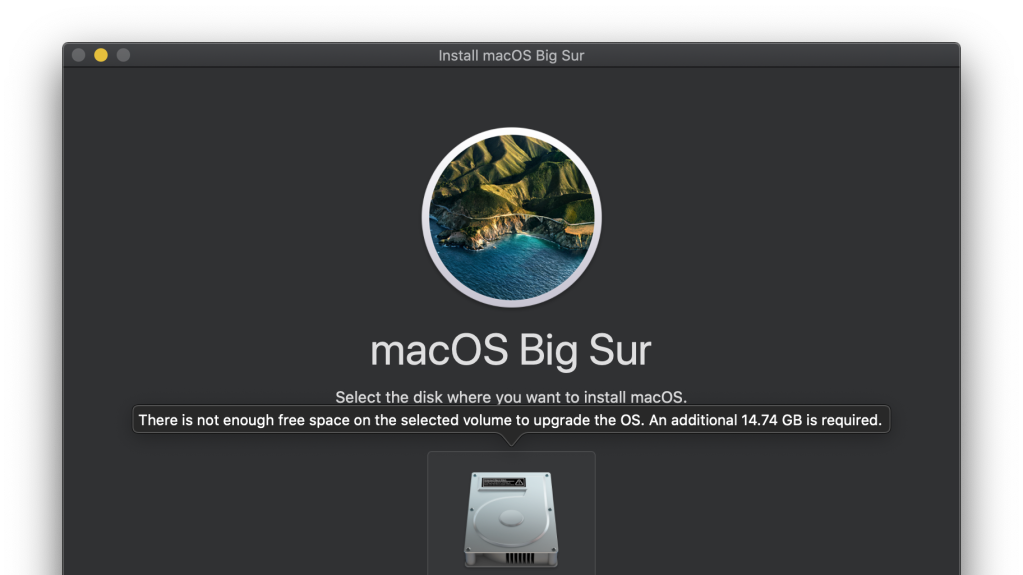 When it was released on 9 February Big Sur 11.2.1 fixed a problem where 2016 and 2017 MacBook Pro models were failing to charge past 1%. It also provided some important security patches. However, an installation issue that has been ongoing since November was not addressed.

The new version of the update addresses this issue where the installer would fail to check how much space was available before installing the operating system update. As a result the installation would start, but would be unable to complete, filling the Mac’s storage in the process and making the Mac unusable.

Since the original macOS Big Sur installation requires at least 48.5GB free space (35.5GB and another 13GB for the installer) lack of space is quite a common problem. We encountered a similar issue when installing Big Sur but luckily for us we saw the message indicating that we didn’t have enough space available.

Users who found their drive ran out of storage capacity during the update found their Mac was stuck and unable to finish the installation. Their only only option was to perform a clean install – wiping their Mac and reinstalling Big Sur. Hopefully for them they had a back up, because if not they faced losing their data.

Mr Macinitosh raised awareness of this issue back in November. He has now confirmed that the new update fixes this installation error.

macOS Big Sur 11.2.1 (20D75) full installer is now available for download. I’ve confirmed the new installer now checks for free space properly. This was a serious problem, and I’m glad users will no longer get caught by this issue. https://t.co/dYSuRjdd4p pic.twitter.com/ILxoKfhORn

It seems that this issue became more widespread in Big Sur 11.2, but it’s suggested that it existed in earlier versions of Big Sur as well.

Other problems with Big Sur 11.2

This is merely the latest issue to be associated with Big Sur 11.2. In addition people have complained about issues with external displays, a problem with bootable backups no longer working, and the MacBook Pro charging issue. The Big Sur 11.2.1 update also addressed a serious security issue.

Just over a week later Apple updated Big Sur again – macOS Big Sur 11.2.2 focused on bug and security fixes including a serious bug with third-party accessories that in the worst cases could damage newer models of MacBook Pro and MacBook Air.