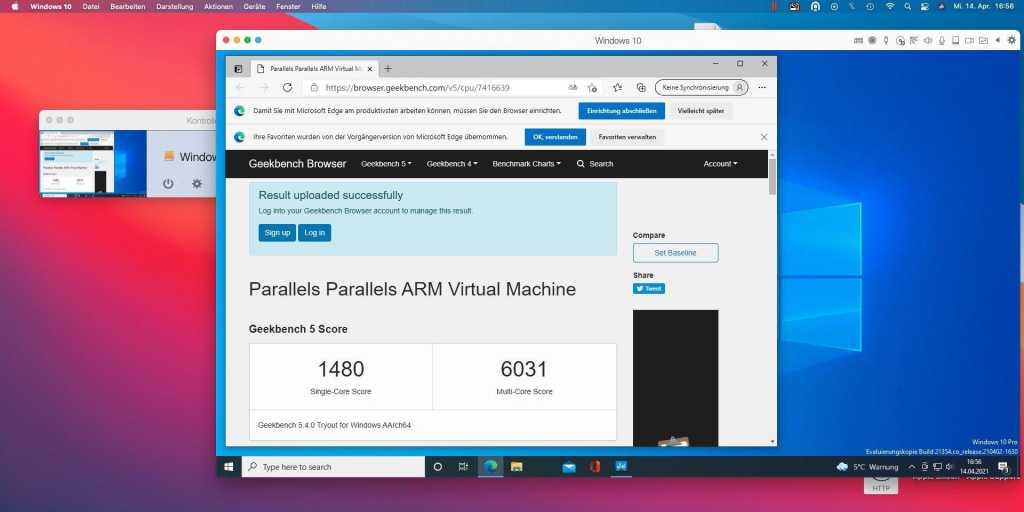 Parallels has released the first version of Parallels Desktop that supports M1 Macs opening up the possibilities for using virtual machines on Apple Silicon Macs.

According to Parallels, Windows 10 on an M1 Mac can be 30 percent more powerful than a virtual system on a MacBook Pro with an Intel Core i9 CPU. The catch: the Intel MacBook runs the standard version of Windows (x86), while the M1 only supports an ARM version of Windows – Windows 10 for ARM – which is not publicly available. This is because only ARM-based operating systems can be used on the new Macs due to the new processor architecture of Apple silicon.

Further complicating this, you cannot actually buy this version of Windows, but you can download it free of charge as a so-called Microsoft Insider.

Parallels provides information detailing the installation process. in principle, all you need is a Microsoft account and a free registration for the Insider program. This should be no problem for private users – activation is also possible with a valid serial number. Businesses may need to look at the terms of use. Read: How to install Windows on Mac.

The system should also be well suited for games; according to tests, an M1 Mac should achieve 60 percent better DirectX11 performance than a MacBook Pro with Radeon Pro 555X. According to Parallels, games like Rocket League, Among Us, Roblox, The Elder Scrolls V: Skyrim, Sam & Max Save the World should run.

Our own tests indicate that there will be significant benefits from the new Apple processors – when we tested the M1s performance with the Geekbench benchmark tool we saw some impressive scores compared to Intel-based Macs. Our Macwelt colleagues shared their Geekbench 5 results they saw on an M1 Mac mini:

Unfortunately, Windows 10 for ARM has some limitations in practice compared to a standard Intel Windows, including issues with program compatibility. Similar to Rosetta under macOS, the ARM version of Windows has to translate many apps before they can run on the architecture, and not all Windows apps are supported. As a result of this starting an app for the first time can take a long time or sometimes fails for unknown reasons. With the Windows version of iTunes we had to wait several minutes for the program to start.

We have tested the best virtual machine software for Mac in our round up for 2021. You may also be interested to find out how you can run Windows on a Mac for free.

We have a list of the apps that run on M1 Macs.

Adapted from a Macwelt report.