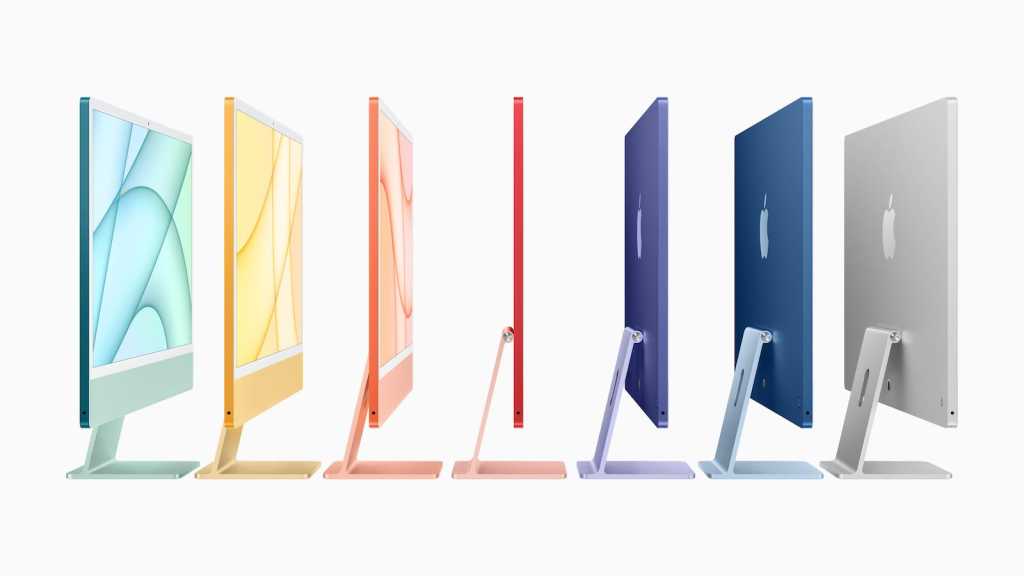 Since it was introduced in 1998 the iMac has transitioned through a number of different designs. It started as a see-through CRT before it transitioned, briefly, to the angle-poise lamp styling of 2002. It then progressed into the ‘picture frame with chin’ look we’ve had since 2004. That latter look has evolved from white plastic to aluminium and it’s got slimmer over the years, but it hasn’t changed a great deal since 2007 – until now that is.

These new 24in iMacs bring colour back to the iMac for the first time since 2002. There are seven colours to choose from including blue, green, pink, silver, yellow, orange and purple. In each case the colour on the back of the display is darker than that on the front. So in the case of purple it’s a dark purple on the back and a lavender shade on the front. The colour is replicated on the sides of the iMac as well as on the mouse and keyboard, and even the power cable.

There is no doubt that the decision about whether to buy one of these new iMacs will be a matter of taste: you either like the new look or you hate it. I have to admit to being slightly on the fence in as much as I really want to love the new iMacs, but I feel that Apple’s made some huge mistakes with this design.

The colours are too pretty

It’s not as if Apple hasn’t made colourful iMacs in the past, so we have to credit the company with knowing whether there is a market for brightly coloured computers.

However, rather than having a colour to suit everyone, the color palette Apple has settled on seems a bit, I hate to say it, a bit girly (as a woman I feel like I can say that). One colleague complained that the colour on the rear is replaced by a paler version on the front – they lamented the fact that Apple didn’t carry the same shade of red to the front of the pink Mac. 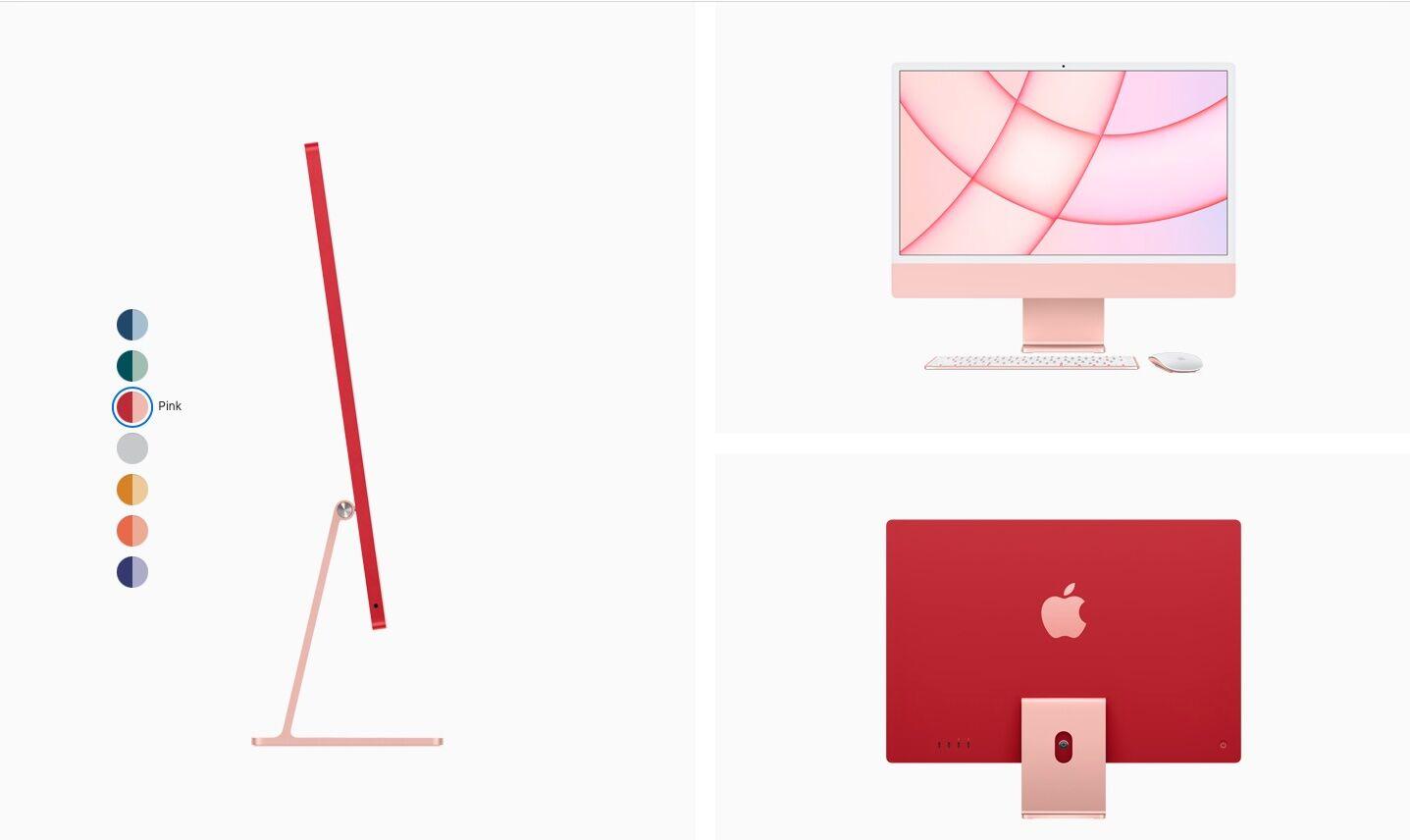 Others have said they can’t wait to buy a one of the colourful iMacs. There will no doubt be people who love these colour options, I just wonder if there will be many more who won’t buy a 24in iMac because Apple has limited the market for these new iMacs too much with these light, pastel shades.

Or has the company cottoned on to the fact that right now people forced to work from home for the past year are looking for a computer to fit in with their home decor? Perhaps the time is ripe for a beautiful piece of tech that blends into the home and doesn’t shout computer at you – just as was the case with the original iMac. 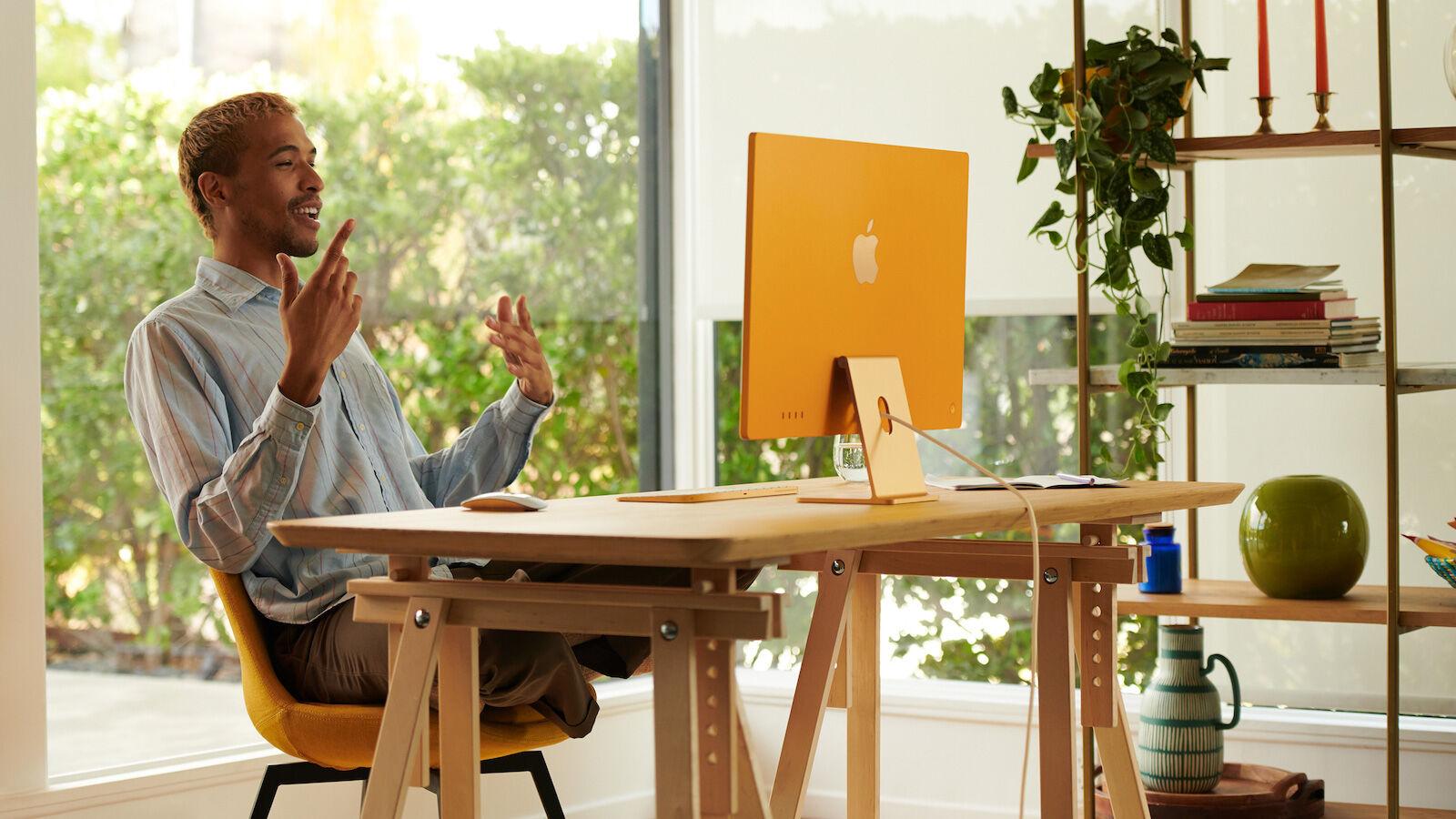 For those who don’t like the colour options there is always the silver finish. Perhaps we will see a darker colour scheme on the larger screen iMacs when they launch.

The white border is too noticeable

You will either think the white border around the edge contrasts nicely with the iMacs ‘chin’ below the screen, or you will wish the new iMac had a black border. We have to admit to being in the latter camp.

It seems to be a strange decision for Apple to go with white borders after talking about how the 4.5K Retina display is so well suited to watching movies and editing images. 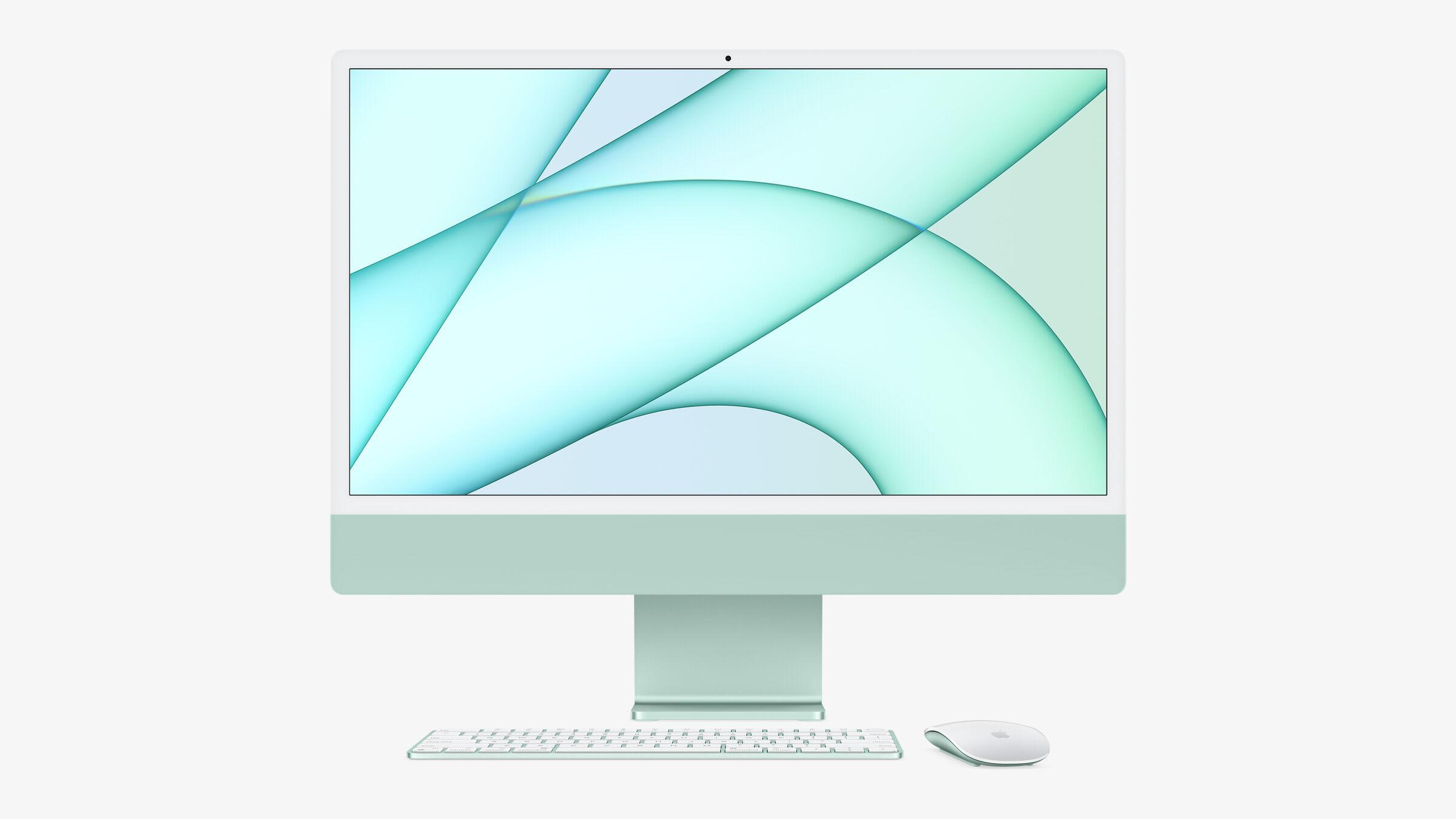 In this context it is interesting to note that the iPad Air and iPad Pro only come with black edges, while the iPad and iPad mini do have white edged options. We aren’t sure about Apple’s logic here. It seems likely that the black border was made necessary when Apple introduced the all-screen design of the iPads Pro and Air. But it may be that Apple recognised that a black border is preferable on a device you might use for viewing photos or watching movies.

Possibly Apple believes the kind of people using the 24in iMac will be working in apps with white backgrounds such as spreadsheets or word processors? This theory may be proven if, when Apple updates the larger iMac, we see black borders. We believe black borders are much better suited to creative pros. We really hope to see black borders on the successor to the 27in iMac.

If the new iMac design is not to your liking you could look for a deal on one of the now discontinued 21.5in iMacs here: Best iMac deals. Alternatively the 27in iMac might suit you better. The old iMac design, which you can see in the image below, featured black borders and a silver ‘chin’ with a black Apple logo, speaking of which… 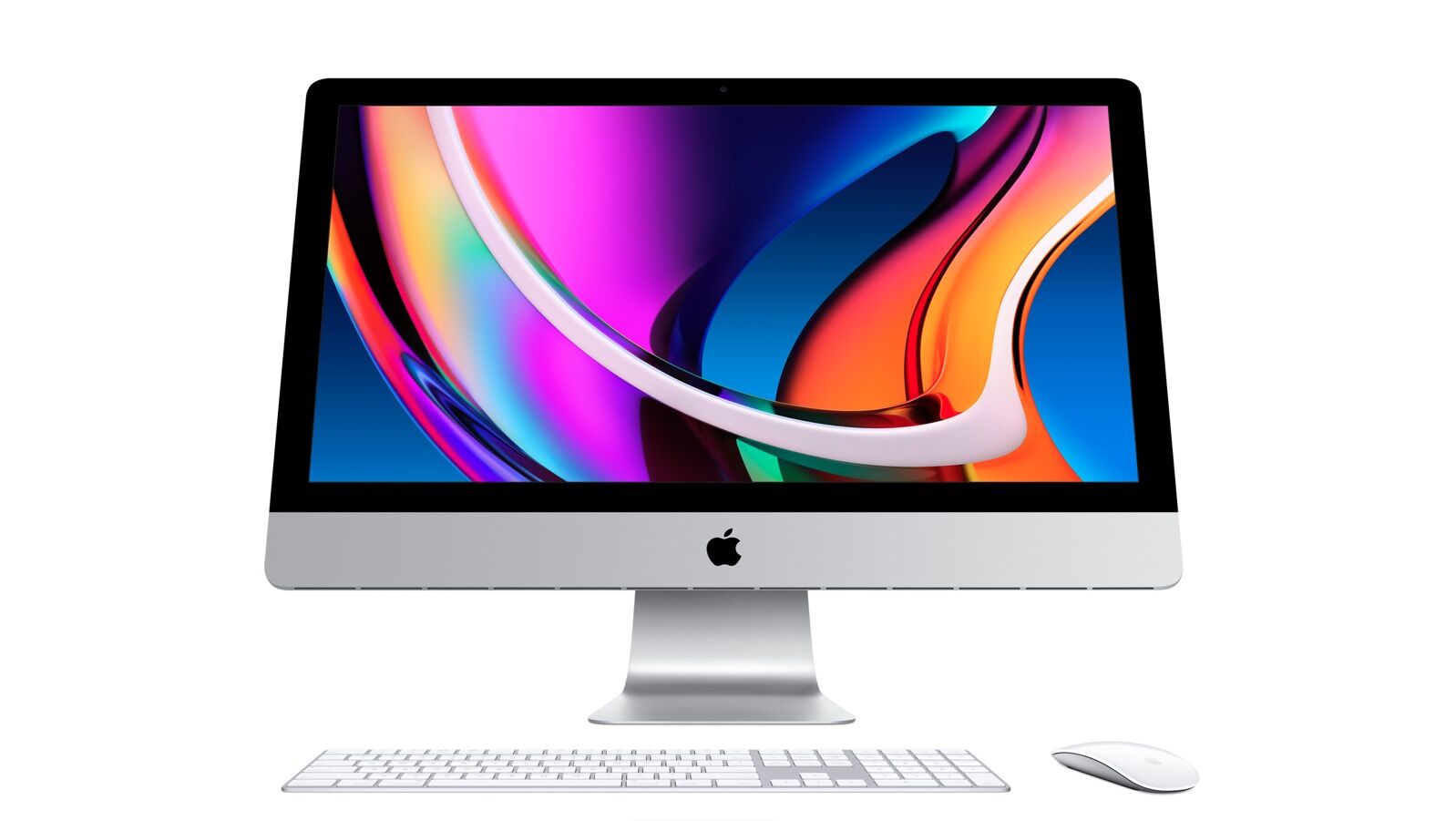 Missing from the front of the 24in iMac is the Apple logo that used to sit in the middle of the so-called ‘chin’ below the screen. While the design is still recognisable as an iMac, it is possible that the lack of Apple logo could stop people recognising that this is a iMac (and Mac users tend to want people to know they are Mac users).

There is, at least, an Apple logo hidden away on the back of the screen though. Apple seems to think people will have a view of the back of your iMac, but that’s surely only the case in office receptions and, well let’s face it, there aren’t many of them open right now.

It’s not any more ergonomic

I’ve been calling for Apple to redesign the iMac for some time. Read: Why the iMac needs a redesign. One of my main complaints about that design was based on frustrations that the screen wasn’t very ergonomic.

I used to have my iMac in the office positioned on top of a bundle of books in order to raise it to eye level and I don’t think that was an unusual set up. Unfortunately it doesn’t look like Apple has gone to great lengths to address this problem with the new iMac.

It’s not really 24in

What Apple has solved with the redesign of the new iMac is a larger screen in a similarly sized case. By reducing the bezels the company has been able to squeeze in a slightly larger screen.

Apple’s describing this new screen as 24in. Screen size is always measured diagonally in inches. I was more than disappointed to learn that the so-called 24in display is actually not 24in at all. The company admits in the footnotes that it is 23.5in measured diagonally.

This would be forgivable if it wasn’t for the fact that the older iMac was 21.5in diagonally and Apple didn’t call that the 22in iMac. I’m not sure why Apple is lying this time around and I feel cheated by Apple on this point.

These are all completely subjective points. I’m hopeful that the design of the new iMac will grown on me and the iMac will end up selling well and prove that Apple does know what it is doing in terms of design now that Jony Ive has gone.