Apple has offered its clearest signal yet that it’s about to launch a high-res audio streaming service: a mysterious teaser advert that says “music is about to change forever” on the Browse tab of the Music app.

(Update: Apple has since announced upgrades to its streaming service, including lossless audio, Spatial Audio and Dolby Atmos.)

That’s about it as far as information goes. The enigmatic phrase is accompanied by a small label saying COMING SOON, and a large but plain image showing the Apple Music logo. 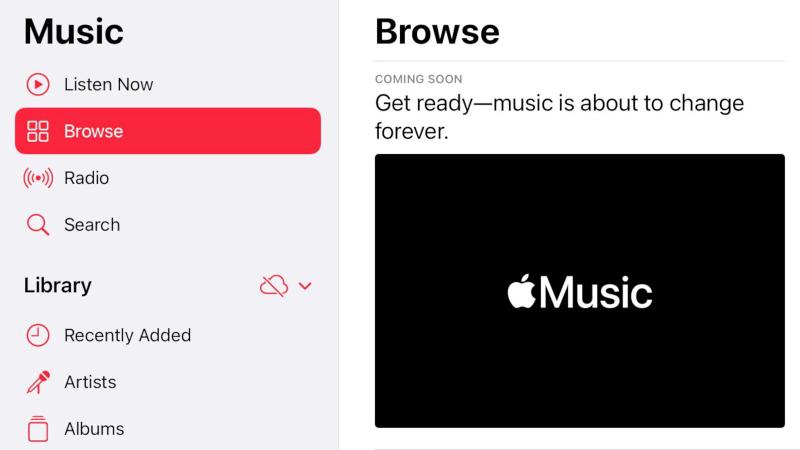 Tapping on this makes a little video play, but it’s just an animated version of the same logo. This video is labelled “Tune-In Video”, which feels like a bit of marketing industry jargon that shouldn’t have been made visible to consumers. It’s likely to be a placeholder that will be replaced with an advert for the new service when it’s officially announced.

Apple has been expected to upgrade the quality of its audio streaming for some time, but rumours clarified near the start of May when a beta of iOS 14.6 was found to include references to Hi-Fi audio. The new service is expected to offer high-quality lossless audio that should sound even better than an original CD.

Hmm look at what I found in the Apple Music website…. pic.twitter.com/Lb4HbQ6Nww

It’s unclear at this point if Apple will upgrade its entire service, add an additional high-res tier at a higher price, or upgrade the standard service and introduce a lower-price or even free tier at the current resolution.

A high-res version of Apple’s audio streaming service may be of limited interest to the wider public – my US colleague Jason Cross has controversially argued that nobody needs HiFi Apple Music+ – but many more people will be excited by the prospect of new AirPods, which one rumour has claimed will be announced at the same time on Tuesday night.