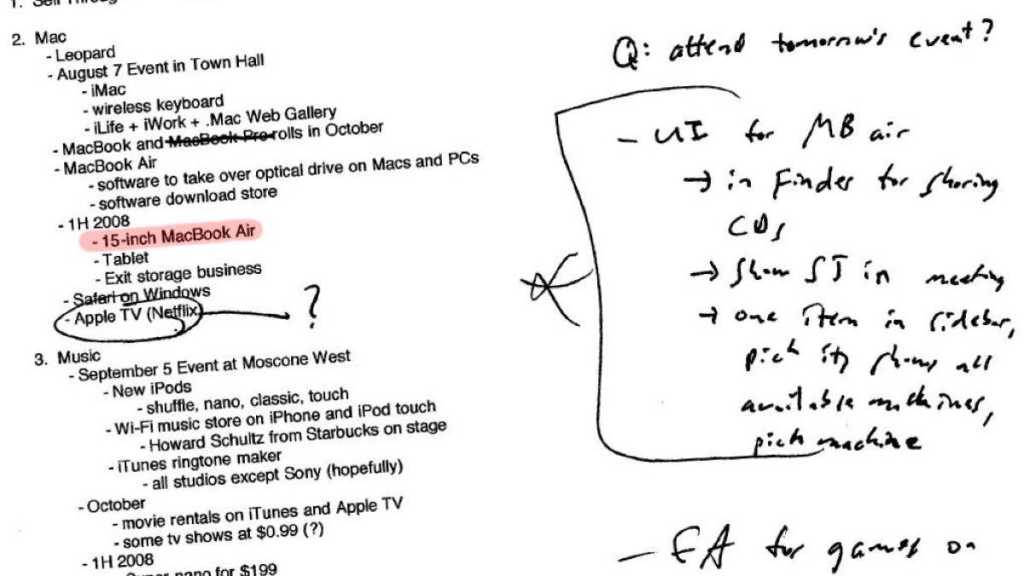 The lawsuit between Apple and Epic has proven to be a goldmine for those curious about how Apple works internally and how its top executives plan upcoming products and services.

Twitter account Internal Tech Emails has revealed several old emails that emerged as part of the openly available evidence in the ongoing trial. Perhaps most interesting is a meeting agenda with handwritten notes from Steve Jobs, sent to the rest of the management team back in August 2007.

Funny enough, he wrote “fake Steve Jobs” at the top of the page, a reference to a popular anonymous blog that was later revealed as journalist Daniel Lyons.

Interestingly, the agenda mentions a “15-inch MacBook Air”. The MacBook Air had not been released at the time, and a 15-inch model has never made an appearance. The first model with a 13-inch screen was launched in early 2008, and the 11-inch model hasn’t received much TLC since the third generation launch in 2018.

Another point is “open up software (EA games, others)?” and Steve Jobs has also commented on it in the margin, for “iPhone and N45” – the latter was the code name of the iPod Touch prior to launch.

Another email from 2015 from App Store boss Philip Shoemaker outlines how Google is better at automating the app review process, and saves much time compared to Apple’s much more manual process.

While the 15in MacBook Air never made an appearance, the ultralight laptop is rumoured to be upgraded soon. We cover the latest new MacBook Air (2021) news separately for those interested.