The latest version of iOS hits iPhones around the world today. What new features does it bring, and how can you update your iPhone from iOS 14 to iOS 15?

At its WWDC event back in June, Apple pulled back the covers on iOS 15, the latest version of its iPhone operating system. In this article we take a look at the new features you’ll be getting when you update, and how it compares to the iOS 14 software that it replaces.

iOS 15 will become available for public download at around 6pm BST UK time today (20 September 2021). That translates into a time of around 10am PDT and 1am EDT US time.

Bear in mind that iOS rollouts are a little unpredictable, and it may not be ready bang on the time given above. Indeed, Apple’s servers will be busiest on the first day of launch, and it may be worth waiting a day or two to let things settle down (and for any major bugs to be reported and publicised or fixed).

Which iPhones can run iOS 15?

Of course, before you decide to move up to the new version of the software, you’ll want to confirm that your device is actually compatible.

Apple confirms that iOS 15 works with the iPhone 6s or later, which means that all the iPhones that currently run iOS 14 – plus the new iPhone 13 models, which will have iOS 15 preinstalled – will be able to upgrade to the new version. Fine work there, Apple.

We explain which iPhones can get iOS 15 in more depth in a separate article.

iOS 14 introduced some significant upgrades to the iPhone interface, including widgets, the App Library, and shrinking Siri down to a little globe rather than taking over the whole screen when you want to ask it a question.

Apple has kept things pretty much the same with iOS 15, instead focusing on new features for its core apps, including FaceTime, Apple Music, Photos, Maps and Safari.

The bulk of the improvements in iOS 15 come in the updates to many of Apple’s own apps. There are also some new features that work across multiple apps, such as Shared With You and Focus, which should make life much easier when the new version arrives later this year. For now, here’s what you can look forward to.

A totally new feature is Focus. This gives you the power to reduce the distractions that come with having a supercomputer in your pocket. These can range from a simple, universal Do Not Disturb mode to bespoke ones like Personal, that cuts out all work-related messages and emails for specific periods of the day. The same is true if you need to focus on an intensive work task and don’t want to be slowed down by Facebook or Twitter. 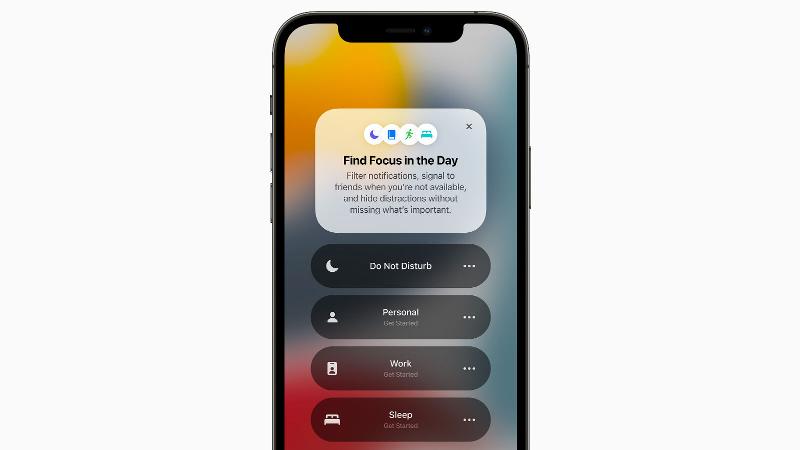 There’s even the ability to set up Focus modes that display certain widgets on your Home screen whenever the mode is in use. With this, you can create a different look and access to the tools you need, whatever you’re up to.

Focus works across your iPhone and other Apple devices, interacting with Messages, FaceTime and other apps to ensure that you have the headspace you need to get things done or relax.

Another area that changes is Notifications. First up, there are now contact photos for people that send you messages, and app icons have been enlarged so you can easily tell at a glance where the notification is coming from.

iOS 15 also sorts notifications into different priorities, meaning you immediately get any sent from humans, but apps that you don’t use often will be held back and presented in a Notification Summary when you have more time to deal with them.

You’ll also have the ability to quickly mute app alerts or message threads for an hour, so you can go to a meeting or have your lunch without being interrupted.

Apple introduces its new Live Text feature with iOS 15, which gives your iPhone the smarts to be able to recognise text, numbers or objects in images, then turn them into usable items. While the biggest application of this feature comes in the Camera app, as we’ll see below, one useful addition is that you can search for terms in Spotlight and it will employ the technology to find what you’re after. This could include a telephone number in a photograph or that guitar you took a picture of when at the music shop. Clever stuff. 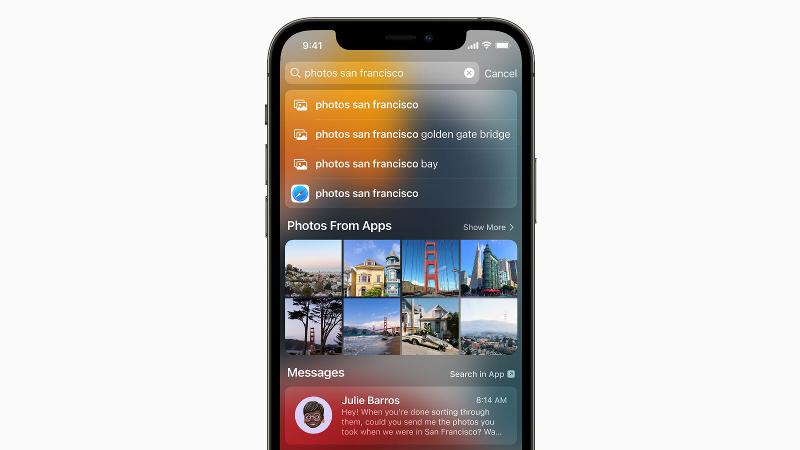 With apps like Zoom taking centre stage in the COVID era, it was only a matter of time before Apple beefed up FaceTime to make it more attractive for users.

One way things are instantly improved is that you can now chat with friends who use Android and Windows devices. Thanks to the web version of FaceTime, they can use the link you send them to access the portal (much like Zoom) and attend your meetings or video calls. These are still protected by end-to-end encryption, so your privacy is assured.

Scheduling has also been introduced, so you can invite people to a call well in advance, making it much easier to arrange a conference or family get-together.

Apple has improved the sound on FaceTime calls too, with new Spatial Audio meaning the voices of people come from where they are positioned on the screen, which will be especially useful thanks to the new grid layout for group FaceTime calls. You can also get rid of unwanted background noise on your microphone thanks to the new modes.

Portrait mode is a new feature, allowing you to blur the backgrounds of your environment, which will be perfect if you haven’t had time to tidy up before the important work call. 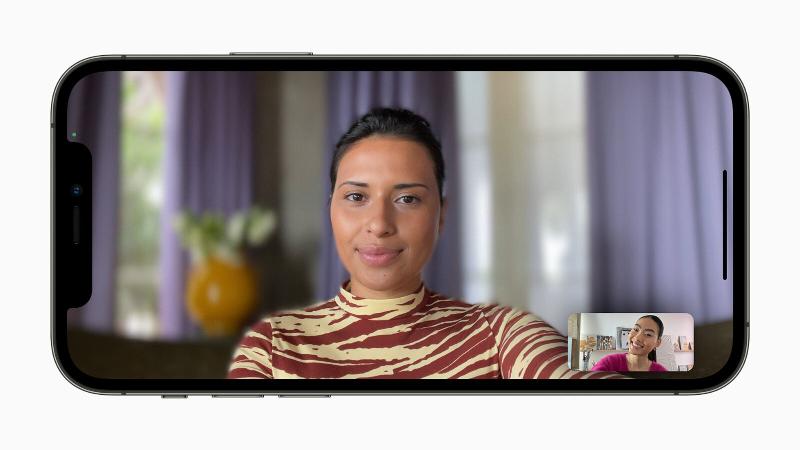 While on a FaceTime call, you can now share songs from Apple Music or watch movies and TV shows with everyone being able to see and hear the content. This feature also extends to sharing your screen, making FaceTime now a proper rival for Zoom or Microsoft Teams as you can host presentations rather than just the standard video chats available on iOS 14. 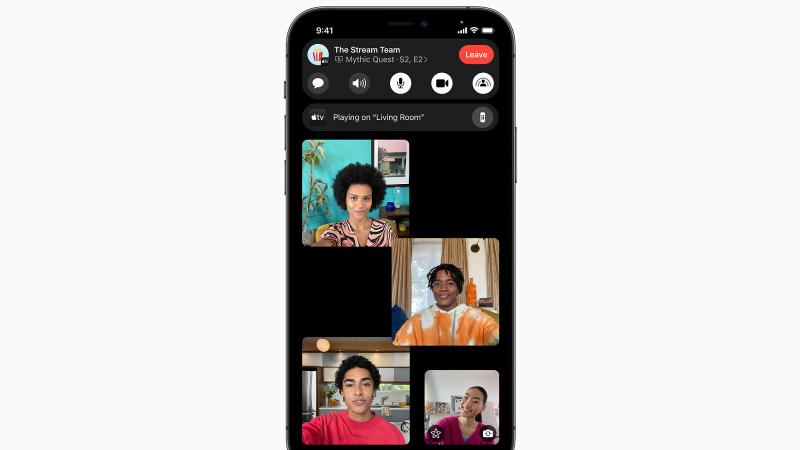 Another area of improvement over iOS 14 is in Messages. The new Shared With You feature means that when people send you links to music, articles on the web, podcasts or photos from a trip you’ve taken together, these will automatically be stored in the new Shared With You section that appears in Apple Music, Podcasts, Photos, Safari and Apple News, depending on which is the most relevant.

This means you won’t have to go looking though old message threads to find that track that your mate said you should listen to. Instead, open Apple Music, look in the Shared With You folder, and the track will be there, accompanied with a note indicating who sent it to you.

As part of iOS’s new Focus mode, you can also turn on a Do Not Disturb setting for Messages that shows anyone writing to you that you are not available at that time.

Live Text and Visual Look Up

In iOS 15, when you open the Camera app you’ll have new tools available. Live Text will enable you to capture any text or numbers in the frame and interact with them. For example, if you’re at a coffee shop and want to use the free Wi-Fi, point the camera at the sign that tells you the password, then Live Text will copy the text so you can paste it in rather than having to type the whole thing. 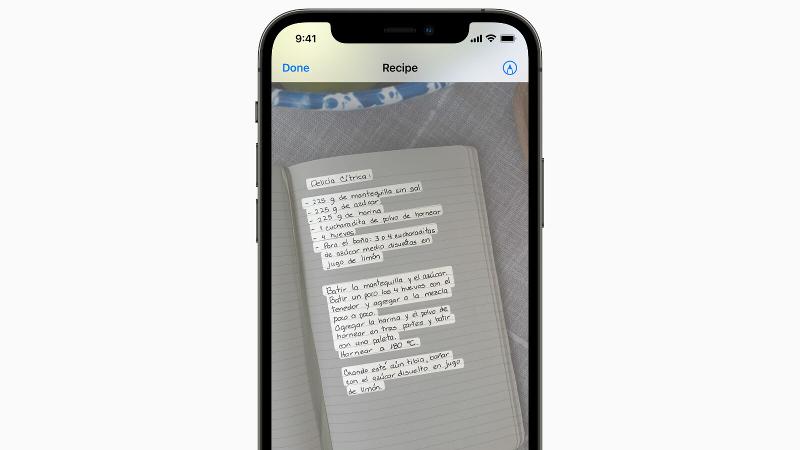 You can also use Visual Look Up to scan real-life images and receive more information about them. These might be works of art, landmarks or finding out what type of mystery flower is growing in the garden.

Safari gets a few key improvements in iOS 15.

Now you’ll have a minimised tab bar that sits on the bottom of the screen and allows you to quickly swipe between open tabs. Plus – and this is great – you can now create Tab Groups. These are, as the name suggests, groups of tabs that are put into a folder so you can access them all later. This means you don’t have to have loads of tabs open when you’re researching something. Just pop them all in a Tab Group and you can go back to them when necessary. This feature works across macOS and iPadOS too, making it very useful indeed.

To be honest, this one feature alone might make it worth upgrading from iOS 14 to iOS 15.

Maps gets a makeover, with more detailed renderings of road layouts, replete with colours for buildings and lane markings. There’s also a feature where you scan the buildings in an area if you’re lost, and Maps will tell you where you are and guide you to your destination. 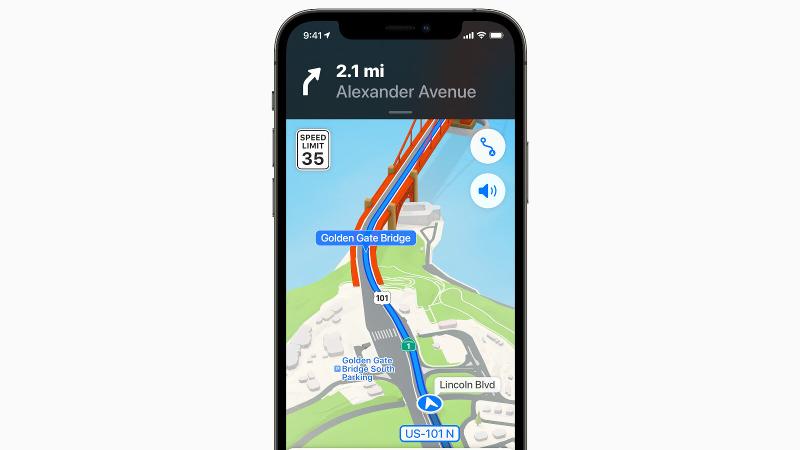 Some territories will have additional information about transit services, plus you’ll be able to see the maps shown with daylight or moonlight, depending on the time of day.

In iOS 15, the Memories feature, which groups together photos and videos from events into short movies, has been upgraded.

These are now accompanied by tracks from Apple Music, bringing the whole thing to life. You can also edit the movies to add or remove items, plus change the music and the colouring to suit your particular tastes.

iOS 15 also brings shiny new things in the form of upgraded weather maps, support for identity cards in Wallet, upgrades to privacy, including Siri now working locally rather than on Apple’s servers, with the new iCloud+ service providing secure chat, disposable emails address that forward to your main account so you don’t have to sign up to things online and be forever fending off spam, tags for the Notes app that make it easy to find and group notes together, plus more powerful Find My tools and upgrades to Translate.

Verdict: Should I upgrade to iOS 15?

All in all, iOS 15 is a comprehensive boost in useful features over its predecessor. Focus mode gives you more control over how intrusive the digital life can be, while the beefed-up privacy settings make sure your data remains your own.

FaceTime will finally become a serious alternative to Zoom and Microsoft Teams in iOS 15, and the improvements to Messages with the Shared With You feature will be sure to make life that little bit easier when trying to recall that cool thing your friend sent you.

Add to this Live Text, Visual Look Up, Group Tabs in Safari, improvements to Notifications plus several other app upgrades, and iOS 15 is shaping up to be a noticeable upgrade when it arrives later this year.

For more details, take a look at our complete guide to iOS 15’s new iPhone features.