It probably won’t have escaped your notice that Microsoft previewed a new version of the Windows operating system in June. Back when Microsoft launched Windows 10 in 2015 it said it would be the last version of Windows, but it’s clearly decided it was wrong and now Windows 11 is coming.

As a Mac user you are no doubt curious about which of your favourite macOS features Microsoft is *cough cough* borrowing, and which features will make you envious of your Windows 11 using friends. In this comparison we’ll take a look at what’s coming in Windows 11 and how it compares to macOS – and, since it’s going to arrive at a similar time, macOS Monterey.

How the design of Windows 11 compares to macOS

It has to be said: Windows 11 looks more like macOS than ever: plonked right at the bottom of the screen is what looks like the Dock from macOS; application windows have rounded corners just like in macOS and Mac OS X before it; many icons have been redesigned for a more friendly appearance; and the new Widgets look like they are on holiday from macOS.

Windows 11 also has a brand new ‘bing bong’ startup sound. It’s not the same as macOS start up sound, but we mention it because the iconic Mac start up sound recently returned in macOS Big Sur. So obviously start up chimes are all the rage right now.

There are some nice design features coming in Windows 11 that we would welcome on Macs though. For example, along with their new looks icons have fun animations. We also like that you can choose from a collection of themes – rather than just Dark and Light – to personalise your interface. 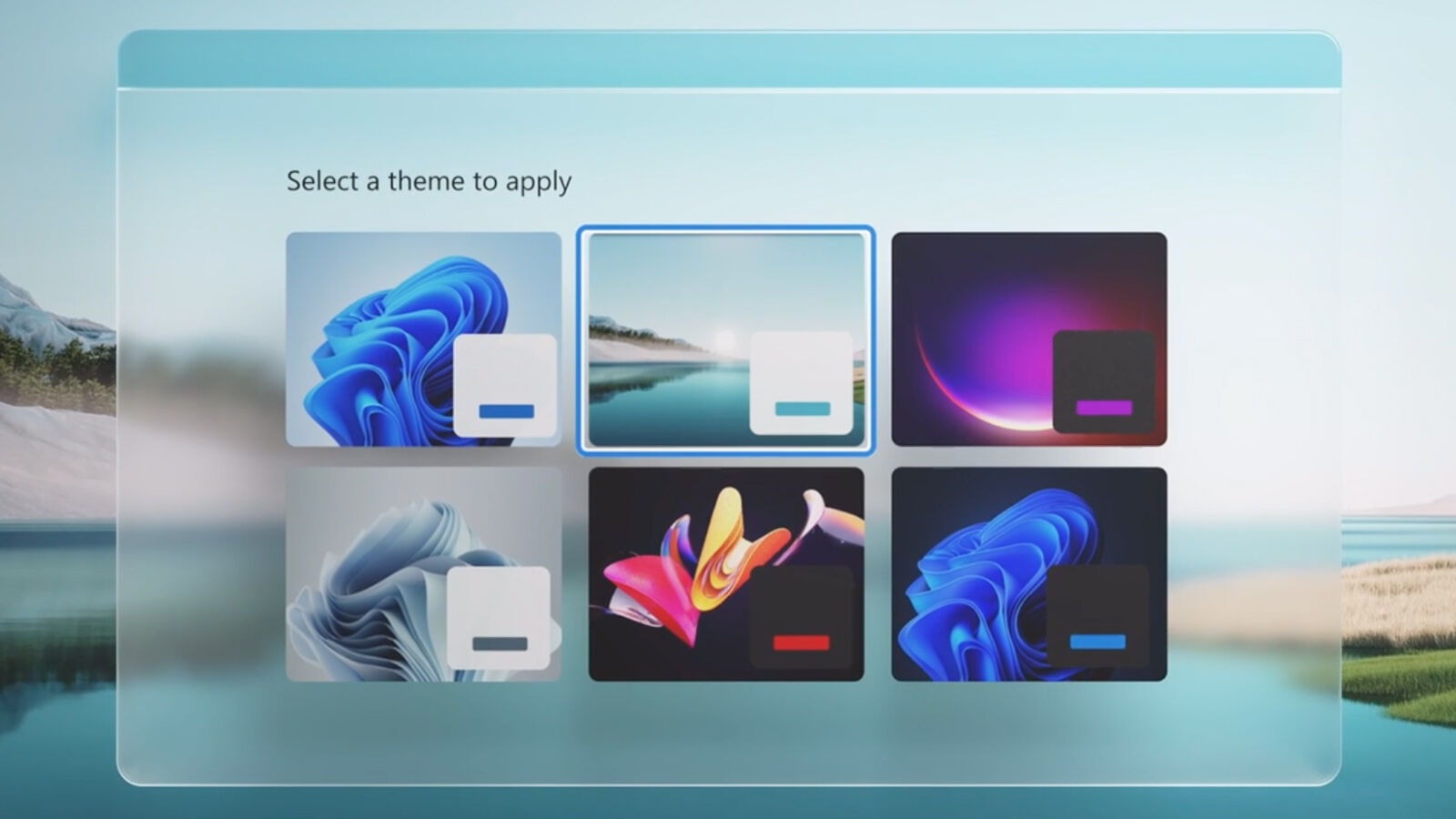 Choose your theme and you’ll get wallpapers and colours that complement each other. The closest we’ve seen to this on the Mac is the way that the new iMacs can default to colour settings that match their signature colour – so the pink iMac we recently looked at had red highlighting throughout the interface and a similarly themed wallpaper.

You can of course adjust the desktop background and screen savers on your Mac, but we’d love to see Apple allow Mac users to personalise their systems more thoroughly. Right now we have a choice of Dark and Light mode, but wouldn’t it be nice to have some set themes to choose from?

That’s how the design compares, what of the new apps and interface features? We’ll examine the key similarities and differences below.

Dock vs Taskbar and Start menu

As we mentioned above, one of the big changes coming to Windows 11 is the centrally positioned Taskbar, which is reminiscent of the Dock on a Mac.

The Windows Taskbar includes the Windows Start button (which used to be in the bottom left of the screen). On a PC the Start menu is where you can access apps, settings, and files and the redesigned Taskbar will include all of this in cleaner and more intuitive user interface. The Windows Taskbar used to be on the left of the screen and if Windows users feel too uncomfortable with the Mac-like design they can move it to the old location.

Like the macOS Dock it appears that the Windows Taskbar will feature shortcuts to the apps you use most frequently, and like the Dock there will be a shortcut to File Explorer (cousin to the Finder).

The Mac’s Dock also includes shortcuts to Downloads, the Trash, anything you have minimised, and LaunchPad, which is an overview of all the apps installed on your Mac. In comparison the Taskbar looks less cluttered, but you can click on the Start menu icon in the Taskbar on Windows to access the Start menu, which includes pinned apps and an All Apps sections so Windows users can view everything they’ve installed. 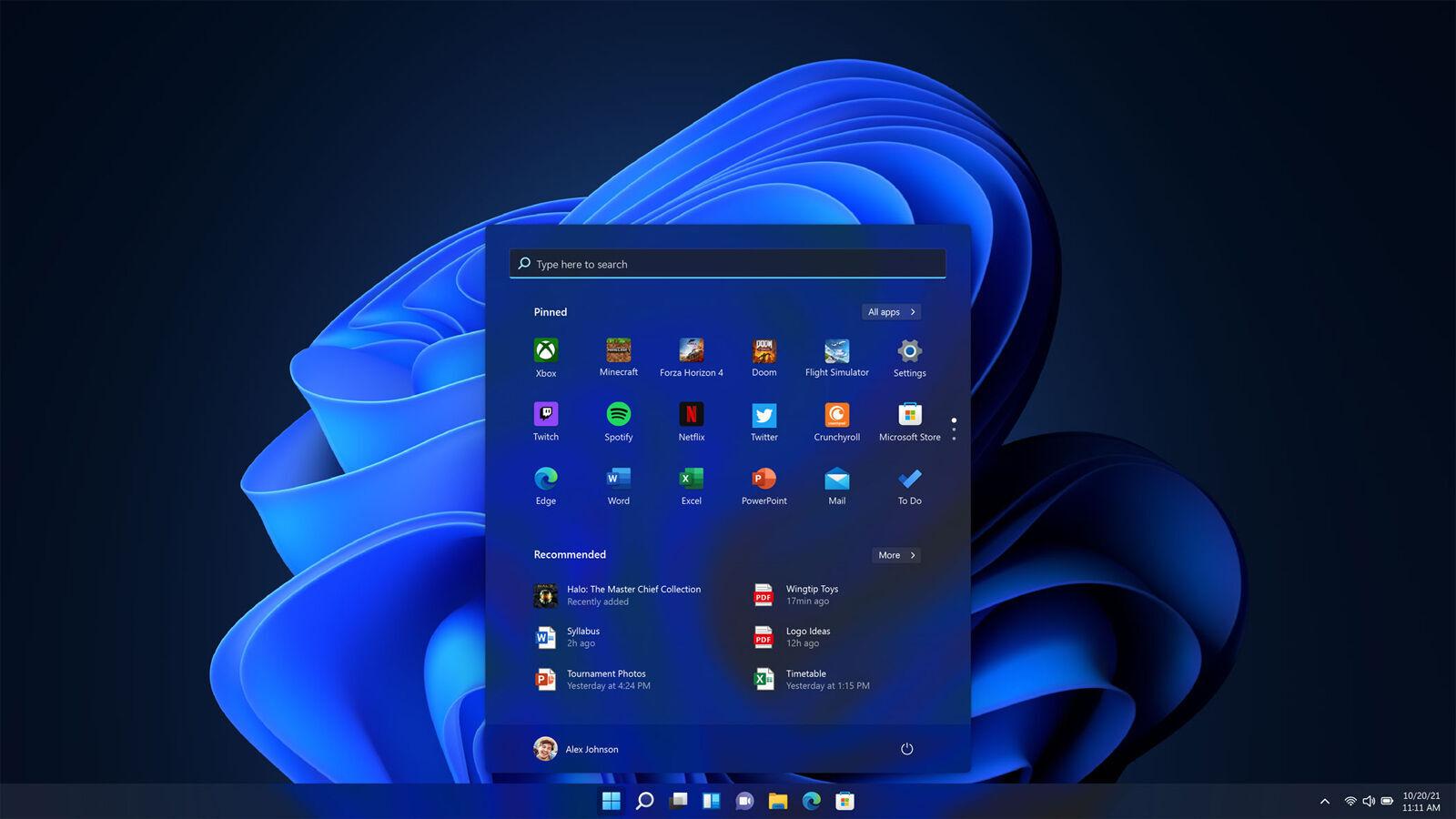 We like the Recommended section, which provides shortcuts to recently used files, folders and apps – not only those accessed on the PC, but also on other devices and even if they are stored on cloud services such as OneDrive and Microsoft 365.

Having seen this new layout for the Taskbar we really hope that Apple update Launchpad in a future version of macOS, ideally so that it doesn’t take up whole screen. It could, for example, take on the new App Library design coming to the iPad in iOS 15.

Another aspect of Windows 11 that looks like it’s been inspired by macOS is Widgets. Widgets aren’t new to Windows, but the way that Microsoft has updated the interface so that a new Widget tray now pops up on the left of your screen is certainly reminiscent of the way that Widgets and Notifications appear on the right side of the Mac.

Widgets are designed to provide users with important information at a glance, the disappointment for Mac users is simply the fact that there aren’t many widgets available beyond a calendar, clock, news, and stocks. Compared to the Widgets available on iOS this is quite embarrassing. Maybe if there were more useful Widgets we’d actually look at them more often, but right now it’s an unappreciated feature of macOS.

Microsoft will probably have more Widgets on offer, although like Apple it will be reliant on third parties creating them. Like Apple Microsoft will also present news and stocks in this section.

One feature of the Window’s operating system that we’ve been craving for a few years now is the ability to snap window layouts.

Sometimes – most of the time – you want more than one application open, but just having it open isn’t enough. You want to be able to see it – to not miss a message in Slack or an important email. While Notifications can help with this – and go some way to stop these distractions – often you are using two applications in tandem.

On a Mac you will probably have a number of applications open and overlapping each other on the screen, you’ll be moving them aside, or clicking on one to bring it to the front. It works, but it’s not tidy.

On Windows there is a way to arrange and snap Windows – and it’s getting even better in Windows 11. A Snap Layouts button will appears when you hover your curser over the maximise button and you will be able to choose a neat arrangement for the apps on your screen. 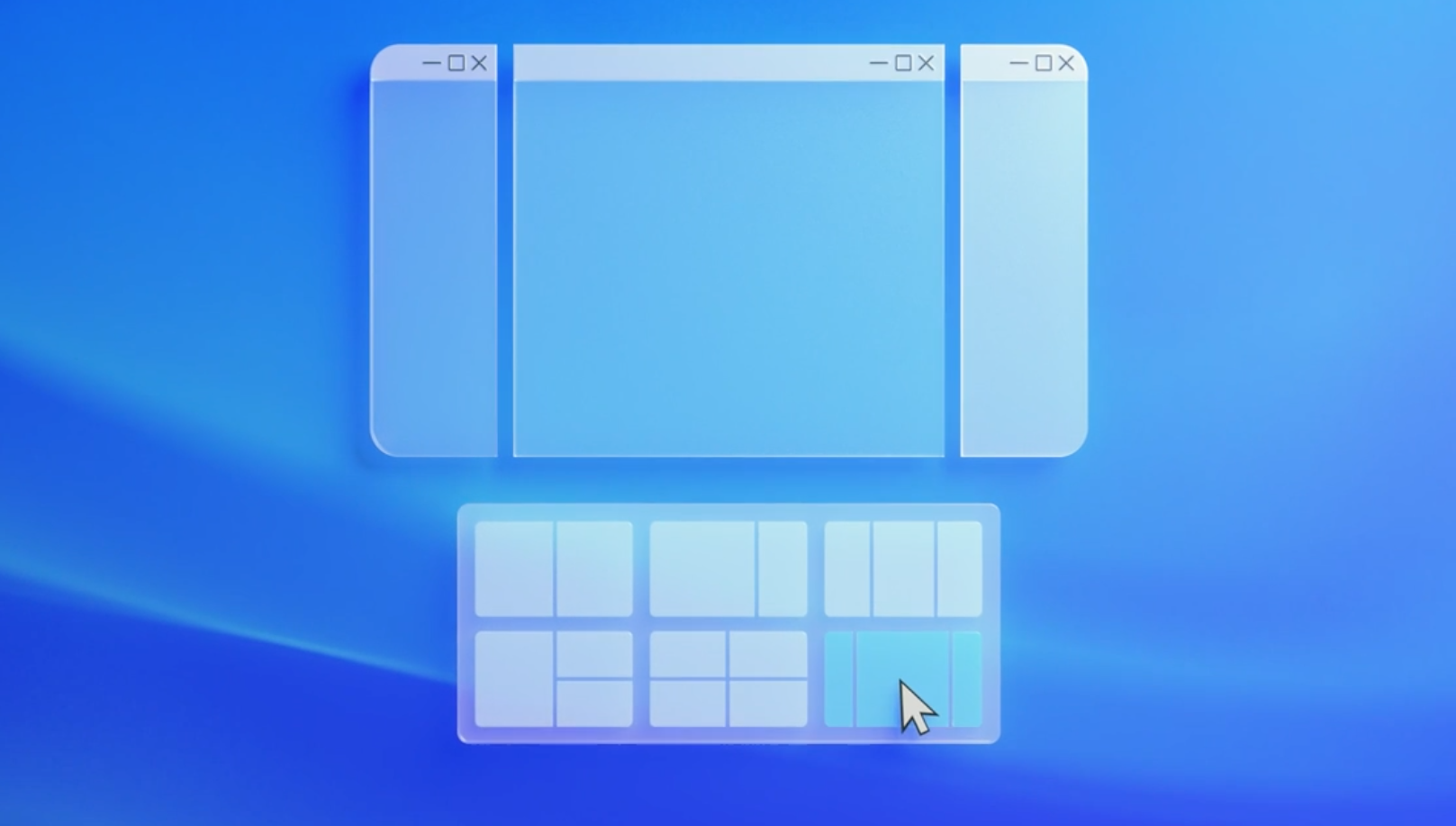 The closest Apple has got to this is full screen multitasking where you can slide in a second application, but it just isn’t as good.

The Windows 11 Snap Layouts will also be maintained if you add external monitors. This is seems similar to the way that Spaces on macOS can group certain apps together. We’d love to see a combination of these features on a future macOS.

There is also a new look coming to File Explorer in Windows including a simplified toolbar with icons that represent basic actions like creating a new folder and sharing files.

These icons are reminiscent of those seen in the Finder toolbar, suggesting that Microsoft has concluded that Apple’s way is better.

In Windows 11 Settings – which has its equivalent in System Preferences on the Mac – is also getting a pretty major redesigned, with new colourful icons. Those customisation settings we mentioned earlier can be accessed here.

Now Microsoft has made a similar claim. Apparently Windows updates will be 40% smaller and applied in the background.

Windows 11 will introduce the ability to run Android software. Windows users will apparently be able to install Android apps from the Amazon Appstore and use them on their PCs.

You’ll most likely be aware that Apple introduced this functionality with the M1 Macs when they launched in November 2020, so it does look like Microsoft is playing catch up here. 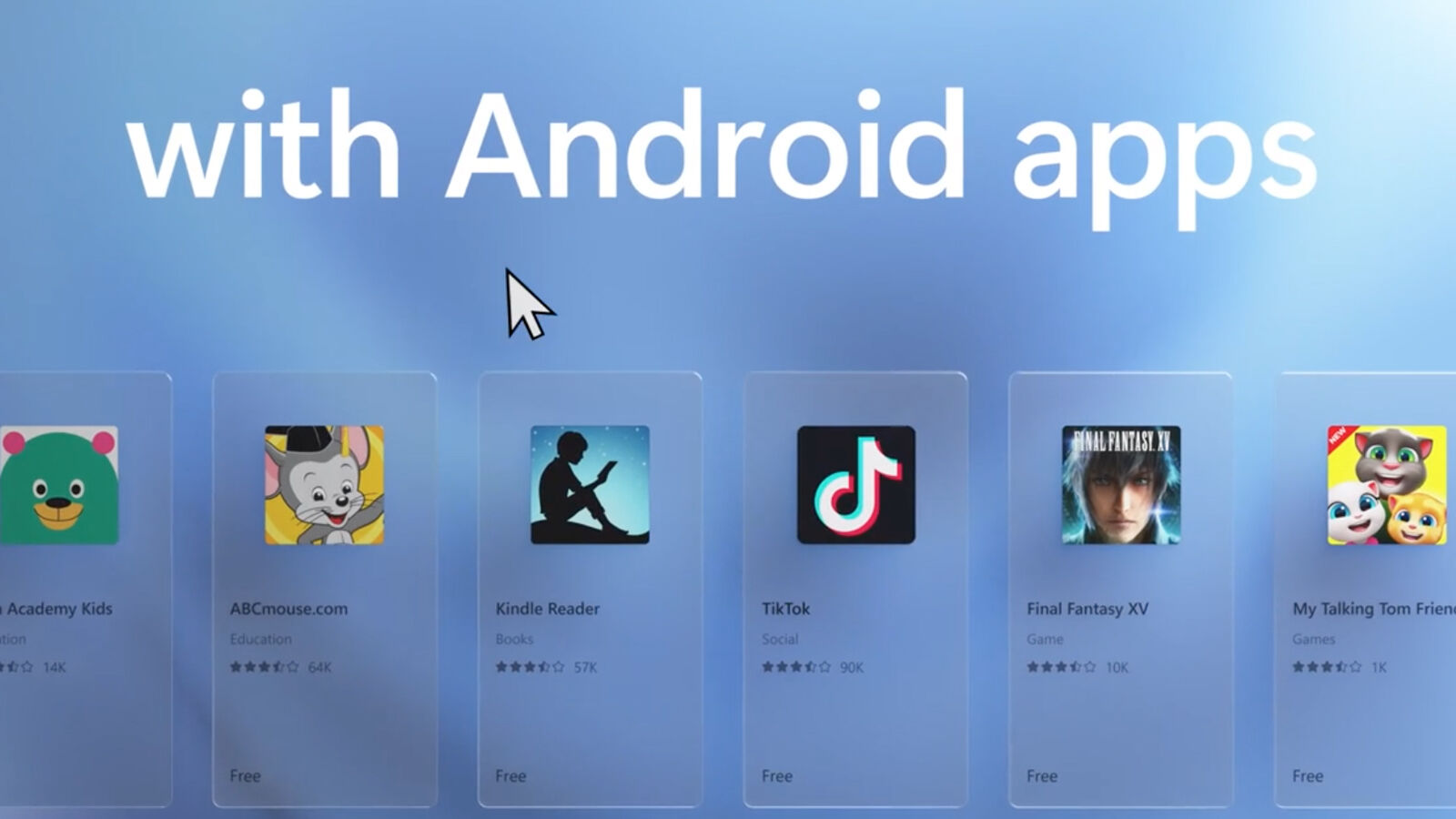 That said, Apple’s really underdelivered in terms of iOS-apps that are actually available to run on the Mac. We counted about 45 such the last time we looked.

Windows users will have the ability to run Windows 11 on tablets though. There will be many iPad users wishing that the same could be said of macOS and Apple’s tablet.

Clearly the two operating systems, as different as they are in the source code, are becoming more and more aligned. But while we could say that Microsoft has been inspired by Apple in its plans for Windows 11, Apple could do with paying attention to some of the things that Windows does well.

Windows 11 will be free for eligible PCs. You can check if your PC will be eligible using the PC Health Check app.  It will require a TPM 2.0 chip and a graphics card compatible with DirectX 12. Wondering if you’ll be able to run Windows 11 on your Mac? Read: Will Windows 11 run on Mac?

macOS Monterey will also be free and is compatible with Macs from around 2015 – full compatibility list here.

macOS Monterey will also arrive in late 2021. The developer beta is here now and the first Public beta is expected in July.