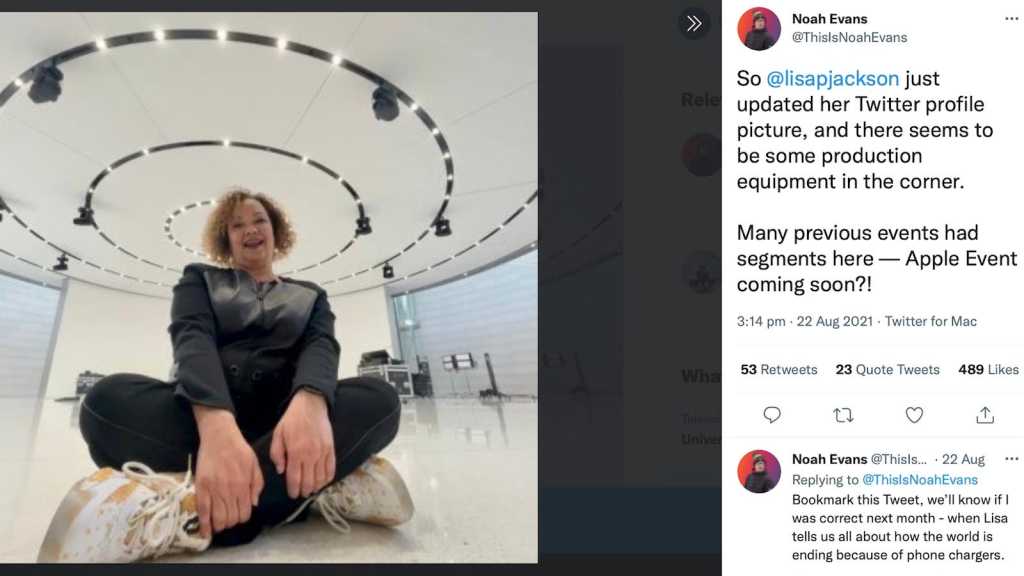 Since 2013, Lisa Parez Jackson – a chemical engineer and environmental politician – has been responsible for environmental protection at Apple. She’s become a familiar face thanks to Apple always giving her a short time slot in keynotes to mention how green the company has become. (Read about the Women at Apple.)

Right now attention has turned from Jackson’s environmental role at Apple to her new profile picture on Twitter. On the picture she sits on the floor in the entrance hall of the Steve Jobs Theater. She smiles at the camera, but much more interesting is the background where we see production equipment – hinting that the photo may have been taken while filming was taking place.

So @lisapjackson just updated her Twitter profile picture, and there seems to be some production equipment in the corner. Many previous events had segments here — Apple Event coming soon?! pic.twitter.com/kKgEUp3EJC

It is no secret that the next Apple event is just around the corner. And if Jackson’s photo were up-to-date, this would mean, on the one hand, that Apple has already started producing the keynote, and on the other hand, that virtual keynotes await us again this autumn.

Due to the pandemic, Apple has been forced to hold its keynotes virtually and without an audience for the last year and a half. Since there has been a relaxation of Covid measures in many areas in the US, some fans had wondered whether Apple would present the new iPhone 13 (latest news about iPhone 13) and the new Apple Watch Series 7 (latest news about the new Apple Watch) to a live audience in September. This seems unlikely given that Apple has decided not to insist employees return to work until January 2022.

We won’t know Apple’s plans until Apple sends out its official invitations for the next Apple Keynote – which will probably be received a week before the event, which is expected to fall on 14 September. Read When is the next Apple Event.