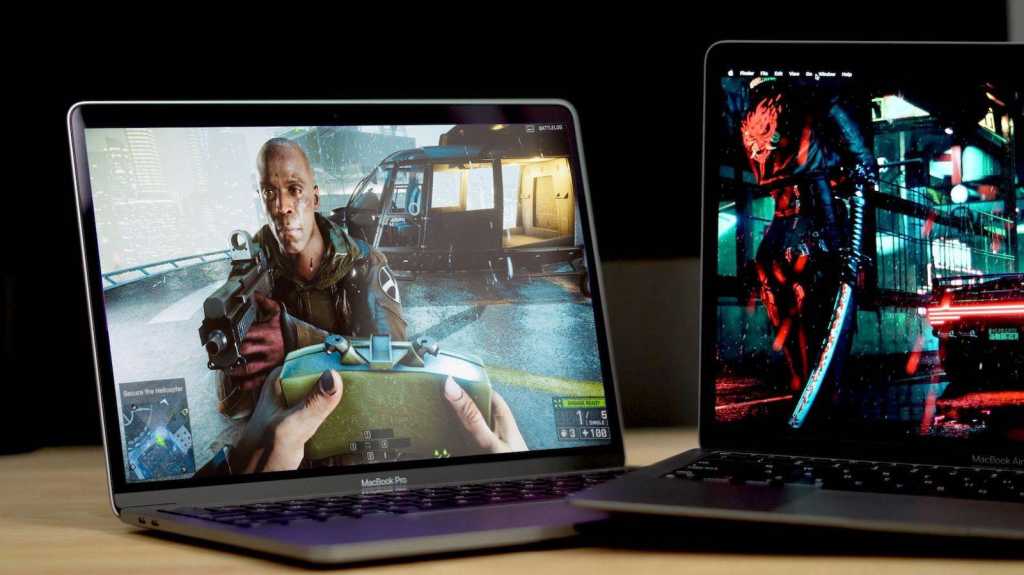 We climb the deck of a majestic aircraft carrier. The rain whips us in the face, we get in, the lights in the cockpit go on. Shark 4-6, you have permission to start. Rudder Right: Check, Rudder Left: Check. Sidewinder launch system? Check. CoaxiaL-MG? Check.

All systems online, ready to go. We take off and the more the steel bird accelerates, the more the raindrops hit the window, then as we break through the cloud cover the sunshine is blinding. What a sight. And all this on a MacBook Pro with M1 processor (read Best Mac for Gaming). Battlefield 3 is perhaps the most iconic shooter of the last decade, with the most detailed single player campaign a shooter has ever had.

The idea of installing this jewel on the M1 MacBook Pro came quite spontaneously the evening before a long train journey. It’s super easy:

Once a compatibility layer called Rosetta 2 from macOS Big Sur runs over it, the game starts directly within three seconds. Rosetta 2 is Apple’s software emulation layer for X86 applications, which was developed specifically for Big Sur.

No problems so far, in the menu the system recommends 1,920×1,080 for medium details, with 4x Anisotropic Filtering and SSAO – Screen Space Ambient Occlusion. It’s not the most graphics-hungry ambient occlusion technology, but Battlefield 3 still looks great on the MacBook’s Retina display: Sharp textures and the whipping rain looks just as good as on a gaming laptop with a high-end card. The scene runs in 45 FPS. Of course; a MacBook is not an ultra-high-end gaming PC, but, especially in the single player mode, everything over 40 FPS is well playable.

And it’s a really interesting experiment, because we must not forget one thing: The new MacBook Pro M1 is a relatively cheap laptop. Battlefield 3 is currently playing here on the basic version with only 8GB RAM for £1,299/$1,299. Sure, there are cheap gaming laptops in the price range, but the MacBook Pro is the device that virtually every creative person has in their bag.

On the 13in screen the game plays very well. We have also connected the M1 MacBook Pro to a 27in monitors and a 60in TV screen. On a very large 4K display 1080p appear less crisp than on the internal Retina screen. 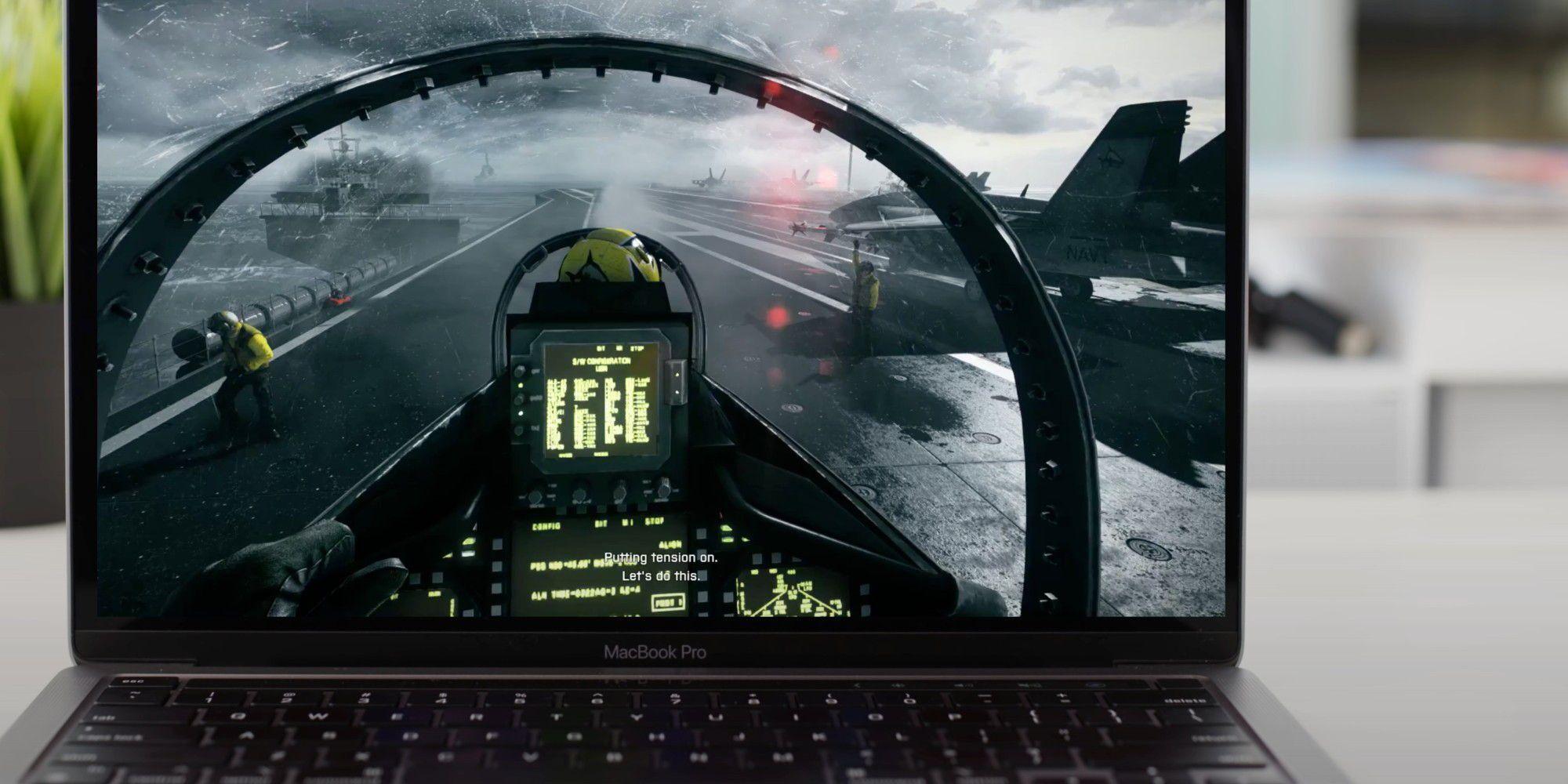 At 1.4kg, the current 13in M1 models are nice and light. The 8-core CPU is a system-on-a-chip, a combination of CPU, GPU, DDR4 memory, I/O chip and Thunderbolt controller on one chip, like those found in smartphones.

Battlefield 3 runs, as I said, in 1080p and medium graphics settings at 45 FPS, if you prefer a higher frame rate, you can go down to 900p. This reduces sharpness, but the frame rate rises to an average of 50 FPS.

We have a similar experience with Call of Duty: Black Ops 3, which runs in 1080p with high settings on 47 FPS. This is remarkable because most Windows 10 laptops with only 8GB RAM are not suitable for playing this at all – 16GB is the minimum for Windows 10 and 11.

It’s interesting to note that Apple sells numerous triple-A games in its App Store such as Shadow of the Tomb Raider, Bioshock, XCOM 2 and so on. (Read: Best Mac Games.)

Under Big Sur almost all games can be played via two methods: either via Parallels 16 or Crossover, which in its new version sometimes delivers significantly better performance values, so we want to go into this in more detail.

Parallels 17 vs. Crossover 21 for gaming

The biggest advantage of Parallels is the emulation of classic Windows, where we can install everything – from Steam to EA Play to Ubisoft Connect. It is a 64-bit emulator that sometimes delivers really impressive results in some games, such as Max Payne 3.

The biggest disadvantage of Parallels: To emulate Windows, Parallels blocks four of the eight CPU cores and we can only use half of the RAM. In our test M1 MacBook Pro there are only 8GB RAM, so with this variant only 4GB are available, which is very little depending on the game.

With Crossover, which converts Windows API calls into Mac OS API calls, the advantage is obvious: You can use the full performance of the system.

The price of the software is approximately the same: Crossover 21 costs £48/$60. Parallels 17 costs £69.99/$80. There is no clear winner here, because more games are compatible with Parallels in nominal terms. However, we were often able to determine significantly better performance values via Crossover. Take the new Mass Effect: Legendary Edition: It runs at 30 FPS in Parallels 17 on normal settings, but low resolution of 1,280×720 pixels. In Crossover, we achieve slightly higher FPS (about 35) with the same graphics settings, but in 1,600×900 pixels, which makes the image look much sharper.

GTA 5 runs on Parallels 17 only extremely stuttering with strong FPS drops in the single player mode, with Crossover we achieve an almost stable 60 frames per second in 1,920×1,080 with normal graphics settings. So if you want to play GTA 5 on your M1 system, we would advise you to crossover. However, the Rockstar Social Club is not yet compatible with Crossover, so GTA Online is not available. 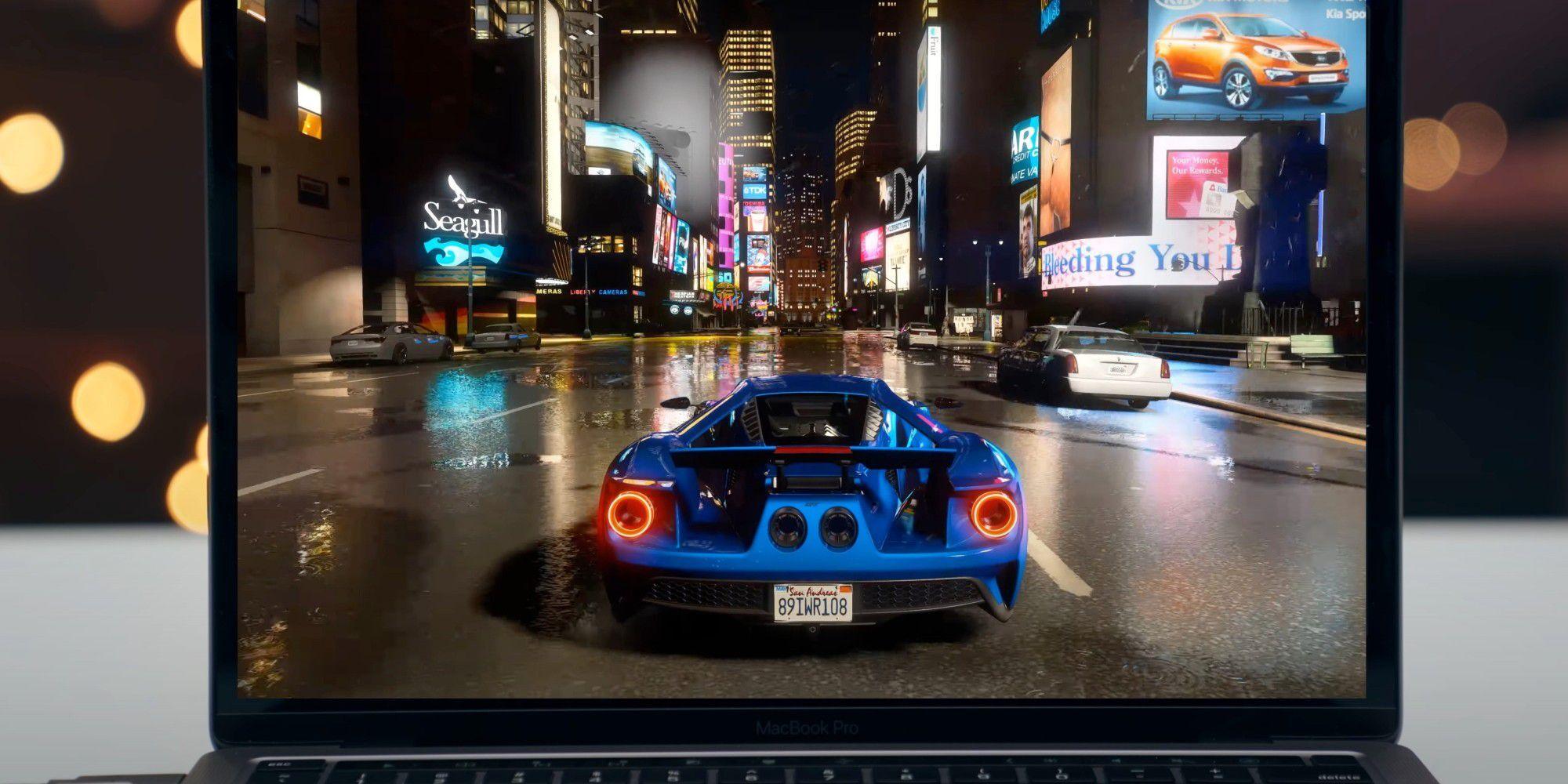 If you are a little familiar with graphic settings and use some tricks you can get really high FPS from the entry-level MacBooks. With a connected display, we play in 2,560×1,440 with all graphics modes on low, but the 3D resolution at 100 percent with around 60 FPS. If you want more, all you have to do is halve the 3D resolution – this determines the resolution with which objects are shown in the game, i.e. houses, doors, weapons, items. If you attach less importance to graphics you can achieve the desired 100 FPS without an expensive gaming PC. In these times when modern graphics cards are expensive, Apple seems to offer an alternative, which is ideal if you need a MacBook for work or study anyway.

Can M1 Macs be used as a streaming machine?

Yes, with OBS. OBS has released its own software for Big Sur and M1s. Get it here.

This meant that if you want to you can connect a M1 MacBook to a console like the Xbox Series X or PlayStation 5 via Elgato at 60 FPS and use OBS to stream at a bit rate of 6000 Kbps in 1080p.

Most streamers use dedicated hardware that calculates the stream itself, so this is an interesting option.

Why M1 Macs do not get hot and loud?

The keyword is single vs. multi-threading. If you have used a MacBook with Intel CPUs, you know how extremely hot they have become because Intel’s chips had big problems with the aluminium chassis.

MacBook bodies are cut from one piece of aluminium, so no parts are assembled, which is why they look so perfectly processed and show hardly any signs of wear even after many years. Most other manufacturers use a lot of plastic and especially ventilation slits on the sides, Apple only has them on the back, hence the heat problems that Intel could never solve.

What you should know: When Apple redesigned its MacBooks in 2016 it was on the assumption that Intel would produce a new CPU generation with lower heat generation, but Intel did not deliver here. As a result so-called thermal throttling occurred: If the device reaches a certain temperature, the processor clocks down. On paper, the i9s are very fast, but they led to an enormous number of problems in that generation of MacBooks. Apple consequently decided to end the partnership and build its own system-on-a-chip variant based on ARM.

So how did Apple’s engineers manage to design so much performance with significantly lower heat generation, resulting in very quiet M1 devices? The MacBook Air comes without a fan, while the fan in the MacBook Pro rarely turns on at all and never turns up. Apple’s architecture is based on single threading, so a task is always completed.

With Intel, many tasks are processed simultaneously. The X86 architecture was introduced in 1978, at a time when memory was very expensive – so you wanted to calculate as much as possible on the CPU itself. This is quite different today, memory has become very cheap and there is no longer any reason for this CPU focus, which slows down the system itself (as more is calculated on the CPU, the longer the “snake” of commands that want to be processed). This in turn requires an enormous amount of logic to assigns these processes. In other words: More complexity = more logic = higher energy expenditure.

In addition, x86 is based on CISC (Complex Instruction Set Computer). Command lines can be any length and complexity here. ARM is based on RISC (Reduced Instruction Set Computer), here each command line is the same length. So there is not an entire motorway system here, but only an expressway. Incidentally, that’s why Windows 10 games have to be emulated so elaborately.

What Apple’s engineers have done is perfect this single threading. The goal is to process the cue, i.e. the queue for processes, as quickly as possible, with maximum energy efficiency. Apple has had a lot of experience with this for a long time, because iPhones are constantly in our hands, they must not get warm – we reach for the bottom of a MacBook much less often. Heat management of APUs is therefore an issue for which Apple’s engineers and their suppliers had to develop solutions for very early on. With the benefit of this history, the M1s have been developed, and as a result they are brutally efficient.

This 10 watt processor from Apple performs similarly to a comparable 45 watt processor from Intel. So it has been possible to increase efficiency by 4.5x, which is already remarkable, and then you have the five-nanometer base with its 16 billion transistors. And all this is only the first generation of Apple silicone…

Benchmarks of all tested games

How a gaming Mac could look

How to play PC games on a Mac