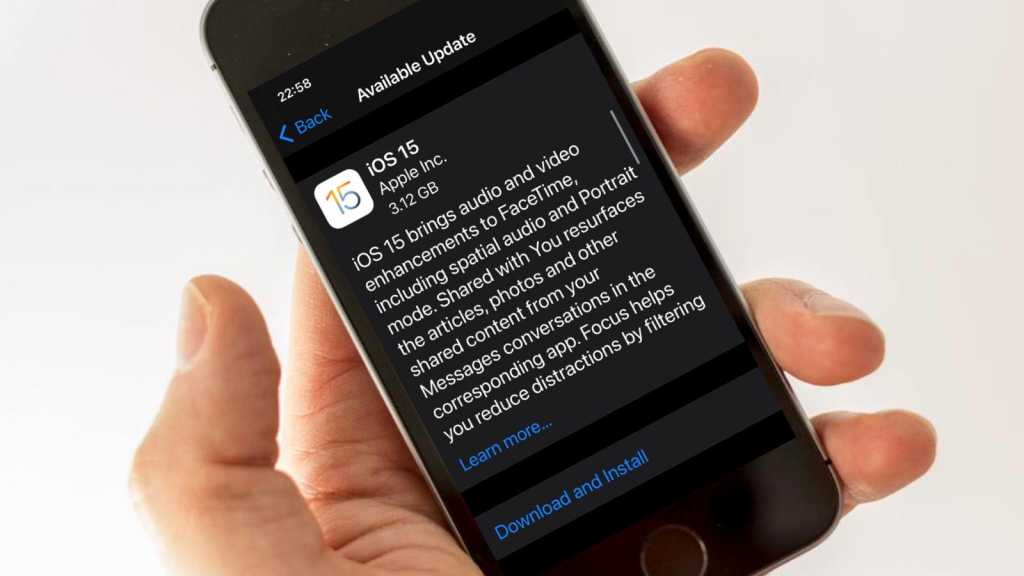 iOS 15 arrived on 20 September 2021 and it can be installed on a number of older iPhones. But many owners of these older iPhones, including the first-generation iPhone SE, iPhone 6s, and even the iPhone X, could be wondering if the new system will run well on their older chips.

In the past we’ve heard iPhone users complain that their iPhones have slowed down after a major update like this, so this is a valid concern (even if Apple usually manages to address the issues with further software updates).

Apple claims to support all these iPhones with the iOS 15 update, but it is no coincidence that the company restricts some functions to newer devices (iPhone XS and later in this case). Apple has reserved some of the best features for the newer iPhones for good reason – older iPhones aren’t capable of running them. Read: Many iOS 15 features only work on newer iPhones

Hence owners of older iPhone handsets have a real quandary when it comes to the question of whether to update to the new iPhone operating system. Not only is there a question of whether iOS 15 could slow down their iPhone, the few new features that are actually available for them may not be worth the risk.

If you have an older iPhone you will no doubt be wondering if installing iOS 15 would be something you might regret later. We are here to help you find out.

Last week we put an iPhone 11, an iPhone X and a first generation iPhone SE to test. We installed iOS 14.7.1 and restored from a private iCloud backup (so that the test accounts would represent typical conditions, with open Safari tabs and accumulated rubbish gathered over the years, rather than a sterile handset).

We made measurements in iOS 14.7.1 and then we installed iOS 15 Release Candidate on all three devices and ran the same tests. Here are our experiences.

Apple not only worked hard on the surface of Safari, it also improved the code in the background. In both of our tests – Jetstream 2 and Basemark Web 3.0 – all three iPhones running iOS 15 saw better scores than when they were running iOS 14.7.1.

As you can see from the chart below, in the Jetstream browser test the improvement was marginal for the two newer iPhones, but the old iPhone SE saw a significant improvement. 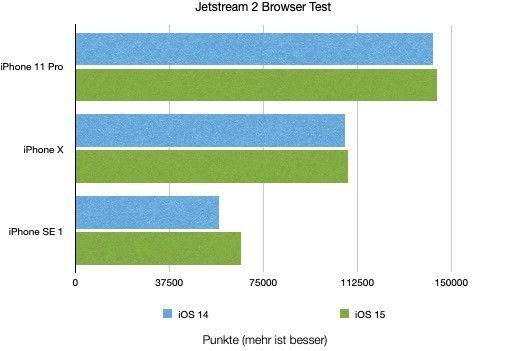 In the our Basemark test all three iPhones under iOS 15 performed better. 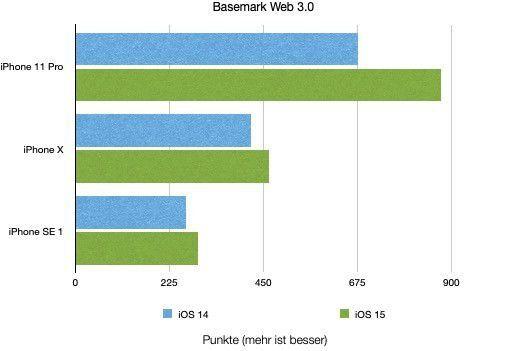 You might think that CPU performance should remain the same on each iPhone, regardless of operating system, but Apple keeps improving drivers and these improvements (or errors) can be reflected in performance. For these tests we used Geekbench to record singlecore and multicore scores as well as Geekbench ML to gage the performance of the chips in machine learning.

Note that the two older smartphones – iPhone X and iPhone SE – do not include the Neural Engine, which is responsible for such ML calculations from iPhone XS onwards.

We would have preferred to use the APSI Bench test app, but that app is no longer compatible with the first-generation iPhone SE.

There are no significant differences in single-core measurements on the newer iPhones, only the iPhone SE sees any real benefits from iOS 15.

The bad news is that with multi-core measurements the iPhone 11 actually performs slightly worse under iOS 15 than it does on iOS 14.7.1. 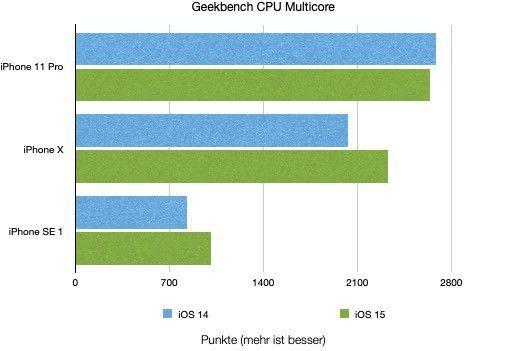 For ML measurements all three iPhones benefited from the update. 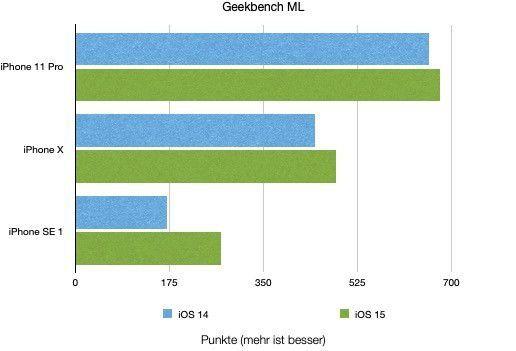 For graphics performance, we ran two benchmark apps 3D Mark Wild Life and GFX Bench Metal on the three iPhones. For the tests we downloaded a graphics-intensive app from the App Store, installed it on all three iPhones, set up the notifications and Games Center, and restarted. Before that, we naturally removed them from the app storage.

Amazing but true: the graphics performance deteriorated somewhat for all three iPhones. There is an outlier in the measurements on the iPhone 11 Pro (in GFX Bench Metal), but even with the measured start times of Marvel Future Revolution the newer device was a bit slower when running iOS 15. 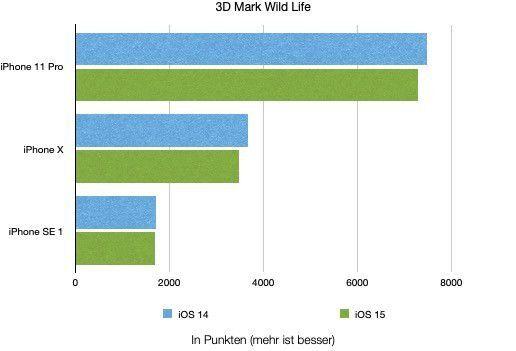 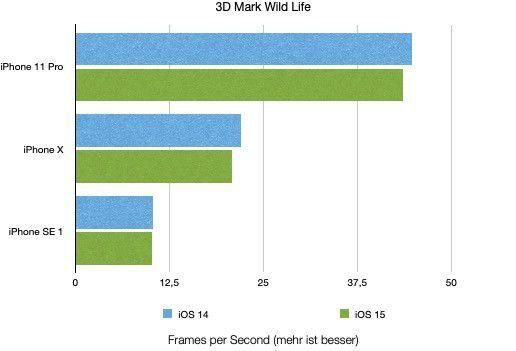 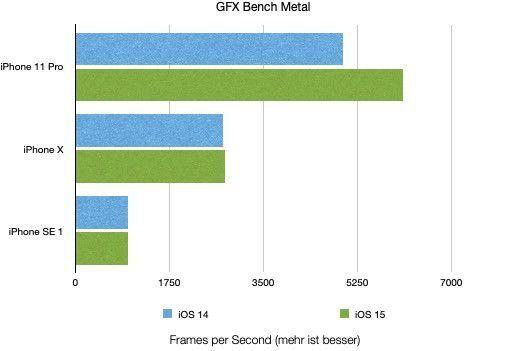 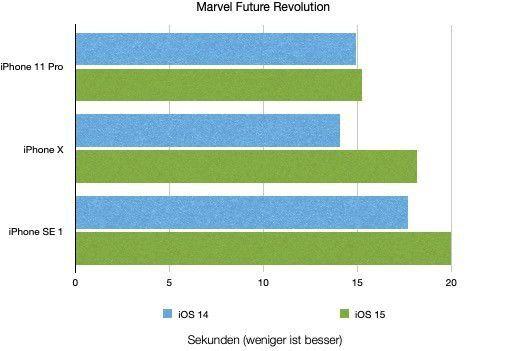 These scores should be taken with a pinch of salt on the basis that we tested with the Gold Master, rather than the final version. Apple may have ironed out errors prior to the final update, and in subsequent versions. Hence we will measure this phenomenon again with iOS 15.1 or 15.2.

Even with older devices such as the first-generation iPhone SE, iOS 15 can be safely installed. Safari gets faster and the overall performance is not slowed down by the latest system.

As for why iOS 15 performs a little worse in graphics performance we will have to wait for future updates to see if this is addressed.