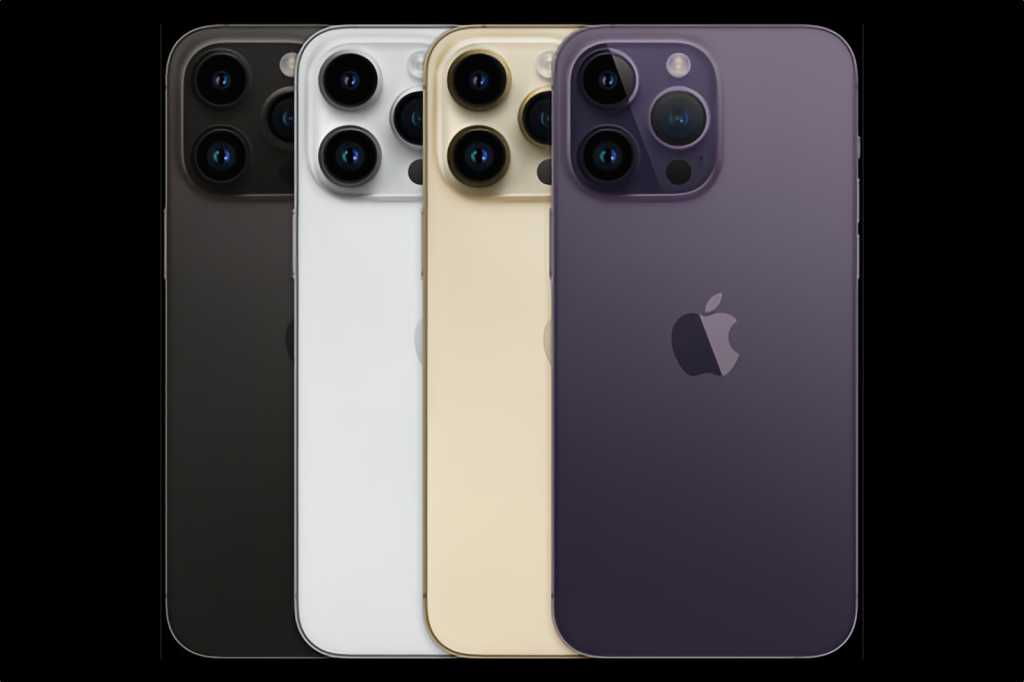 In this article we reveal all the details you need to know about the new phones, from their release date and pricing to design changes, tech specs and new features.

When the new phones arrive, you’ll be able to find the lowest prices with our guide to the best iPhone deals.

And our guide to help you decide Which iPhone to buy and Best iPhone ranking.

The iPhone 14 handsets were announced at Apple’s Far Out event on September 7.

All four models will become available for pre-order on September 9, and three of them (the 14, 14 Pro and 14 Pro Max) will then go on sale a week later on September 16. But anyone looking to buy the iPhone 14 Plus will have to wait almost a month, since it won’t hit stores until October 7. See: How to pre-order an iPhone for tips to help you be one of the first to get your hands on the new iPhone.

And here are the prices for the Pro models:

You will be able to pre-order the new iPhones from Apple’s website.

Two very different stories here. The iPhone 14 is largely identical to the iPhone 13 (although you do now have the option of a larger screen, which we’ll discuss in due course), but the iPhone 14 Pro and Pro Max see significant design changes.

As predicted the Pro models lose the notch, which is replaced by two smaller floating apertures for the front-facing sensors, but these have been made far more of a feature than expected.

Joined together by a black bar to form a single thin lozenge, Apple calls this the Dynamic Island. Its appearance, including size and controls, varies depending on the app and context. It acts as a sort of mini widget, displaying sport scores, running timers, or other basic information from an app you’ve swiped out of, or allowing you to interact with an app without opening it in full.

This is an ingenious way of turning what could have been an annoyance–we have to wait at least another year for a genuinely all-screen iPhone design–into an appealing feature.

In terms of physical dimensions, this year’s Pro models have slimmer bezels around the screen, yet the camera module on the rear is larger than previously. The lenses themselves are bigger in diameter, and project further from the back surface of the phone. We suspect that most buyers will want to put the 14 Pro in a case to protect this protuberant module, although that would mean missing out on the pleasing new color finishes.

The 14 and 14 Plus come in five colors: Midnight, Starlight, (Product) Red, blue and a new purple finish. The Pro models come in silver, gold, a new Space Black and a different and much darker purple, called Deep Purple.

There’s no new version of the 5.4-inch iPhone mini format. (The iPhone 13 mini remains on sale, however, so small-handed buyers still have that option.) Instead Apple has launched a large-screen non-Pro model called the iPhone 14 Plus.

So this is the new lineup:

Other than the size of the 14 Plus, the screens of the non-Pro models are largely the same as that of the 13. But the 14 Pro and 14 Pro Max gain an always-on screen. This will dim automatically and minimise animation and onscreen power usage (it can dynamically drop to a refresh rate of just 1Hz) when the device is idle in order to preserve battery life, while continuing to show the most important information and certain widgets.

Both Pro and non-Pro iPhones get camera upgrades this year, although there’s no prize for guessing which is more impressive.

The basic specs here are the same as last year: you get a dual-camera array with 12MP wide and ultra-wide lenses. But Apple promises better performance thanks to the inclusion of a faster aperture and larger sensor on the main camera.

The TrueDepth camera at the front has also been upgraded. It gains autofocus, and here too you should see improved low-light performance thanks to a wider aperture.

The headline upgrade here was leaked well in advance. As expected, the iPhone 14 Pro gains a 48MP wide-angle camera on the rear.

That impressive figure, however, could be slightly misleading. Most photos you take with the 14 Pro won’t be 48MP at all; they will be 12MP, albeit with far greater detail, as the camera uses image processing to combine four pixels into one.

As well as packing more megapixels, this sensor is 65 percent larger than the Wide camera in the iPhone 13 Pro, which again means better low-light performance–up to 2x better, according to Apple’s claims. There’s also a new Photonic Engine computational system to help capture more detail when light is limited.

There are lots of improvements under the hood. Here are the key new features and spec upgrades.

Apple’s renewed interest in personal safety can be split into two main strands, both of which are also available on the new Apple Watches: a new crash detection feature, and satellite connectivity for emergencies.

Crash detection uses an upgraded gyroscope and accelerometer to recognise when you’re in a crashing vehicle–much like the older Fall Detection feature, but for potentially far more dangerous situations. If the iPhone thinks you’ve been involved in a crash, it will (unless countermanded) call emergency services and notify your preferred contacts.

Emergency SOS via satellite, meanwhile, is a feature that can use satellite connectivity to get in touch with emergency services when you’re out of cellular range. (It’s based on short pre-scripted texts, but if the emergency provider you’re trying to contact only responds to calls, a team of intermediaries will handle that for you.) You’ll need a clear view of the sky, but the feature will show you where to point the device so as to establish and maintain a good connection.

The satellite feature is initially available in the US and Canada only. At some point it seems likely to carry an ongoing fee, but Apple says it will be free for the first two years after purchase.

The word “new” there is debatable, but there’s certainly change of sorts in the processor department.

The non-Pro models are still running A15 Bionic chips, just like all four of the 13-series iPhones last fall. But this has been upgraded to carry an additional GPU core (like the one in the 13 Pro last year), and should thus deliver somewhat improved performance over the standard 13. (It’s also possible that Apple has increased the RAM allocation from 2021, as was rumored before the event. We won’t know until review samples start showing up, as Apple doesn’t publicly disclose RAM.)

Far more excitingly, the Pro models get processors from the next generation: the A16 Bionic. As was predicted back in 2020, this is being manufactured with a 4nm rather than 5nm process, which should mean improved performance and power efficiency. Apple hasn’t given us much concrete detail about the performance we can expect from the A16 (other than that it has 16 billion transistors and the Neural Engine can process nearly 17 trillion operations per second, up from 15.8 trillion in the A15), but the company did claim it’s 40 percent faster than the closest competition.

In other words, expect the 14 Pro to absolutely obliterate any and all speed benchmarks, while delivering less noticeable improvements in the real world until the available software can catch up with its capabilities.

Apple is claiming small improvements in battery performance across the range, with the three non-Plus models all gaining an hour on their predecessor. The iPhone 14 Plus, of course, has no direct predecessor–but its larger chassis means a large battery that should comfortably outperform the iPhone 14 Pro. Here are the claimed figures:

For our individual news stories discussing the launches, read Apple unveils the all-new iPhone 14 Plus and The iPhone 14 Pro is official.

We’ve also got a hands-on with the iPhone 14 Pro, which we got to try out at the event.