It’s shaping up to be a huge year for Apple, and the latest version of the company’s market-dominating smartwatch is one of the key releases for 2022. But what’s in store for the Apple Watch?

In this article we gather up all the latest leaks and rumours about the Apple Watch Series 8 launch in 2022. We cover its likely release date, pricing details, new features, tech specs and design changes.

Check back regularly for the latest Apple Watch Series 8 gossip.

What will the new Apple Watch be called?

An easy one to start with – the main release this year will almost certainly be called the Apple Watch Series 8. Of the nine models released so far, only two (the original Apple Watch, and the cheaper Apple Watch SE) have had names that aren’t based on the word Series and a number.

Talking of the SE, however, it’s possible we’ll see a second (or even third) model with a different name released alongside the Series 8. Other than a second-gen SE, possibilities include an “Apple Watch Pro”, a brand Apple reportedly considered back in 2015, or an Apple Watch Sport.

We’ve covered multiple rumours about the Apple Watch Pro and Sport in recent months. They’re not as far-fetched as you might think.

When will the Apple Watch Series 8 be released?

We expect the Apple Watch Series 8 to come out in September 2022.

Apple’s smartwatches didn’t used to be as predictable as its iPhones, but the company now seems to be settling on September as the launch window for its Watches. You can see this from the last few iterations:

With an October announcement, the Apple Watch Series 7 is the only device to buck this particular trend of recent years. But 2021 was an unusual year in a number of ways; we suspect that semi-conductor shortages and COVID-related distribution disruptions played a part in the delay, and both should (hopefully) be less of a factor in 2022.

Regardless of the precise month – and we’d still bet heavily on September – you should certainly expect the Series 8 to make its debut in the autumn of 2022.

How much will the Apple Watch Series 8 cost?

Those are the prices of the Apple Watch Series 7 (2021), and very similar to what they were with the previous two generations too, so it looks reasonably sure that Apple will stick at those sweet spots for its new models. There are also rumours of a new, larger model (which we discuss below), so that would add another price tag into the equation, although we have no details yet about what that might be.

If you want to get a bargain, then you’d do well to bookmark our best Apple Watch deals guide, as it’s updated regularly with all the latest discounts on the whole range.

Early rumours from analyst Ross Young suggest that Apple could be about to introduce an additional size option with the Series 8. He tweeted that, alongside the traditional 41mm and 45mm models, we shouldn’t be surprised if there’s a third size in 2022.

Don’t be surprised if there are 3 sizes next year…

With the Series 7 increasing the display size on offer, within the same frame, it would suggest that a larger model would need a bigger chassis to accommodate a more spacious panel. Could this make room for additional features and sensors? This would make sense in terms of new capabilities, but would it also usher in a Pro version of the Watch? Intriguing.

Maybe this could be achieved by leaving behind the classic frame of the Watch that has been around pretty much since the beginning and moving to a flatter, squarer design, as suggested by tech leaker Jon Prosser and concept artist Ian Zelbo.

Prosser claims that the origin of this new look was from when “sources sent me a mixture of images as well as CAD files for this new design”. He then handed these over to Ian Zelbo to work his magic, resulting in a rather fetching potential facelift for the Watch line. 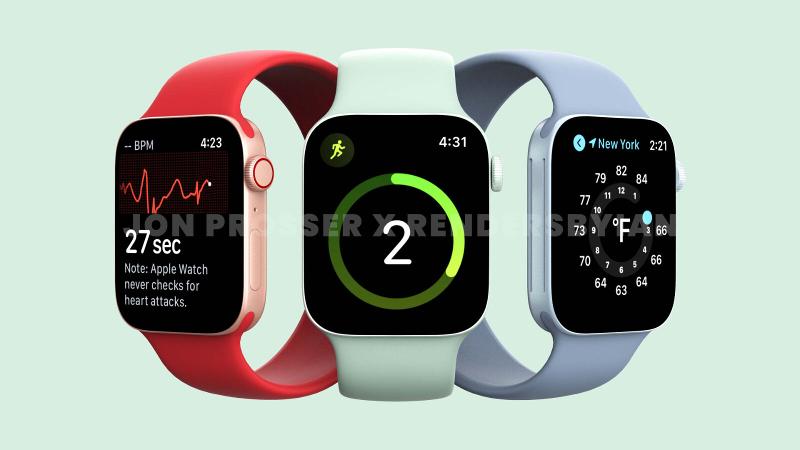 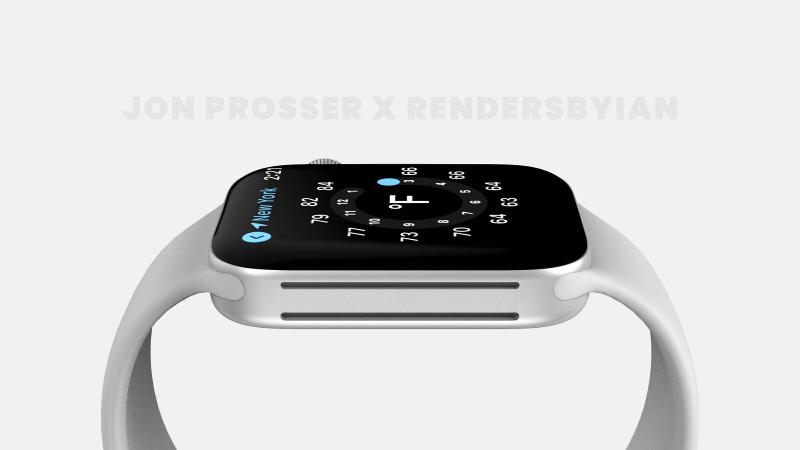 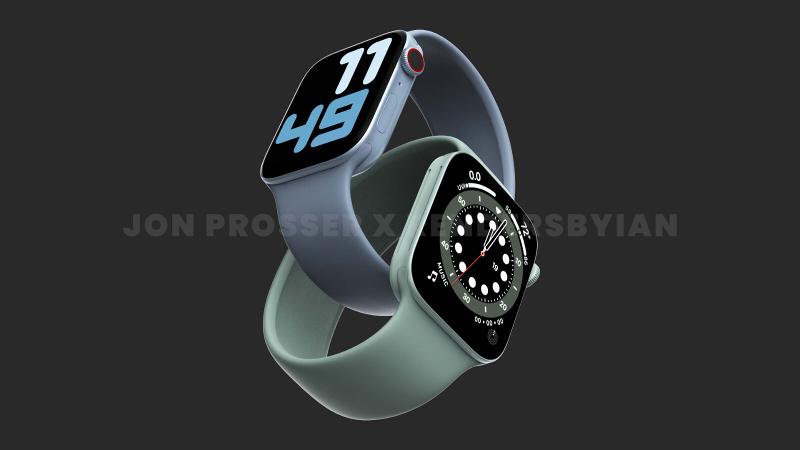 This fits in with previous rumours from noted industry analyst Ming Chi-Kuo and Bloomberg reporter Mark Gurman who both stated that new Apple Watch designs were on their way. Most predicted the update in the Series 7 release, but it could be that they were all seeing details pertaining to the Series 8 instead.

This is a perennial design rumour, because it’s easy for pundits to imagine their favourite device in a different colour. The issue for Apple is deciding which colour finishes will actually sell.

So remain sceptical when we show you some concept illustrations posted on Instagram by the account Appledsign. These show the Apple Watch Series 7 ‘as it could have been’ – with a different and bolder set of colours – and look pretty great. Whether Apple will take heed in time for the launch of the Series 8 is a different matter.

Obviously, with the Apple Watch Series 8 still some way off, there’s little in the way of confirmed new features that we know will appear in the next generation. But with so many previous rumoured upgrades ones not making it into the Series 7, there are some that could finally appear when Apple revamps the catalogue.

Compared to some other smartwatches, the Apple Watch can be a little wanting in the battery-life stakes.

There were rumours that this would be addressed in the Series 7, but there wasn’t really much to get excited about. Of course, if Apple is redesigning the chassis (as mentioned above) then there could be room for a more capacious battery.

Move to a Mini-LED display?

Another way to boost longevity in the battery is to move from the current OLED display to the much-rumoured Mini-LED and Micro-LED alternatives. To be fair, this has been reported for new iPads and MacBook Pros for a little while, but hardly any have yet to receive the new technology. The 12.9in iPad Pro did get a Mini-LED panel, which shows that Apple is beginning the transition, and we expect the new MacBook Pros to also feature Mini-LED panels.

Moving forward, it’s possible that the smallest displays in the Apple line-up could be one of the first to adopt the new Mini-LED panels or even be the beneficiaries of Micro-LED displays when the technology can be perfected. It could be too soon in terms of cost and production, but this would be a significant new feature if it did come to fruition.

It wouldn’t be an Apple Watch rumour roundup without some kind of health-related new feature. Apple has decidedly placed the Watch at the centre of its healthy-lifestyle world and if current rumours are to be believed then we may finally see the arrival of a blood sugar sensor. Apple has already submitted patents for measuring blood glucose including ones with non-invasive tetrahertz (THz) electromagnetic radiation, which would no doubt be a real blessing for diabetics who currently need to use needles multiple times a day.

If you can’t wait for the arrival of the Apple Watch Series 8 (2022) then be sure to take a look at our Apple Watch buying guide to ensure you pick up the model that’s best for you.

And don’t pay over the odds! To find the lowest possible prices, check our in-depth guide to the best Apple Watch deals.