During Monday’s Apple event, we saw the official demise of the one thing you could describe as a real-life Mac touchscreen: the Touch Bar. And with it died the dreams of millions of Mac fans who hoped to one day swipe and tap their way through the macOS interface.

Apple was oddly straightforward about its elimination (just as pre-event rumours predicted) of the controversial touchscreen strip from the top of the MacBook Pro‘s keyboard. The company didn’t beat around the bush: on the contrary, it bluntly stated that the Touch Bar was gone, acting as if it has no problem at all acknowledging a failure.

But where did it all go wrong for Apple’s touchscreen ambitions?

Let’s rewind to the mid-2010s, a time when PC makers were churning out multitudes of hybrid PCs, with more or less innovative solutions for how screens and keyboards could be swung up and down, back and forth. Most of them had touchscreens. Some even had touch pens.

Soon, eager analysts and anxious shareholders began to wonder when Apple’s touchscreen Mac would be launched. With all the PC makers jumping on the bandwagon, how could Apple miss this trend?

At the same time, however, Apple was clear that it saw several problems with touchscreens on the Mac. Ergonomics was one: it’s simply uncomfortable, the company argued, to hold your arm up to a screen on the other side of the keyboard. And Apple seemed reluctant to develop any kind of flexible iPad/Mac hybrid.

Another problem is the Mac’s operating system. The interactive elements, buttons and all, are made for a pointer, not an index finger. We just weren’t destined to see a Mac with a touchscreen, at least not in the way most people imagined. 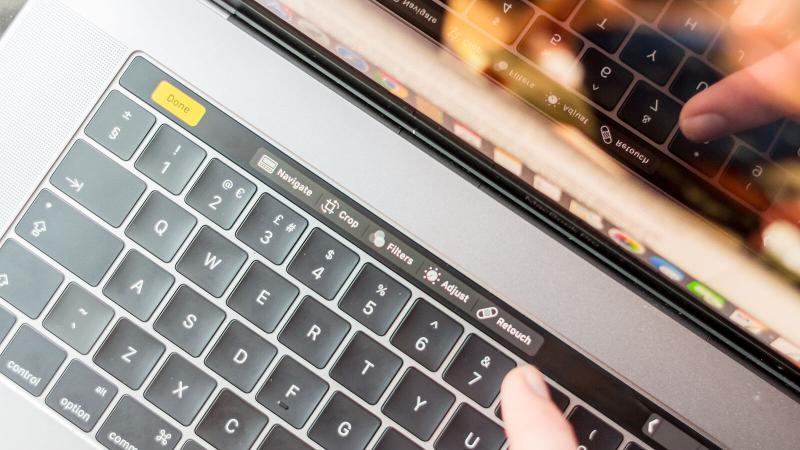 A different kind of touchscreen Mac

Fast-forward to 2016, and a touchscreen Mac did arrive. Sort of.

The “screen”, in fact, sat directly on the keyboard and was more of a narrow pressure-sensitive strip than a full-scale display. But the Touch Bar was heralded as an innovation and showcased with everything from DJs running a set to people playing games and editing photos, all on that little strip.

The benefit of the Touch Bar was that we could perform more tasks without moving our hands from the keyboard to the mouse. Some applications used the surface to display smart shortcuts, which were otherwise hidden in submenus.

One of several problems, however, was that the Touch Bar also hid some of the most commonly used physical keys, namely the function keys we use to control brightness and volume.

In addition, a touchscreen interface isn’t tactile in the way that physical keys are. Our eyes have to move from the main screen, where all the content is, down to the little strip to see that we’re pressing correctly.

Some users learned to like the Touch Bar and found real uses for it. Other applications, such as Better Touch Tool, tried to make the best of the invention when Apple seemingly gave up on it after only a few years.

The Touch Bar became merely a brief chapter in Apple’s history, and never caught on the way the mouse and trackpad did. It’s now gone from every Apple product except the MacBook Pro with M1. Will it be missed? Perhaps not.

And with the death of the Touch Bar, we can also safely say that it’s time to stop dreaming about a touchscreen (a proper full-size touchscreen) on the Mac. Apple tried Touch Bar, but it didn’t last. There’s no reason to expect any more attempts to crack the touchscreen formula.

Apple has just launched a brand-new generation of MacBook Pros with some pretty dramatic design changes, and without a touchscreen. If Apple had wanted to put a touchscreen in the Mac, it would have done so by now. But it didn’t.

For those who want an Apple device with a touchscreen, there’s always the iPad. But on the Mac, it’s cursor and keyboard, not finger and touchscreen. Apple has made that clear.

For sure, you should never say never. But if we’re talking realistically about the future, it’s clear: the dream of the touchscreen Mac died with the birth of the new MacBook Pro.