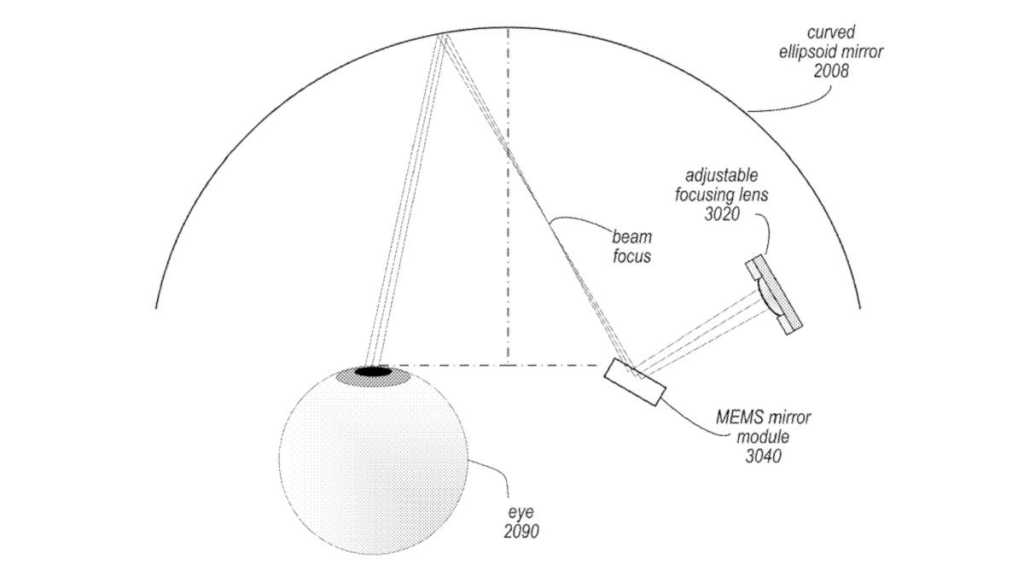 Whenever we talk about Apple’s rumoured AR and VR projects, discussion tends to revolve around screen quality: when a device is going to be positioned a few centimetres from the eye, clarity and resolution need to be absolutely top-tier. But the latest patent news suggests that Apple is considering a method of removing screens from the equation altogether.

The newly awarded patent, headlined Direct retinal projector and spotted by AppleInsider, describes technology that would be used to beam images directly on to the user’s retina. It includes a gaze-tracking system, which it uses to ensure that the beamed image is aimed correctly.

“In embodiments of a direct retinal projector system for AR and/or VR applications as described herein,” the patent reads, “a light beam is generated by a scanning projector, reflected off a curved mirror in front of the subject’s eye and through the subject’s pupil, and forms an image on the subject’s retina – there is no intermediate image on a screen or surface that the subject views.”

It’s unclear at this point how Apple plans to use the technology; obviously we don’t know for sure that it will appear in the AR glasses that are expected to be branded as Apple Glass. But aside from the fact that the company is known to be obsessed with AR and VR – mentioning them at almost every opportunity – the patent explicitly references that application at numerous points.

Specifically, it says the tech is designed to address problems with AR/VR products that cause headaches.

“Conventional virtual reality and augmented reality systems may suffer from accommodation-convergence mismatch problems that cause eyestrain, headaches, and/or nausea,” reads the patent.

It may even help with short-sightedness, the patent adds.

As ever, when discussing patent activity, we have to counsel caution. Patents do not always lead to shipped products: the project may later hit practical difficulties or management may go off the idea. Some patents are filed to mislead rivals about a company’s strategic direction of travel. And even if patents do produce concrete results, there is no saying how long this will take.

But for all the scepticism that we are duty-bound to direct on this revelation, it’s still an exciting idea.