A year has passed since we saw the first Apple Silicon processor, the M1 chip that appeared in the late-2020 MacBook Air and MacBook Pro models. All of a sudden the Mac had an iPhone processor (admittedly one that had been substantially beefed up), and performance was terrific. Things had turned out fine.

Rumours of Apple’s move from Intel to homegrown mobile processors go back years. In fact, when the iPhone 5s arrived in 2013 with the first 64-bit processor, there was speculation that it might soon be time for an ARM Mac. In the end it took another seven years before this dream became a reality, but looking back the transition from Intel to ARM-based Apple processors seems perfectly natural.

And the future of Apple Silicon looks bright. Just a year after its launch, Apple has introduced powerful chips in some of its most important and high-end Macs.

These are almost surprisingly competent chips, ones which aren’t downsized or hampered in any important sense. They allow for 64GB of RAM and an almost uncountable number of graphics cores, while providing strong battery life for the MacBook Pro range.

But they’re not the best in every way.

Initial Geekbench 5 tests of Intel’s new Alder Lake chips show that the 16-core Core i9-12900K is around 1.5 times as fast as the M1 Pro and M1 Max at multi-threaded tasks. While the Core i9-12900K is a desktop chip, the comparison to the M1 Pro/Max is still relevant as Apple is expected to use the same chip in the upcoming iMac Pro.

The big difference, however, is how much better Apple’s chips are at saving electrons. Intel processors require up to 241W at maximum performance. Apple’s chips don’t need even half of that. 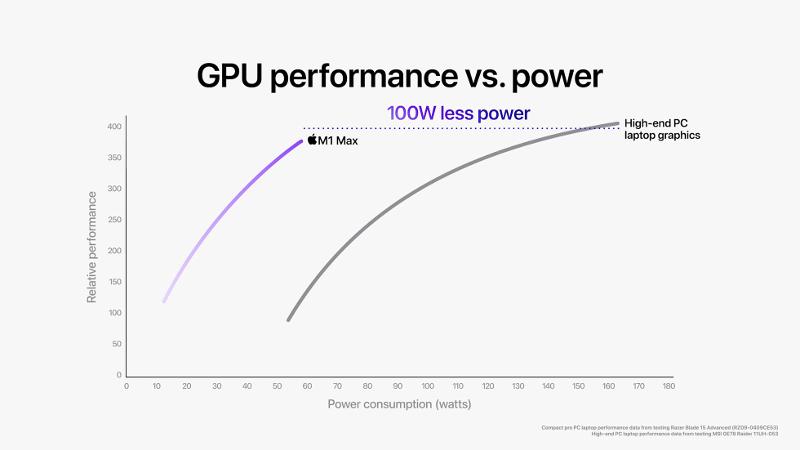 At the announcement of the new MacBook Pro, Apple itself admitted that the Pro is not always the fastest, at least when it comes to GPU performance. But Intel-based machines achieve their performance at a significantly higher energy cost. Image courtesy of Apple.

There are faster processors than Apple’s. But a lot of the time it doesn’t matter, because Apple can do almost as much as Intel at a dramatically lower power draw – in other words, achieving exactly what’s important in a laptop.

In fact, this very thing – the relationship between performance and power efficiency – was a key factor in Apple’s switch from Motorola’s Power PC to Intel in the mid-2000s. Intel was able to deliver higher performance at lower power consumption than Motorola. Now, in turn, Intel has been overtaken by the ARM architecture, TSMC and Apple’s own chip design.

This relationship will determine the success of Apple’s future products.

Apple is believed to have a set of AR glasses in the works. If that’s true, Apple Silicon will influence how successful and useful these glasses will actually be.

High performance is required to draw virtual environments of your surroundings, but a pair of glasses cannot have a large battery hanging from the side. Efficiency is extremely important here.

So far, the development of Apple Silicon has proceeded at breakneck speed. Meanwhile, Intel is struggling to get below a 10-nanometre process.

We don’t know what the future holds for either Apple or Intel, but we do know that developments can move quickly. If Intel doesn’t pick up the pace considerably, we may soon have reason to return to Steve Jobs’ classic cars vs truck analogy (which he used back in 2010 to explain the future of the PC and the tablet).

This time it could be Intel that becomes the truck: a maker of big, heavy, clunky processors, capable of shovelling huge amounts of data when needed at a high power draw. Apple, on the other hand, could be the car: less powerful in raw terms, but more efficient and a better choice for more people. One that sells in far greater numbers than Intel’s ‘truck’.

So far, Apple’s Silicon has been nothing but a success. Now we wait for the processors to find their way into entirely new product categories.