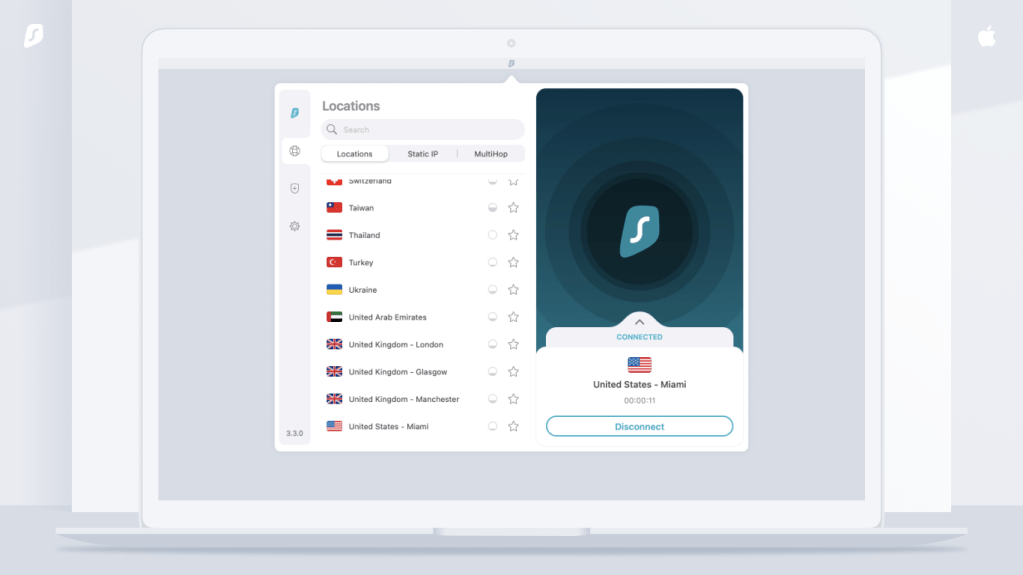 For all the benefits of the online world, each one of us is taking a risk every time we turn to our devices. Your internet activity is freely available to the likes of your internet service provider (ISP), the government or companies looking to target you with ads. It’s especially perilous each time you enter personal data, with sophisticated cybercriminals desperate to steal the information and use it against you.

However, all is not lost. Investing in an effective and reliable VPN (virtual private network) before you start surfing the web is a great way to safeguard your experience. It encrypts the connection between your device and a server on the internet, meaning you can choose when and where to provide your personal data.

Surfshark is one of the very best VPNs around, and now is a great time to subscribe. A 24-month plan will currently cost you just £54.11/US$59.76, while the company is throwing in an extra three months at no extra cost. That works out at only £2.00/US$2.21 per month, extraordinarily good value when you consider everything you’re getting.

Alongside core functionality such as fast speeds and over 3200 servers, Surfshark has some genuinely useful features you won’t find elsewhere. Among them is the Cookie pop-up blockers, which does exactly what the name suggests – stopping those annoying cookie consent pop-ups every time you visit a new website that must comply with GDPR regulations. This works in tandem with CleanWeb, another Surfshark exclusive, which blocks ads and malware before they can appear on-screen and disrupt your browsing experience.

Surfshark is also one of the only major providers to offer unlimited devices and simultaneous connections. You might think five or six is enough, but you’ll probably want to use Surfshark on every device you own. It’s also easy to share one account with everyone in the family, especially with Surfshark’s excellent device support.

Alongside dedicated apps for the iPhone, iPad, Mac and Apple TV, it works on Windows, Linux, PlayStation, Xbox and a wide range of smart TVs. There are also browser extensions for Chrome and Firefox, while the service can even be added directly to your router.

Whichever device you install Surfshark on, its security credentials are clear. AV-Test gave the VPN its official seal of approval in 2019, while its server infrastructure passed an independent audit in May 2021. The company’s strict no-logs policy was independently audited back in 2018, with another currently in-progress.

However, Surfshark is just as effective when it comes to a VPN’s other common purpose – unblocking geo-restricted content. It’s common knowledge that the content library on Netflix and Prime Video varies between countries, while BBC iPlayer can’t officially be accessed from outside the UK. Surfshark overcomes these hurdles with ease, allowing you to access the full range of films and TV shows from wherever you are.

Surfshark speeds have also improved significantly recently, thanks to the introduction of the WireGuard protocol. It can hit levels that far exceed what you’ll get from most home broadband connections (Wi-Fi or Ethernet), while connecting to a server has only a minor impact on your usual speeds.

There are plenty of other great Surfshark features worth talking about. Whitelister allows you to choose specific apps which use the VPN, while a kill switch can disable your internet access whenever the connection drops – perfect if you’re using public Wi-Fi.

The latter can work in tandem with Multihop, which routes your connection through two different VPN servers for an extra layer of security. But you don’t have to use a different IP address every time you connect to the same server – StaticIP allows you to keep the same one each time.

Surfshark is an excellent VPN in its own right, but becomes even more powerful when you combine it with the additional benefits of a Surfshark One subscription. This gets you capable antivirus software for all your devices, alongside a search tool focused on protecting your privacy and alerts for personal data leaks. Access to all four services for 27 months will cost you just £90.40/US$108.86 – that’s just £3.35/US$4.03 per month.

Whether you opt for Surfshark One or not, you’ll still benefit from an 82% saving on the usual asking price of the VPN. This makes Surfshark the best value for money VPN you can buy right now, whether you own lots of Apple devices or prefer other platforms.

Head to the Surfshark website to take advantage of this great price now, where you’ll also find the option to bundle the VPN with a Surfshark One subscription.