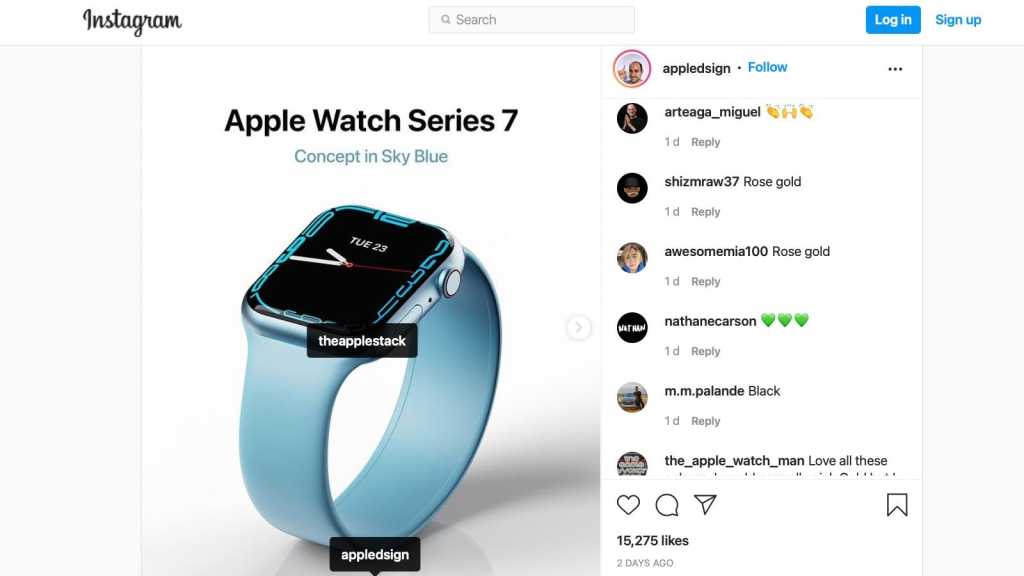 The Apple Watch Series 7 is available in a selection of colours, but a new concept design shows that Apple could have done better.

When Apple introduced Apple Watch Series 7, there were various things that were a disappointment to users: there was the “old” design, rather than the angular look predicted by many, plus many buyers found that the colours of the aluminium models did not look quite as magnificent in reality as Apple presented on its website.

The colour “midnight”, for example, has a clear blue cast on the website, on the wrist you can see less to nothing of it. The colour “polar star”, which reminds us of the colour of champagne on the website, is also not quite as strong in reality.

On Instagram, the account “Appledsign” has now published Series 7 concept designs that show how these Watches could have looked if Apple had done better:

Both the blue and the green hues are much brighter than the current shades. The pink and gold colour cast of the Apple Watch also looks very good.

Perhaps Apple’s market research has shown that too bright colours do not go down so well with buyers. However, we think that Apple would at least have provided another reason to buy. Because the current colours differ only minimally from those of Series 6 – with the exception of course to the new green (and aside from the larger display) the Apple Watch Series 7 has few advantages over Series 6. It’s a pity that this is just a concept, we would have liked to have taken a closer look at the golden aluminum watch.

However, there is one limitation: In Photoshop, a hue is changed quickly, which does not mean that it can also be achieved when anodizing aluminum.