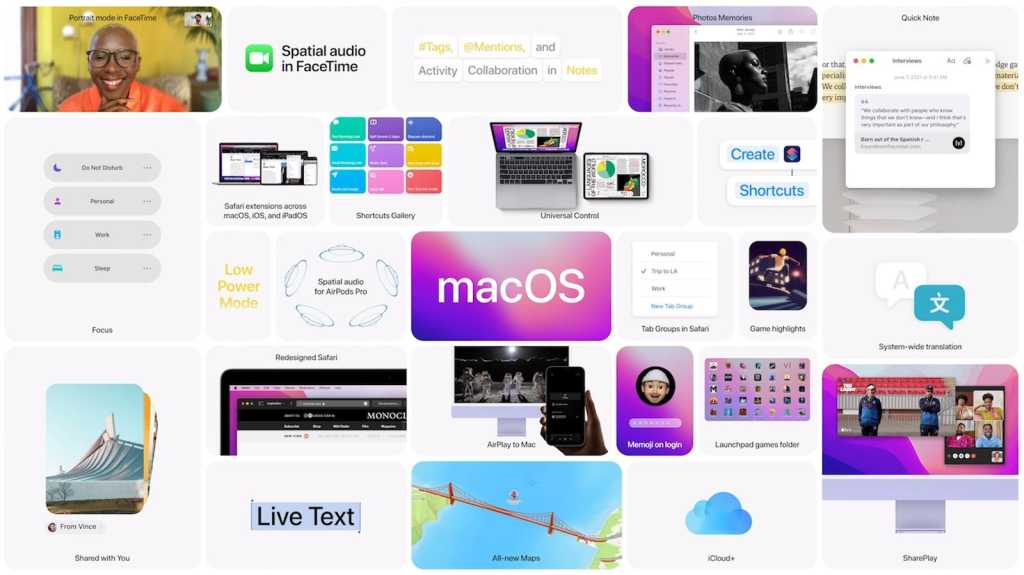 Apple introduced macOS Monterey back in October 2021, but as usual the company continues to improve and add to the Mac operating system. Currently Apple is working on the macOS 12.2 update, which was is starting to appear as a system updates on Macs as of 26 January 2022.

Few new features were expected from macOS Monterey 12.2 other than a significant update to the Music app. Unfortunately it appears that Universal Control, which Apple had promised for Monterey, still isn’t ready for release.

There is one issue that users were hoping that Apple will address in macOS 12.2 – a Safari 15 bug is known to be leaking details of the tabs you have open and your Google Accounts. Apple’s Safari team was known to be working on a solution and it does appear that a fix will has arrived in macOS 12.2. More about this below.

Unfortunately it sounds like macOS 12.2 has introduced an issue, with users reporting Bluetooth related battery drain, details below.

Unfortunately there have been reports that users are seeing their MacBook battery levels drop following the update. This appears to be related to a Bluetooth issue in macOS 12.2.

You can update your Mac to Monterey 12.2 by going to System Preferences > Software Update.

Download the software and then install. You will need to restart your Mac.

Apple will now start work on macOS 12.3, if you’d like to join in with the testing, read our guide showing how to join an Apple beta programme. As usual, however, be sure to back up your devices before installing the new beta versions; that way you won’t have to risk losing your files.

We explain how to get the macOS beta and how to install macOS Monterey and subsequent updates in a separate article.

When Apple announced its plans for macOS 12 Monterey it included various features that haven’t yet made it into the final version yet. The macOS 12.1 update brought some of the previously announced features that didn’t initially make it into Monterey to Mac users, including SharePlay, which arrived in macOS 12.1.

Some more of these missing features could make their way into the next version of Monterey, however those hoping for Universal Control will be disappointed, that’s still not ready for prime time.

During the beta testing it emerged that Apple was working on a new Apple Music app that is native and offers faster search and scrolling.

The update to Apple Music will please those who were disappointed when, in macOS Catalina, iTunes was replaced by the Music application with a greatly simplified interface. Some of the program’s shortcomings were quickly rectified, but other things have still not been fixed.

One problem what existed in both iTunes and Music is the fact that content from Apple Music is displayed as web content – this means, among other things, that searches are slow.

In the beta version of macOS 12.2, the entire user interface is developed in AppKit, the framework used in traditional Mac applications. The content that comes from the web will use Apple’s modern jet framework, which is used in the TV app among other things. (If you want to get a taste of how much quicker Music will be, you can compare a search in Music to one in TV.)

Music already uses AppKit for the interfaces that concern your own library, so there will be no improvements there in the new version.

Apple has also fixed some bugs in the new update to Monterey. These include:

Apple has addressed a potentially serious privacy breach bug in Safari 15 that could leak Mac, iPhone and iPad users’ browser activity and make personal information associated with their Google accounts visible to others.

FingerprintJS discovered the vulnerability. The issue relates to the way that a website’s database is saved to a new tab. Because most websites use a database name that is easily identified other sites that are open in tabs can effectively see that you have it open.

The situation is worse if you are signed into a Google account because that links to a specific user – you – so if you have a site that is exploiting the bug open in Safari then the websites that are open can be linked to you.

“The fact that database names leak across different origins is an obvious privacy violation,” explains FingerprintJS. “It lets arbitrary websites learn what websites the user visits in different tabs or windows.”

Apple apparently has known about the issue since November 2021. A Github entry indicates that the Webkit project is working on an update for Safari that fixes the described bug. Safari will probably be updated with one of the next updates for iPad OS 15, iOS 15 and macOS Monterey.

For more information about Monterey read: Monterey vs Big Sur – should you update?