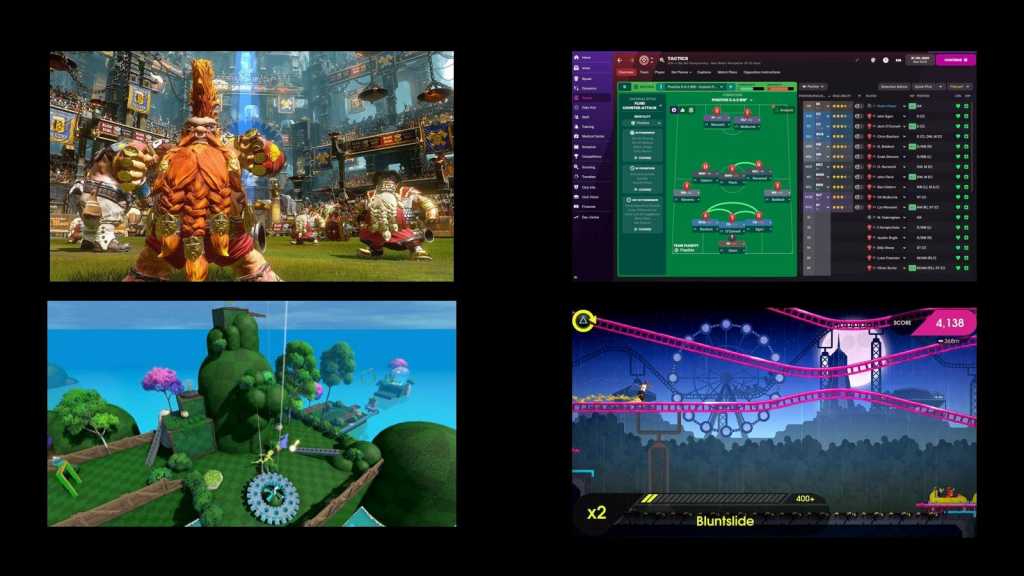 There are lots of great sports-themed games you can play on your Mac, here are our top choices.

We also have eleven separate articles covering our favorites in each game genre. So if you want more of the same, select your favorite genre from the list below and jump to that article.

The original Blood Bowl didn’t appear on the Mac (it appeared on iPad), but it took the monstrous races of the Warhammer games – ogres, orcs and other fantasy standards – and dropped them on to the field of an American football game. This sequel is really just more of the same, although it upgrades the game’s graphics considerably – which might be a problem for owners of Macs that don’t have a decent graphics card.

We don’t understand English football, let alone the US version, but Blood Bowl 2 kicks off with a (not-so) friendly match that acts as an introduction to the game. Once you’ve got the hang of the basics you can continue the single-player game by taking charge of the Reikland Reavers in a series of matches against computer-controlled teams.

These matches play out rather like traditional turn-based strategy games, allowing you to click on individual players and then move them around the pitch. But, as it’s a Warhammer game, you also have options such as the ability to ‘blitz’ an opponent, taking them out in the most violent manner possible.

This single-player mode is fun, and a good way to get to know the game, but the real attraction for many people will be the various multiplayer options, including the ability to set up your own online league, with teams that gain experience and power as they win matches. 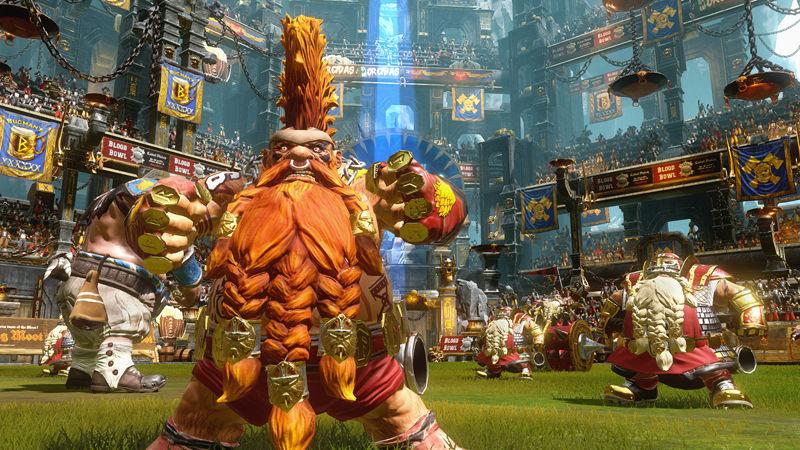 Who’d want to be a football manager these days, when billionaire owners can hire and fire at the drop of a hat? Fortunately, the Football Manager series doesn’t worry too much about that, and this year’s update very much concentrates on putting armchair managers even more firmly in control of their teams than in previous years.

A key feature of Football Manager 2022 is its new data hub, which provides in-depth analysis of your team’s performance throughout each match. A series of Key Findings provides a quick summary and key data such as successful passes and long shots, but if you’re a real data hound you can drill right down and view graphs that illustrate both team and individual performance.

You have better communication with your support team too, via a new weekly Staff Meeting. This includes reports from your assistant manager, scouts and coaching staff. Your staff can also make suggestions, which you can accept, or delay, or even pass over to the rest of the staff to ask for a second opinion.

There’s a new animation engine that more closely follows the physical ‘skeleton’ of the players on screen, creating the appearance of smoother movement. Even the ball itself benefits from a new ‘dribbling system’ – which sounds a bit gross, but produces more accurate and realistic movements as players try to change the direction of the ball when passing. As well as improving the appearance of the graphics, this opens up new tactical possibilities, allowing the game to now accurately depict a wider range of dribbling movements, such as the famous Cruyff Turn, for the first time. 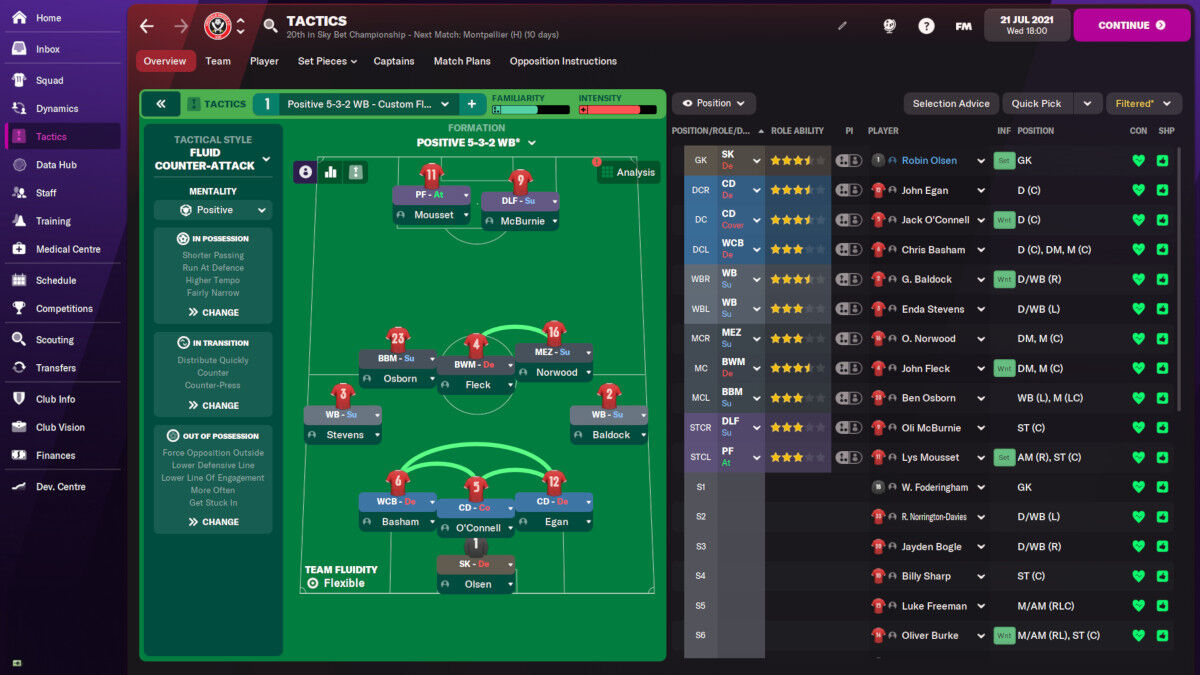 The developers of Mage Drops say that in the midst of the worldwide pandemic, they wanted this mash-up of golf and platform games to provide a soothing alternative to the high-speed stress of most traditional platformers. It’s basically a kind of souped-up crazy golf, where a series of moving platforms, traps and magical power-ups turn the simple task of dropping the ball into the hole into a series of challenging, three-dimensional puzzles.

The game is spread across eight different ‘worlds’, with settings such as a magical forest, an eerie underground cave and a mechanical world full of grinding cogs and electrical traps. You can play in either ‘challenge’ or ‘chill’ modes to adjust the difficulty, and you can also turn off the scoring system, which allows you to concentrate on solving the golfing puzzles, without worrying about trying to get under par.

The controls are fairly simple, allowing you to use either a game controller or keyboard. There’s a little bit of magic thrown in as well, giving you the ability to finesse the movement of the ball as it flies through the air, or rolls too close to the edge of a moving platform.

A little camera frustration can creep in from time to time, as it can sometimes be difficult to get a clear view of the route to the final hole. But for the most part, Mage Drops has the soothing calmness of games such as Monument Valley. It’s currently still in its Early Access stage on Steam, but seems pretty polished already, and if you’re wary of spending money on an Early Access game then there’s a demo available that lets you try out the first ‘qualifier’ level for free. 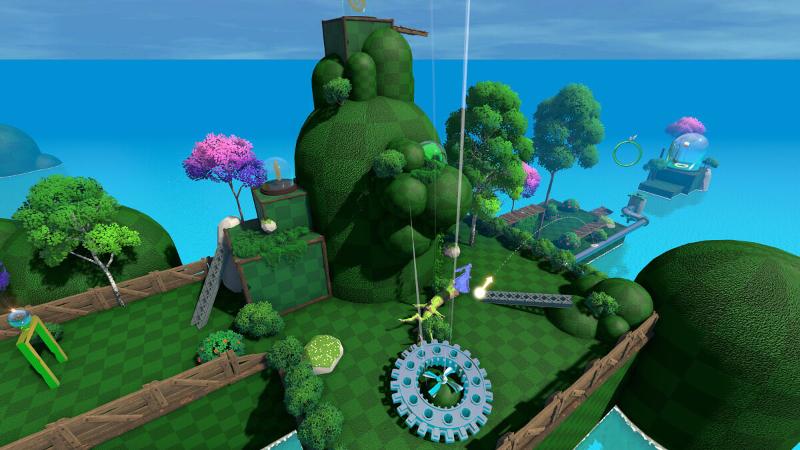 This is one for the kids. Developed by UK-based Roll7, OlliOlli2 is a skateboarding game that was originally released on the PlayStation and the handheld PS Vita, so you need to know the difference between your manuals, reverts and grinds if you’re going to get anywhere. It’d also help if you have a gamepad to control your moves – you can play with a keyboard, but the complex jumps and flips that you have to master will work better with a proper gamepad.

OlliOlli2 doesn’t have the slick 3D graphics of other skateboarding games, such as the never-ending Tony Hawk series, and its side-scrolling 2D graphics look pretty dated at first. In fact, the game looks a lot like an old-fashioned platform game, with lots of ledges, ramps and other obstacles that you have to get past in order to complete each level. And, of course, there’s the added difficulty of mastering the various jumps, flips and skateboarding combos that you need in order to rack up a high score.

Fortunately, there’s a handy tutorial for old-timers like us, which introduces a few basic jumps and tricks before throwing you in at the deep end. The single-player game includes 50 levels, divided into Amateur and Pro difficulties, along with a challenging Rad Mode that will really test your skateboard skills. You can also invite some friends around to play the split-screen Combo Rush mode, which lets up to four people play together on the same computer. 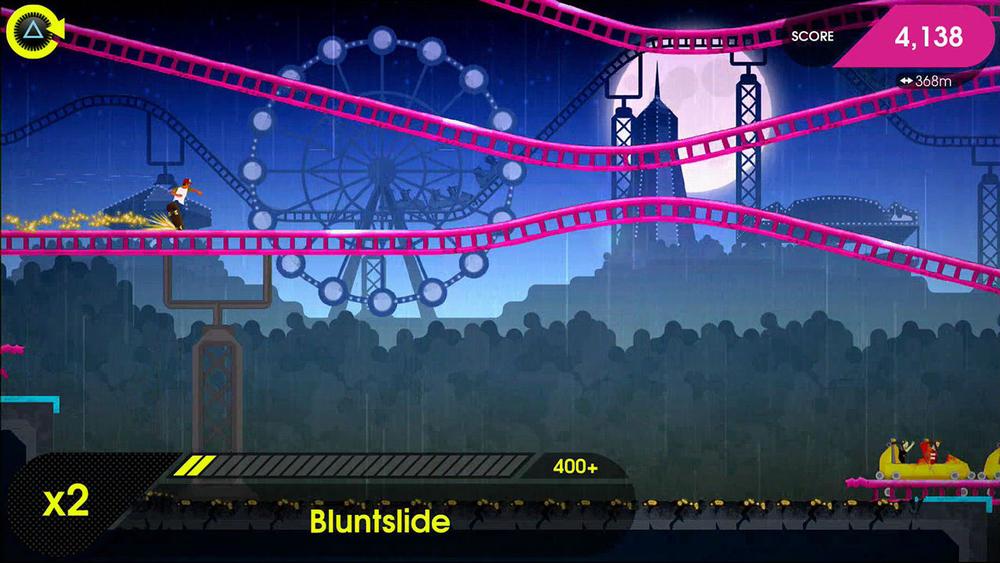