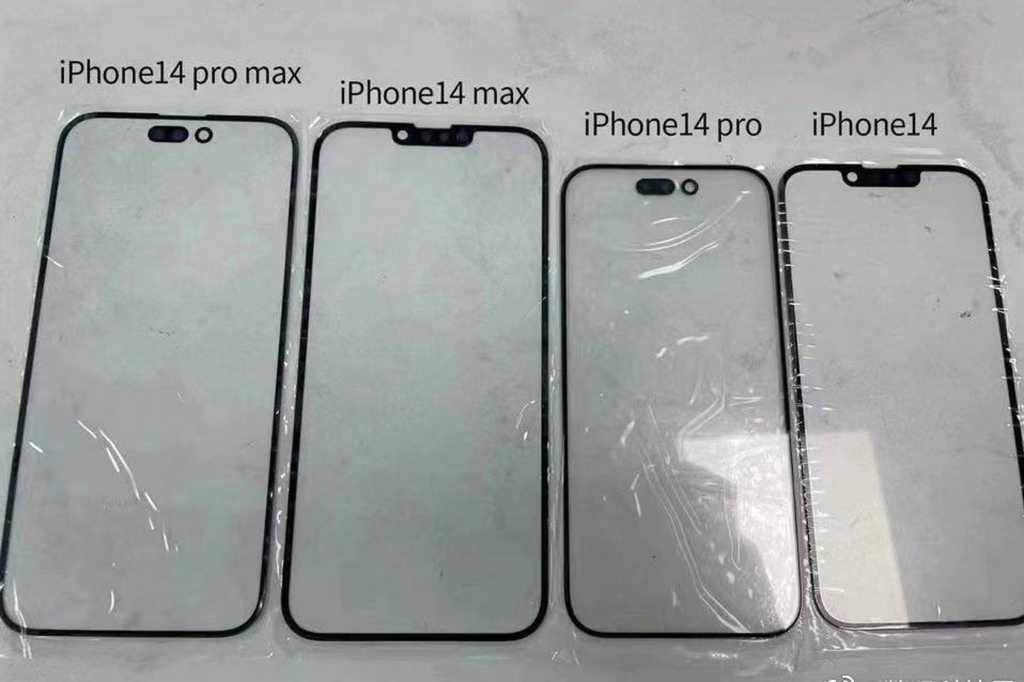 We’ve heard and written a lot about how the iPhone 14 Pro will use a hole+pill design in contrast to the iPhone 14’s notch, but all we’ve had to go on so far are educated guesses about how it will actually look. Now we have what appears to be our first real-world look at the displays.

As you can see in the picture above (via Weibo), the iPhone 14 lineup will indeed be divided into two regular and two Pro models each with the same screen sizes, 6.1-inch and 6.7-inch. The Pro models appear to be ever so slightly taller with ever so slightly slimmer bezels. They also have a smaller cutout for the receiver.

But by far the most interesting feature of the display panels is the placement of the sensors. On the iPhone 14, the TrueDepth camera is the same as it’s always been, with a hole for the selfie cam and a bundle of sensors next to it all housed in a notch. It appears to be the same size as the iPhone 13 or extremely similar.

The Pro models, on the other hand, are very different. As rumored, there’s no notch, but rather a hole for the selfie camera and a pill-shaped cutout for the TrueDepth sensors. It’s significantly smaller than the notch and allows for more of the screen to flow around the camera, but it doesn’t look like you’ll be gaining much in the way of useable space. The placement of the cutouts is rather deep and extends to the bottom of the notch on the non-Pro models, meaning vertical space won’t be gained.

But without a notch, the iPhone will feel a lot bigger. And you can bet that Apple’s renders will be gorgeous. With the screen flowing around the sensors, the iPhone 14 Pro and iPhone 14 Pro Max will be more immersive than ever, and will look like a completely different phone from the non-Pro models.