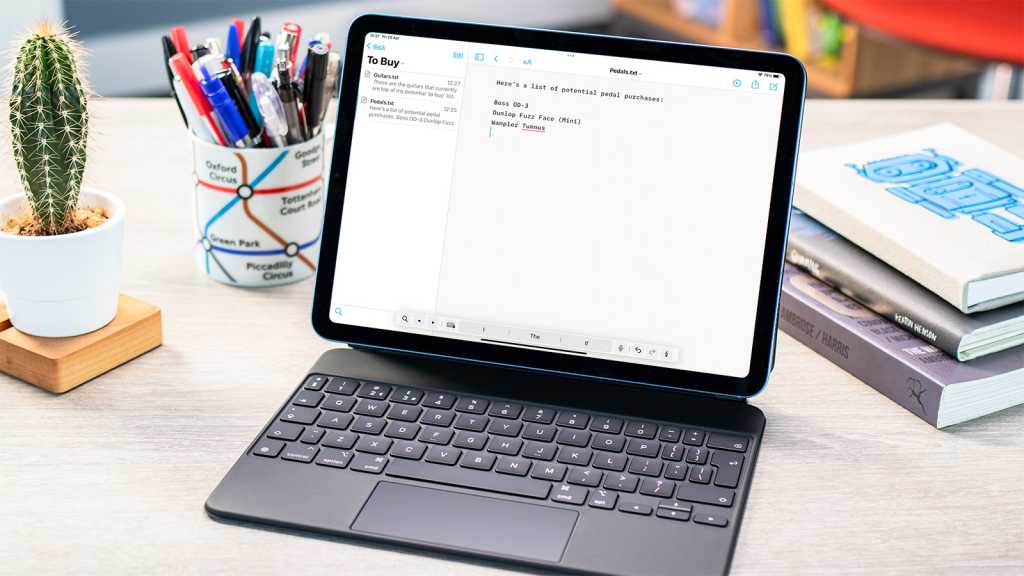 For many years people have used the free TextEdit app on their Macs to quickly create plain text files. Apple for some reason has never brought this useful program to its mobile devices, so it can be something of a challenge to edit existing files from your Mac when on your iPhone or iPad. There are some options available though, including third-party apps and switching to another Apple offering. Here’s how to edit TextEdit files on iPad.

Is TextEdit available on iPad?

Those who enjoy using TextEdit on a Mac because of its simplicity will be disappointed to learn that Apple does not make a version of TextEdit for iPad. While nearly every Mac app seems to have made its way from the Mac to the iPad or iPhone, TextEdit seems to be one that Apple just hasn’t felt deserved the move. We suspect that this is because Apple feels Notes to be a better option for making quick documents that can be synced across both devices. But following an email from a reader about this issue we realise that there are people looking for a solution so that they can edit TextEdit files on an iPad.

How to edit TextEdit files on an iPad

If you don’t have a mass of legacy documents, and are not particularly fussed about keeping your files in their original folders, there are plenty of alternatives for amending TextEdit files on iPad.

The most obvious alternative is Apple’s own Pages, which is free and can not only edit simple text files, but is also a fully-featured word processor that can create complex documents.

Don’t forget Apple’s Notes either, as this is essentially a replacement for TextEdit and it’s available on every Mac, iPad and iPhone. It gives you the ability to create notes, format them, store the files in nested folders, and of course sync them across your Mac, iPad and iPhone via iCloud.

Simplenote is another favourite, as the free app lets you quickly get your thoughts down in a note, then syncs them across all your devices.

Going through the App Store you’ll find a wealth of text editing apps, all with subtly different areas of focus, so take some time to peruse the selection and see which one is right for your needs.

To get the most out of your iPad, be sure to also take a look at our roundups of the best productivity and organisation apps and best note taking apps for iPad.

How to edit TextEdit files without moving them from iCloud

If you’ve been using TextEdit for a while, you may already have a large folder full of .txt files that you don’t want to move or import into another app. This can be tricky, as iPadOS usually prefers to have files stored in folders linked to certain apps. So, for example, if you open a TextEdit file in Pages, then the system will save the file in the Pages folder.

It isn’t easy to avoid this, as that just seems to be the way iPadOS does things at the moment. This situation is changing though, with some apps now supporting the Open-In-Place feature that can leave your files where they are, while allowing you to edit them.

We haven’t found a free solution at the time of writing, but one excellent app that can achieve the goal outlined above is iA Writer ($29.99/£25.99).

Once you have iA Writer installed, in the left hand column you’ll see the Locations section. Although it has iCloud already there, you’ll need to add the TextEdit folder from iCloud Drive to make the files accessible. Here’s how:

1.Tap the Edit button at the top of the column.

4. You should now see TextEdit as an option in the Locations section

To edit the file in question:

Now, any changes you make should also appear in the version on your Mac, all without creating duplicates or moving the files.

You can buy iA Writer in the App Store for $29.99/£25.99 and alongside the TextEdit capabilities there are also plenty of other features such as a Focus mode that greys out completed sentences and paragraphs so you can concentrate on the one you’re working on, there’s a syntax checker to improve your writing, a dark mode to save your eyes, plus compatibility with various cloud services to sync your writing. It’s lightweight, simple, and is a great solution if you just want to get things written.