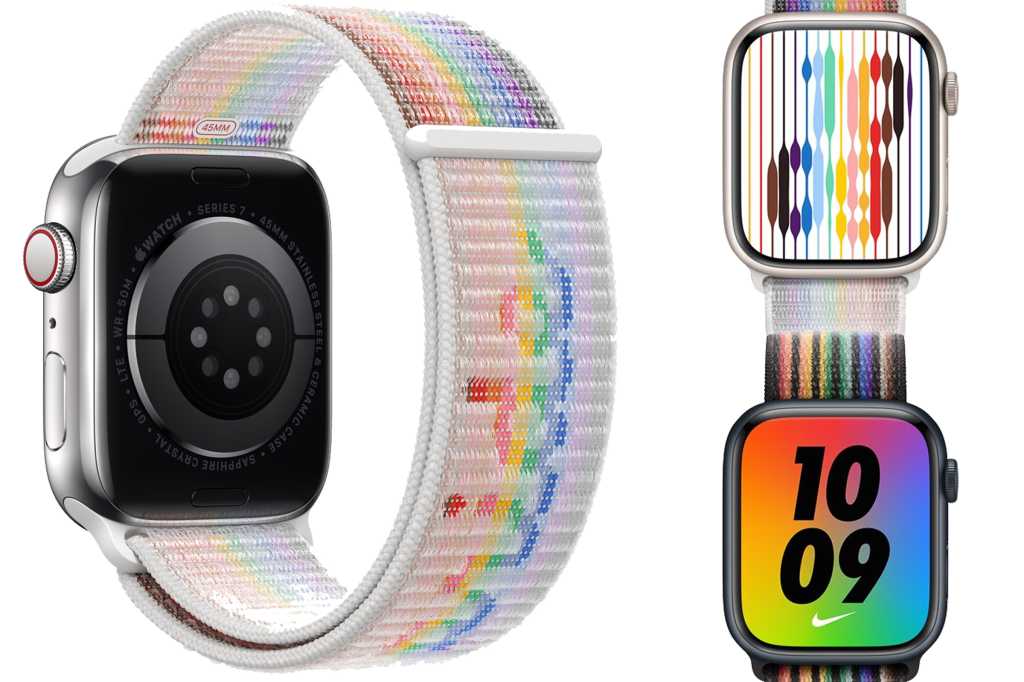 In an exclusive announcement in Out magazine, Apple has unveiled two new Apple Watch Sport Loop bands that celebrate the rainbow colors of the Progress flag and are available for purchase today at Apple.com.

The Apple Watch Pride Edition Sport Loop is a light band with colored stripes designed to showcase the colors of the Progress flag, including trans, Latinx, and Black people. It has the word “Pride” woven into the back of the strap in iMac “Hello”-style script using “a three-dimensional look, thanks to a new technique in which several layers of the nylon-woven textile loops were removed.”

Also launching is a Pride Edition Nike Sport Loop, which substitutes black for the white lines and doesn’t include the word “Pride.” The dark colors of the band “promote LGBTQ+ inclusion and equality in sports.”

The watch face includes “digital imagery [reflecting] the woven bands of the Sport Loop, which move when the wearer raises their wrist, taps the face, or rotates the Digital Crown.” It will be available on all Apple Watch Series 4 or later devices running watchOS 8.6.

Apple is also running a new Shot on iPhone Pride campaign that will “showcase imagery from an illustrious group of intersectional creatives, celebrating present-day queer pioneers in places of historic significance to the LGBTQ+ movement.” Apple began making Pride bands in 2016 for employees and started selling them in 2017.