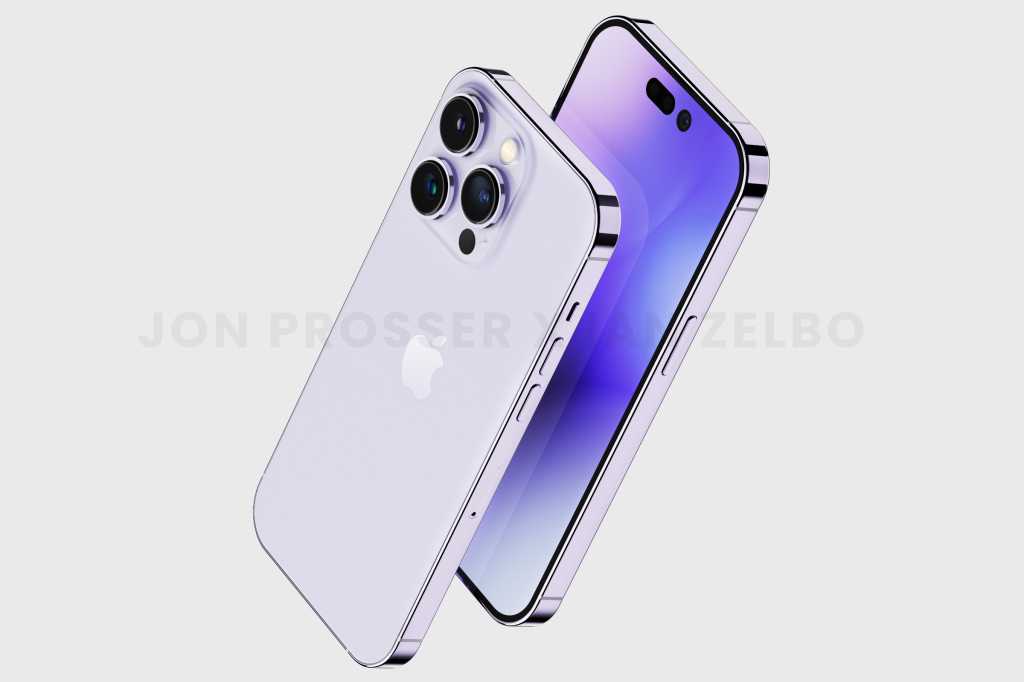 Front Page Tech, the divisive YouTube leaks show hosted by divisive leaker Jon Prosser, has released a series of render illustrations of the iPhone 14 Pro by Ian Zelbo. And they look stunning.

Technically there aren’t many surprises: most of the time that’s not what renders are about. This is simply an extremely professional visualisation of the current consensus of what the iPhone 14 Pro will look like: the same broad design language as on the 13 Pro, edge style, rear camera configuration and so on, but with hole + pill apertures replacing the notch, thinner bezels and a gorgeous new purple colour finish.

There’s a hefty camera bump on the rear of the rendered handset, but that too was expected: back in March Max Weinbach told his Twitter followers that the bump would protrude by 4.17mm, the biggest in Apple history. The company seems to have given up on the idea of a flush camera. Most owners put their iPhones in a case anyway, which makes this far less of an issue.

Returning to the hole + pill apertures, one of the more intriguing renders shows what’s going on under the glass. The left module is for Face ID, Prosser explains, and features the infrared camera, ambient light sensor, proximity sensor and dot projector. The front-facing camera sits in the hole punch opening on the right.

It’s important to stress, as ever, that these are render illustrations, or as Prosser puts it, “computer-generated images of a phone that’s not released yet.” They’re not photos, or official artwork, and shouldn’t be taken as 100% reliable. Although, to be fair, pretty much every reputable leaker and analyst agrees that the 14 Pro will look like this.

It’s also important to emphasise that these are renders of the iPhone 14 Pro, for the obvious reason that most of the interesting changes coming to the iPhone line-up this fall are Pro-only. The iPhone 14 and 14 Max–or in Prosser’s turn of phrase, “the iPhone 14 poor people models”–are likely to be a disappointment, both inside and out.

All four editions of the new iPhone are expected to make their debut in September, and you can keep up with the latest rumors with our iPhone 14 superguide. If you can’t wait that long, make sure you pay the lowest price for the current range with our regularly updated roundup of the best iPhone deals.