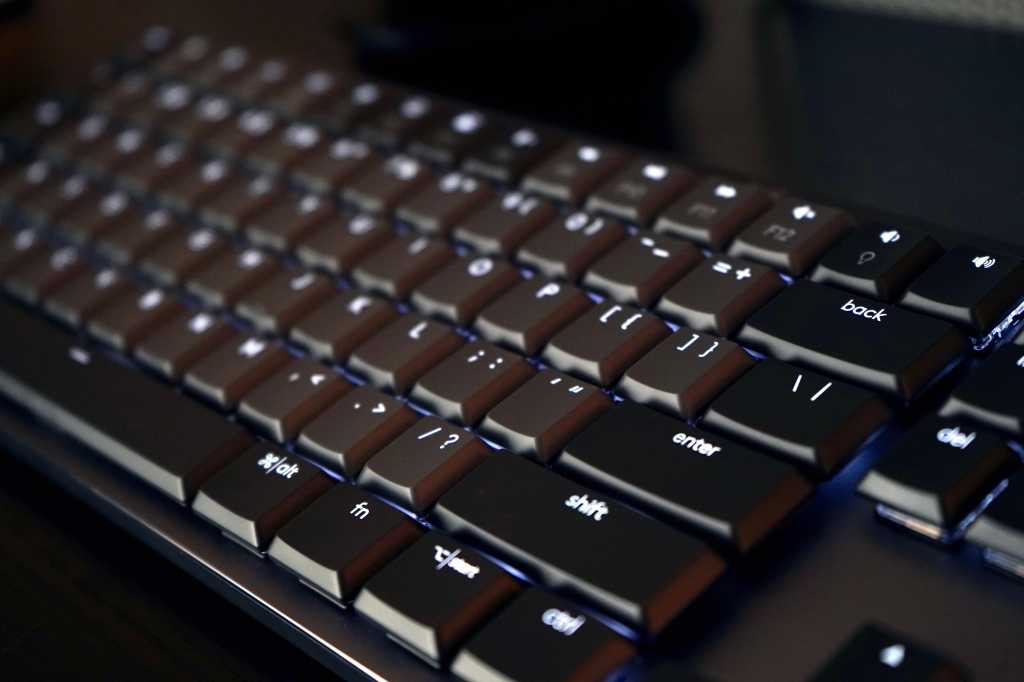 A great low-profile mechanical keyboard designed for office productivity rather than gaming. Connect to your Mac, PC, and iPad and switch between them with the touch of a button.

Logitech makes pretty good keyboards. They’re a staple of our best keyboard lists, whether its for Mac or iPad, because outside of Apple’s own keyboards it’s the safest bet. You’re almost always going to get something well-built with good key action and useful software features.

With the MX Mechanical, the company finally rectifies that. Available in a tenkeyless Mini ($149) and full-size ($169) variants, it combines the craftsmanship of the company’s mechanical gaming keyboards with its excellent productivity features and software. All in a more professional design that would be welcome in any office—home or away.

For those who love to type

Mechanical keyboards become a thing lately. Tired of the wobbly, low-travel keys on laptop-like keyboards (such as Apple’s Magic Keyboard), enthusiast users have flocked to good old clicky mechanical keys. Sure, they make more noise (even the quiet ones), but they feel so much better, with more spring and that excellent click feel when the key actuates. Gamers love them too, for their durability, faster response times, and more deliberate feel.

You can also replace the keycaps on many mechanical keyboards, personalizing your keyboard to look the way you want. Logitech uses Kailh’s new low-profile Choc V2 switches in the MX Mechanical, and it’s available in linear, tactile, and clicky variants. I tested the tactile (brown) switches, which I think do the best job of giving you that deliberate mechanical feel with a little less typing noise. The typing action is as good as you’d expect with a top-notch switch like this, with great response for a low-profile keyboard and minimal key wobble.

The Kailh Choc V2 uses the same round crosspoint stem as Cherry MX switches. This is probably the most popular stem design and it gives you the greatest options for aftermarket keycaps (Logitech does not make alternate keycap sets available). But be warned: Regular keycaps don’t work well on low-profile switches. They technically do work, but with the shorter key travel, they will slap into the keyboard deck all the time. Low-profile keycaps compatible with the Cherry MX stem are harder to find but should work fine on the MX Mechanical.

Made for work, not gaming

While you can of course use this keyboard when playing games, it is deliberately designed for office productivity.

That means no macro keys or macro programming in the bundled Options+ software, though I hope that’s coming in an update. The Fn keys have shortcuts keys inclding microphone mute, emoji, and dictation, along with staples like brightness, key brightness, and volume.

As with most keyboards these days, you can access normal Function keys by holding down the “fn” key. The MX Mechanical lets you lock this on by pressing fn and Esc, which will be welcome to programmers and others who find themselves wanting to press F8 a lot more often than muting their microphone.

Speaking of keys, they’re backlit in a single white color, which goes well with the two-tone graphite key deck (it’s not available in any other colors). There are seven levels and six different effects, so you can have a little fun, but not nearly as much as an RGB keyboard. Logitech has built the deck with a proximity sensor, so the backlight turns off when your hands leave the keyboard for 30 seconds and turn back on as soon as they get close again. An ambient light sensor adjusts the backlight brightness, too–dimmer when there’s not much light, and brighter when the sunlight streams in through your office window.

It’s all in service of longer battery life. Logitech says you can expect about 15 days of typical use with the backlight on and 10 months with the backlight off. I left the backlight on but set sort of low, and the battery only dropped from 100 percent to 85 percent after five days. When you need to recharge, there’s a lone USB-C port in the back right corner.

As with much of Logitech’s other MX gear, you can connect the MX Mechanical via either Bluetooth or Logitech’s own Bolt USB-A wireless dongle. A Bolt dongle can handle up to six compatible Logitech devices, so you only need to use one of your precious USB-A ports for multiple mice and keyboards.

The keyboard itself can pair with three different machines (Bolt or Bluetooth) and switch between them with dedicated keys. It’s the kind of thing multi-device users will appreciate. And yes, that includes serving as a Bluetooth keyboard for your iPad or iPhone, both of which work great. Switching between typing on my Mac and iPad with the tap of a key has been a joy.

Then there’s the Options+ software, which effectively replaces the old Logi Options Mac app. Options+ lets you reassign the functions of all the Fn keys, the Insert/Home block of keys, and the top keys of the number pad. There are both global and optional per-app settings for all of these, and they sync in the cloud if sign in to a Logitech account.

The software is intuitive, attractive, and useful (and it’s a Universal app, ready for your next Apple Silicon Mac), but somewhat limited compared to some of the functions you get in the G Hub software for the company’s gaming keyboards. Keyboard macros, in particular, would be a welcome addition.

Should you buy an MX Mechanical?

The MX Mechanical probably won’t satisfy the hobbyist that wants to fully customize their keyboard, but it’s not meant to. It’s meant to combine that great mechanical feel with the software features of Logitech’s existing MX Keys products while looking “office-ready,” and it does a great job.

It’s attractive, well-built, and has a great key feel. The battery lasts a long time, and the software to customize key functions is thoughtful and simple. It pairs with up to three devices (Mac, PC, Linux, even iPad or iPhone) via USB or the company’s Bolt USB-A wireless dongle, which it comes with.

Mechanical keyboards aren’t for everyone, but if you want a nice low-profile option with features tailored for productivity rather than gaming, you’d be hard-pressed to find a better solution.