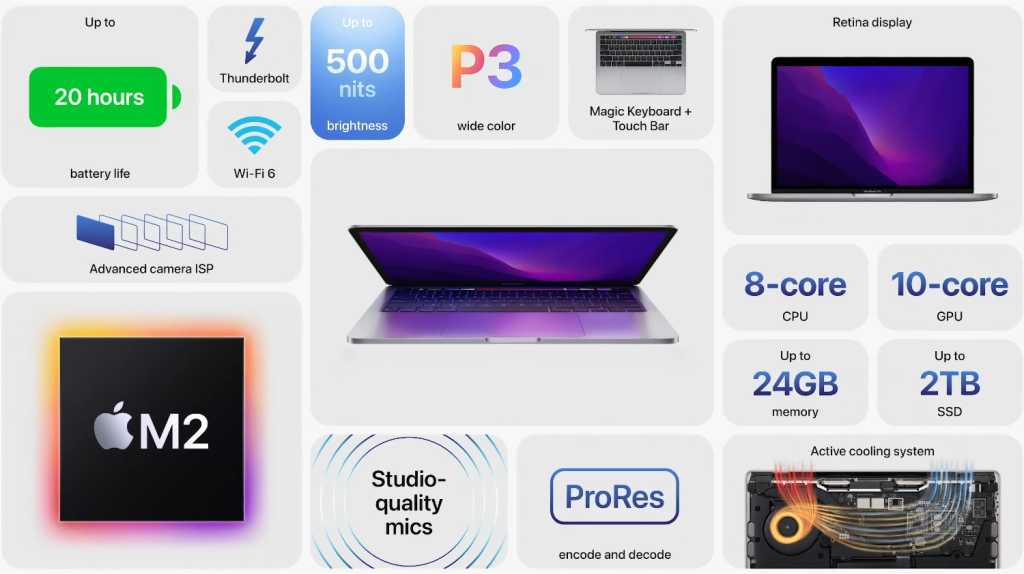 At its WWDC 2022 keynote on Monday, Apple revealed the new MacBook Air with a new chip, display, colors, and a completely new design. The MacBook Air M2 will be available for $1,199 beginning next month.

The M2 at the heart of the new MacBook Air features 8 CPU cores split evenly between performance and efficiency. According to Apple, the M2 has improvements that make it 18 percent faster than the M1. the base model starts with an 8-core GPU (one more core than the M1) and Apple will offer a model with a 10-core GPU for $1,499, which Apple said is 25 percent faster than the M1. It has the same battery life as the original M1 model, which offers up to 18 hours of use on a single charge.

The base configuration of the MacBook Air M2 comes with 8GB of memory, but the maximum is now 24GB, up from 16GB in the M1 MacBook Air. The storage starts with a 256GB SSD with upgrades to 2TB available.

Apple has also upgraded the display with a 13.6-inch Liquid Retina display, which is 0.3-inches bigger than the previous MacBook Air display thanks to skinnier bezels. The new display features 500 nits of brightness (versus 400 on the M1 Air) and support for billions of colors.

Apple redesigned the MacBook Air so that it follows the same style as the 14- and 16-inch MacBook Pro, so the tapered design is gone. The laptop is 11.3 millimeters thin and weighs 2.7 pounds and is available in four colors: silver, space gray, starlight, and midnight. There were rumors that the MacBook Air would come in an array of colors like the iMac, but those didn’t come to pass.

The MacBook Air even has a notch at the top of the display that houses a 1080p FaceTime camera along with four speakers placed between the display and the keyboard, and Apple outfits the laptop with three microphones.

Like the M1 MacBook Air, the new Air has two Thunderbolt/USB-4 ports but upgrades the audio jack that supports high-impedance headphones. Buyers of the 10-core GPU model will receive a 35W power adapter (available separately for $59) that has a pair of USB-C ports for charging two devices at once. Customers can also use a 67W power adapter for fast charging to charge the MacBook Air’s battery up to 50 percent in 30 minutes.

Apple also introduced a new 13-inch MacBook Pro with a chip upgrade to the M2 with the same design as the M1 model. That means the Touch Bar, which we thought was going away, will be around for a little longer. It includes the same audio jack upgrade as the MacBook Air as well as a 67W USB-C Power Adapter (versus 61W on the M1 model) though it doesn’t appear to support fast charging.

The new 13-inch MacBook Pro M2 starts at the same $1,299 and will be available next month.