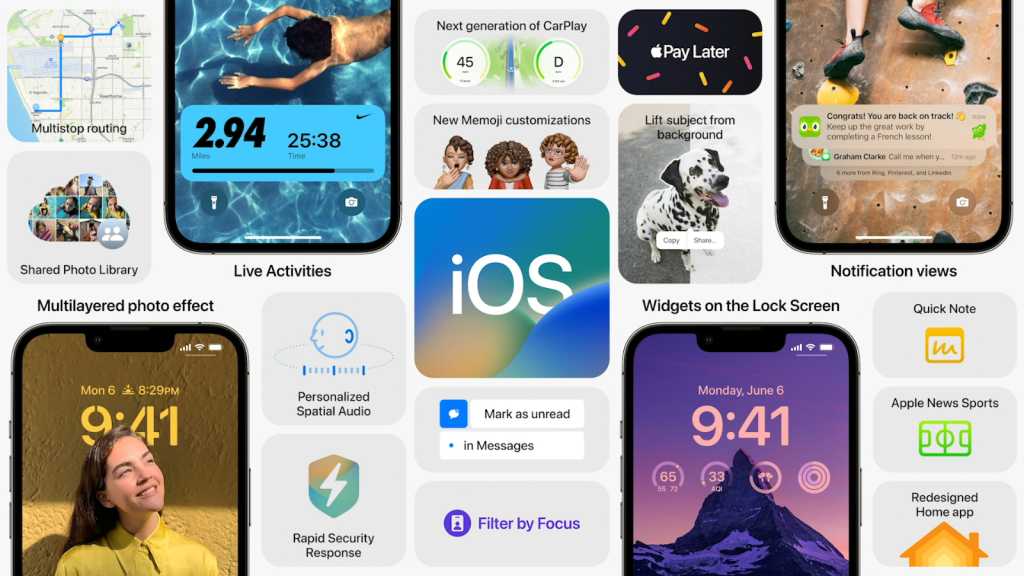 Apple has pulled back the covers on iOS 16, but is it that different to iOS 15?

At WWDC 2022, Apple has unveiled its latest version of the iPhone operating system: iOS 16. Here’s a quick look at how it compares to iOS 15, which it replaces, and the new features that should make it a serious upgrade.

While iOS 15 did a good job of smartening up the look and feel of the system, it still left the first screen you see a bit on the basic side. That’s changed now in iOS 16 thanks to the revamped Lock Screen.

With this feature you’re able to customise how the information appears on the screen. Photos can be placed in front of things like the time and date, making the aesthetic more 3D than before and certainly better than anything you’re likely to find on Android at the moment. You can also select from various fonts and colour schemes to hone the images and text to your preferred look.

Aside from the classic time and date that you’d find on iOS 15, the new version will also allow you to add widgets such as a calendar to see upcoming appointments, Activity to see how close you are to closing your rings, and weather apps so you don’t get caught in the rain. These are based on the Apple Watch widgets and look impressive, from the limited time we’ve had to see them in action.

Building on the Focus feature introduced in iOS 15, you can also set up multiple Lock Screens which can be toggled between easily. These will then link to the Focus modes you have set up, so you can finish work of an evening, swipe to the Family Lock Screen and trigger all of your Family Focus settings at the same time. Nice.

Live updating widgets can also let you keep track of deliveries that are on the way, the latest score from the game or other useful information. Plus, when listening to music you can now have the full album artwork displayed on the Lock Screen above the playback controls.

iOS 15 started the big job of sorting out the notoriously overcomplicated notification system on iPhone, introducing the ability to mute conversations, have notifications delivered at preferred times, the addition of Contact photos to instantly recognise who is messaging you, plus the Notification Summary feature that bundles related alerts together and delivers them in the morning or evening or at another time you specify.

iOS 16 doesn’t change too much of this. We’ve already mentioned the ability to link the Lock Screen to your Focus settings, but in the new update you’ll also notice that the alerts slide up from the bottom of the screen so that the lovely image you’ve carefully selected isn’t always obscured by notification boxes.

Some of the most useful updates to appear in iOS 16 are found in the Messages app. First off, you’ll be able to edit messages that have already been sent, allowing you to quickly fix an embarrassing typo before the recipient gets the wrong idea. What if you shouldn’t have sent the message at all? You’ll now be able to delete it before the person sees the contents. Finally, you can mark a thread in your inbox as unread, so you can remember to look at it later.

iOS 15 introduced the Shared with You feature that would monitor your messages, then automatically place any content sent from friends–links to music, movie, interesting articles and so on–in the relevant app. So, if a mate shared a track from a new album, it would be in the Shared with You section of Apple Music when you next opened it.

In iOS 16, Apple has taken this further by bringing the SharePlay feature also introduced in iOS 15, which allows you and the friend to enjoy the content simultaneously, and making it available directly in Messages. This means you won’t have to open other apps to watch the movie or listen to the track with your friend. You’ll also be able to continue chatting while the content plays, all from a single app.

The Mail app can feel a bit of an unwanted stepchild at times, with third-party offerings usually boasting a far greater toolkit for managing your messages. iOS 15 introduced some privacy features that could hide your information from senders, such as location, online activities or even whether you’ve read the message. These were good additions but didn’t really beef up the lack of controls and capabilities within the app. iOS 16 addresses this with some new features that should close the gap on the competition.

Scheduled emails will now be available in Mail, so you can set up the important message to be sent at a specified time. Also, you’ll be alerted just before the message is sent, in case you want to change your mind and cancel it. You can now get an email you’ve received to go back to the top of your inbox after a specified time, which should prevent you forgetting about it if it arrives at a time when you’re busy.

Mail will also scan your messages to see if you’ve forgotten to include something important, such as an attachment, then warn you before the message is sent. Not to mention it will use its smarts to bring to your attention any important emails that you have yet to receive a response from and allow you to follow it up.

iOS 16 introduces a truly excellent feature that has been missing from Apple’s navigation app: multistep routing. With this you’ll be able to plan journeys with up to 15 different stops along the way, all without having to put any additional information into Maps. This is also linked to the Mac, so you can plan a holiday trip on your iMac or MacBook, then sync it with your iPhone and head out the door.

There are also new transit features that gives user the predicted cost of their journeys, and iOS 16 adds transit cards to Wallet which will then monitor the balances to remind you when you need to top up.

Keeping photo libraries organised can be a real pain, especially when lots of people want access. Now, in iOS 16, Apple has created a new single place where families (up to six people) can share photos and manage them together in iCloud Shared Photo Library. You’ll be able to select from existing photos in your libraries, as well as make use of a new toggle in the Camera app that will send the pictures straight to the library. Everyone in the group can add, delete, or edit the images, so it won’t be left up to you to manage the whole thing.

Arguably one of the most impressive additions in iOS 15 was Live Text. This is the feature where you can point your camera at some text (be it a menu or sign) in a foreign language and your iPhone will automatically translate. It also pulls text out of pictures so you can add it to Notes or call phone numbers that appear in the image. Now iOS 16 brings this to video too. Simply pause the recording on the text in question, then the software will be able to pull it out and translate or copy the words to the clipboard.

A sister feature to Live Text that appears in iOS 15 is Visual Look Up, which helps identify certain things, such as landmarks, art, flowers, and breeds of dogs, by pointing the iPhone camera at it. The image is then analysed, and the results presented via Siri.

iOS 16 adds more subjects, including birds, insects and statues, while also introducing a new feature where you can tap and hold on the subject matter then lift it out of the image. It’s like a Photoshop effect that enables you to then share the cut-out in messages, social media posts or what-have-you. We don’t really see the point, but it could be quite fun.

New Wallet features in the US

Customers in the US that want to spread payments of items across a few weeks can make use of the Apple Pay Later feature in iOS 16. This lets you order a product and then set up a six-week payment schedule to pay it off. Six weeks sounds a bit weird to us (surely most people are paid monthly?), but it’s intended to help people budget for purchases. You’ll also be able to track delivery of said items in the Wallet app too.

There’s also a new feature that can confirm your age without revealing your information to the supplier or bartender, plus the ability to share electronic keys for your car, hotel room, office and so on via Messages, Mail and other apps, with the security provided by Wallet.

Apple went pretty crazy with iOS 16, adding plenty of other features such as improvements to CarPlay, Dictation, Setting up accounts for children, Fitness, Home, accessibility and others. You can read more about them in our guide to the top new iOS 16 features.

It should build on the great features introduced in iOS 15, bringing some much needed additions to Mail, Messages, the Lock Screen and others. The public beta version will be available in July so you can test it out before the full release in September to accompany the new iPhone 14.

One thing to note: Apple states that iOS 16 will only be available to those with an iPhone 8 or later. So, if you’re not on that list, then maybe take a look at our roundup of the best iPhone deals to see if you can grab a bargain on an upgrade.