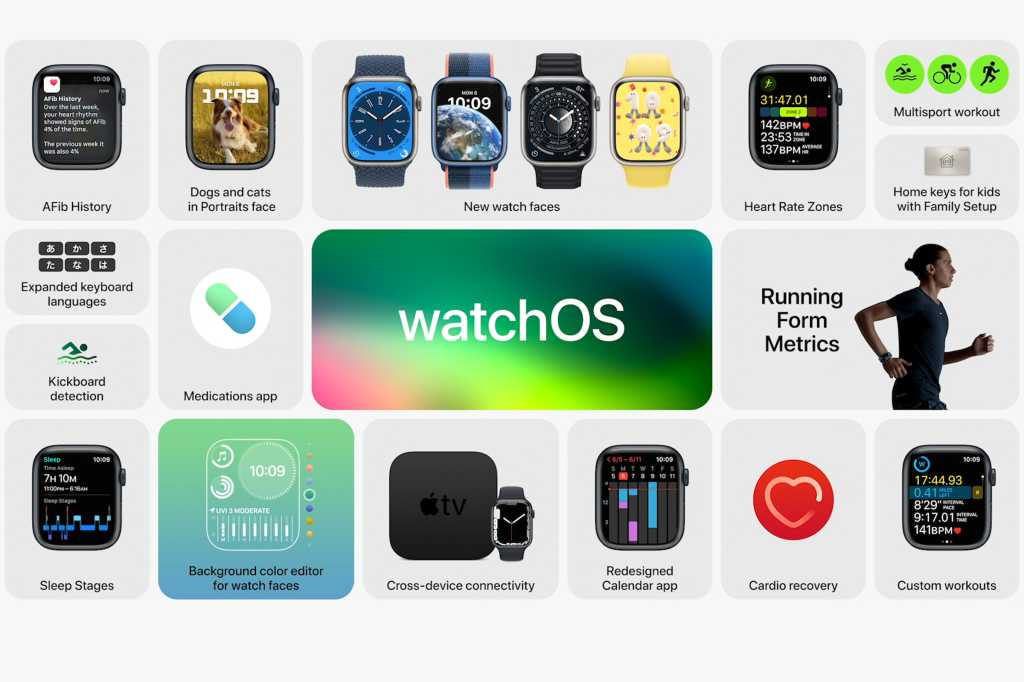 Apple has released watchOS 9, the latest version of the operating system for Apple Watch. It comes with new features designed to keep you healthier and more connected. Here’s how to install watchOS 9, followed by descriptions of the top features.

How to install watchOS 9

To install watchOS 9, you must have an Apple Watch Series 4 or later, along with an iPhone 8 or later or iPhone SE (2nd generation) or later, running iOS 16, which was also released on Monday. After updating your iPhone to iOS 16, you can upgrade your Apple Watch.

Before you install the update, you must place your Apple Watch on its charger. Also, the watch needs to be within range of your iPhone and connected to Wi-Fi. Then follow these steps in the Watch app on your iPhone:

It wouldn’t be a watchOS update without new watch faces. This year Apple has four new ones, including a “completely remastered” classic face. Here’s how Apple describes the new faces:

You’ll also get “enhanced and modernized” complications on many of Apple’s classic faces, including Utility, Simple, and Activity Analog, along with background color editing for Modular, Modular Compact, and X-Large for additional personalization. And the Portraits, Focus, and California faces have some new features, as well.

The new Low Power Mode helps extend your battery life by disabling some features, such as the always-on display (on watches that support it), heart health monitoring, and workout autostart. Other features, such as Fall Detection and Activity tracking, still work in Lower Power Mode. According to Apple, Low Power Mode can extend battery life by as much as twice what you get in regular mode.

Low Power Mode is different from the Power Reserve setting in the watchOS Battery preferences. Power Reserve disables just about everything and shows only the clock.

Workout is the go-to app for fitness enthusiasts and it’s getting a lot better in watchOS 9. The app will now provide richer metrics for measuring performance, as well as new training experiences. Users can also use the Digital Crown to cycle to cycle between Workout Views.

Custom Workouts and Heart Rate Zones will help athletes keep better track of their progress while new alerts for pace, power, heart rate, and cadence will give you a live picture of your metrics. Triathletes will also be able to use the new Multisport workout type that automatically switches between swimming, biking, and running using the Apple Watch’s sensors to recognize movement patterns.

Runners will also get more out of watchOS 9 with new running form metrics, including Stride Length, Ground Contact Time, and Vertical Oscillation, which can all be added as metrics on Workout Views. Finally, swimmers can now track their efficiency with a SWOLF score—stroke count combined with the time it takes to swim one length of the pool.

After bringing sleep tracking to watchOS 7, Apple has enhanced the system in watchOS 9 with the addition of sleep stages. Like Fitbit watches, Apple will use the accelerometer and heart rate sensor to determine when you’re in REM, Core, or Deep sleep. Users will then be able to view detailed information about the time and quality of their sleep with additional metrics including heart rate and respiratory rate, in sleep comparison charts in the Health app.

The Apple Watch has been able to detect possible signs of atrial fibrillation (AFib), but there hasn’t been a way to see your previous readings. In watchOS 9, there is. Apple Watch users who are diagnosed with AFib will be prompted to turn on the new FDA-cleared AFib History feature and access important information to provide deeper insights into their condition. Users will also be able to download a PDF with a detailed history of their AFib and lifestyle factors.

Apple is bringing a new Medications app in watchOS 9 to help users track and manage prescription medications, daily vitamins, and supplements. You’ll be able to create a medications list, and set up schedules and reminders in the Health app. Each medication will be able to have a custom schedule and users can receive alerts when there are potential issues with two or more medications used together.