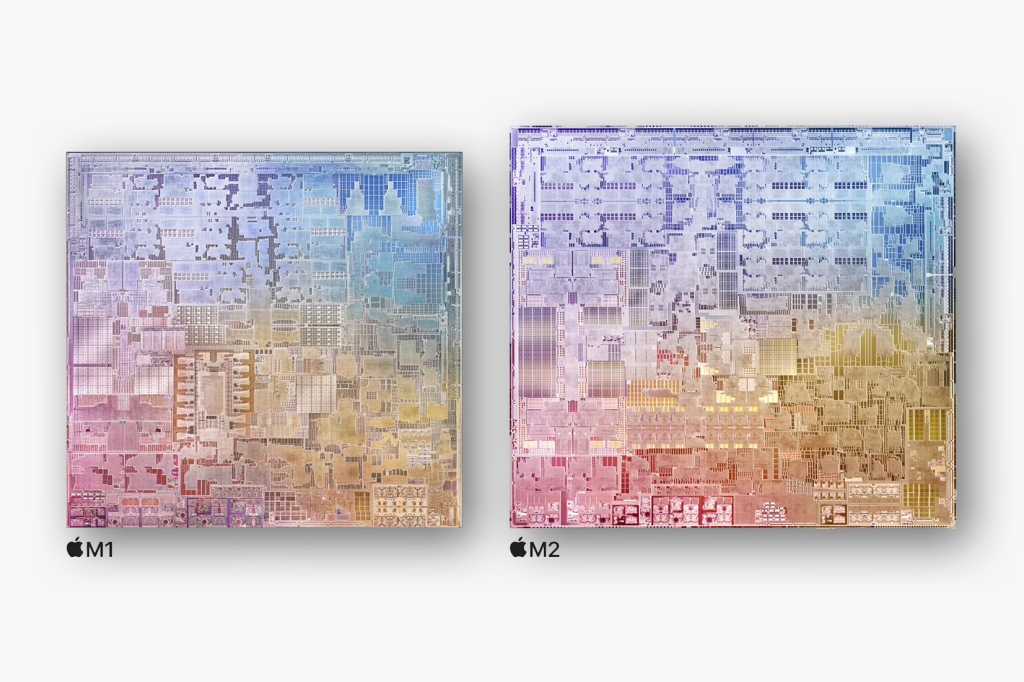 The M1 is a great chip. Essentially an “X” variant of the A14 chip, it takes the iPhone and iPad processor and doubles the high-performance CPU cores, GPU cores, and memory bandwidth. The M1 chip is so good it’s equally amazing for tablets and thin-and-light laptops as it is for desktops, easily outperforming any competing chip with similar power draw and offering similar performance to processors that use at least twice as much energy.

Now a year and a half later, and after delivering three more powerful variants of the M1 (M1 Pro, M1 Max, and M1 Ultra), it’s time for the next generation. Announced at WWDC and appearing first in the new MacBook Air and 13-inch MacBook Pro, the M2 is essentially the system-on-chip we predicted it would be: what the M1 is to the A14, the M2 is to the A15. It’s made of 20 billion transistors, 25 percent more than M1, and while it’s still built using a 5nm manufacturing process, it’s a new enhanced “second-generation” 5nm process.

Here are the most significant ways the M2 is improved over the M1.

Together, Apple says this gives the M2 an 18 percent greater total CPU performance than M1. This means you can likely expect Geekbench 5 CPU test results somewhere around 8,800-9,000. That’s essentially on par with a Ryzen 7 3800X desktop CPU at around 20 percent or less of its power consumption.

As a point of reference against the latest mobile low-power chips, Intel’s best current ultraportable CPU, the Core i7-1255U, scores just under 7,000 while using more than twice the power. There are definitely faster laptop processors available from both Intel and AMD, but they use dramatically more power and would be best compared against M2 Max or M2 Ultra, when they arrive.

The A15 made an interesting change from the A14 before it. The GPU core count increased from 4 to 5, but that 5th core is only enabled in the iPhone 13 Pro and Pro Max. The M2 doubles the GPU cores from the A15 (as the M1 did over the A14), and so it is available with up to 10 GPU cores. The entry-level MacBook Air, however, has only 8 GPU cores enabled.

Still, this looks like an extremely power-efficient GPU. Apple likes to make wild comparisons, such as saying it’s 2.3 times faster than the Intel Core i7-1255U at the same power level. We can’t help but notice that Apple didn’t compare its chip against an AMD’s ultraportable laptop chips, which are generally superior to Intel’s in that department.

In a way, it doesn’t matter. Graphics performance improvements are always welcome, but 3D graphics performance is one area where you would only compare against a Windows PC insofar as it affects content creation apps like Adobe Premiere. Comparing processors of different architectures is always dubious, and that goes double for trying to generalize “graphics performance” that could include GPU compute, real-time 3D rendering, and more.

It’s enough to say that the M2 has a 25 percent bigger GPU, and is about that much faster, just as the A15 is to the A14. You’re seeing a pattern here, right?

The memory subsystem is one area where the “M2 is to A15 as M1 is to A14” pattern does not hold true. The A14 and A15 have the same main memory subsystem specs: a 64-bit wide LPDDR4x interface. The M1 doubled that to 128 bits wide and stuck with LPDDR4x, for a peak of 68.25GB/s, the M2 makes the switch to LPDDR5x, which boosts memory bandwidth to 100GB/s.

In addition to the big boost in memory bandwidth, the M2 is available with up to 24GB of RAM. The M1 only offered 8GB and 16GB configurations, both of which are still available on the M2.

Though it wasn’t stated outright, we are willing to bet that the system-level cache (an on-chip cache that is accessible to every aspect of the chip) is 50 percent larger on the M2 as well. Apple increased the size of this cache from 16GB on the A14 to 32MB on the A15. The M1 featured 24MB of SLC, and it’s reasonable to expect that it has doubled to 48MB in the M2. We won’t be able to tell until the M2 MacBooks ship in July and can be thoroughly tested, but the SLC cache size is a big deal. It helps with everything, as it is accessible to the CPU, GPU, Neural Engine, media encoders, you name it.

M2 vs M1: Other improvements

Of course, Apple is quick to point out that the M2 is more than a CPU, GPU, and RAM. It’s a complete system-on-chip and includes important hardware acceleration blocks for the sorts of advanced features Apple keeps adding to macOS and iPadOS. The Neural Engine, while still 16 cores, can perform up to 15.8 trillion operations per second, more than 40 percent more than the 11 trillion operations of the Neural Engine in the M1. This is exactly like the leap from the A14 (11 trillion) to the A15 (15.8 trillion).

It’s quite possible that the media engine will be upgraded yet again in the A16 (perhaps with AV1 hardware acceleration) and that the M2 Pro, Max, and Ultra will get an upgrade to that version.

In all, it appears the M2 is a nice upgrade over the M1, though not revolutionary. It takes all the architectural improves we saw in the A15 and applies them to a thin-and-light laptop class chip in exactly the same way the M1 did for the A14. And given that later M1 processors (the M1 Pro, Max, and Ultra) gave us advancements like LPDDR5x memory and the newer media engine, it’s not a clean win across the board.

It will be interesting to watch Apple’s evolution to the inevitable M2 Pro, M2 Max, and M2 Ultra. We suspect they might be made using TSMC’s more advanced 3nm process technology, and could feature some improvements we find in the A16 later this year when the iPhone 14 Pro is announced–likely an improved media engine and perhaps a new Neural Engine, too. The M2 is a great start to Apple’s second generation of Apple Silicon for the Mac (and iPad Pro), but not surprisingly so.