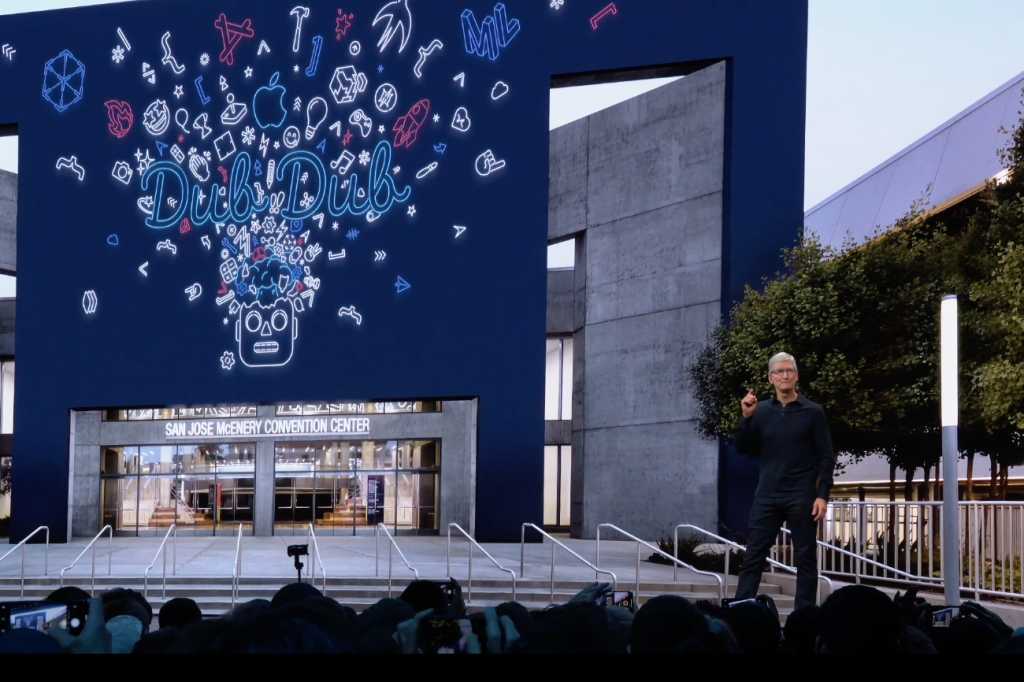 It pains me to admit this, but I’ve covered Apple’s Worldwide Developer Conference for more than a quarter of a century. I’ve seen it go from a sleepy conference in San Jose to an electrically charged event in San Francisco to a can’t-get-a-ticket event back in San Jose. And, like everyone else, I participated in WWDC remotely for the past two years via session videos posted on Apple’s developer site.

The lesson here is that WWDC is nothing if not changeable. Apple changes with the times, and so does its relationship with outside developers. But having spent a day on the Apple Park campus as a part of the company’s reimagined WWDC this year, I can say this: I don’t think we’re ever returning to the old WWDC, and I think that’s the right decision.

Before the pandemic, Apple always staged WWDC in a city at a public convention center rented out for the occasion. A few thousand developers would attend the event, which kicked off with a keynote address and broke down into individual sessions detailing technical information about Apple’s platforms. Because only a portion of the developer community could attend, Apple did supply videos of those sessions after the fact, first on physical media and then eventually via the internet.

But the arrival of the iPhone and the App Store changed how Apple interacted with its developers forever. WWDC became a hot ticket, and only a tiny fraction could be lucky enough (and have enough money) to attend. Session videos became more important. Apple says it now has 34 million registered developers. Even the largest venue imaginable couldn’t fit more than a tiny fraction of the total.

Due to Apple’s success, by 2019, WWDC as an in-person event had lost a lot of its relevance. It was a great party for those who got to participate in it, but there was a distinct sense that attendees were merely the studio audience, supplying applause and good imagery to a production meant to be consumed by the rest of the world.

The pandemic forced Apple to embrace a fully online event, and the results have been impressive. Unlike in-person sessions, in which presenters were chained to a lectern and forced to adhere to strict time slots, Apple’s online sessions could be as long as they needed and were more dynamically presented in bright, interesting rooms at Apple Park. Everything was on-demand, released in daily binge drops like the nerdiest Netflix show ever.

Apple even embraced the online community for WWDC. There are virtual tech talks and labs. Apple engineers are hanging out in the official WWDC 2022 Slack right now, answering questions for developers in real-time.

It worked too well. There’s really no going back when it comes to the education part of WWDC.

But here’s the thing: WWDC isn’t just about education and developer outreach. It’s also a media event, where Apple unveils its operating-system strategy for the next year–and, oh yeah, perhaps it’ll drop some new hardware announcements just for fun.

This is our house

With WWDC 2022, Apple has found a good mixture of the old and the new. It invited the media to the keynote, as it would have in the old days. It also invited a smaller (but still significant) number of developers to make noise and cheer while watching the keynote from Apple Park.

Apple is a secretive company, and you’d think that the prospect of inviting all those people onto its campus might be a non-starter. But Apple’s also a company that loves to control as many aspects of what it does as it can. I can’t believe the company ever enjoyed dealing with the cities of San Francisco and San Jose to use their convention facilities, buy up hotel blocks, pay for expensive and substandard catering, work around other convention dates, and the rest.

Apple Park is the answer. Apple Park is Apple’s own real estate, its facilities, its schedule, its food service, its parking lots, and even its security and crowd control. The company built a huge theater large enough to host any keynote event it might want to hold, and has multiple outdoor spaces that can serve large crowds. (That last one turned out to be useful in the case of a pesky ongoing pandemic that had made it a tougher sell to bring lots of people indoors.)

Opportunity of a lifetime

WWDC isn’t like other Apple events because it caters specifically to developers. (Except for that keynote, which is not really for them but for the general public.) While this year’s WWDC was very different from past years and had a dramatically reduced number of outside participants, the people who were lucky enough to get a ticket had the trip of a lifetime.

This year’s participants were among the first members of the general public to stand inside the ring building at Apple Park. (It was my first time at the big ring, and it is far more impressive than it looks from the pictures.) They got to sit on fancy wood chairs, eat at fancy wood tables, and climb fancy marble stairs. They were at the center of the Apple world–for real this time, not like when we used to say that downtown San Jose was the center of the Apple world during WWDC week.

Apple also used this week to unveil its new Developer Center building, located just south of the Apple Park Visitor Center. Equipped with meeting rooms and a small theater, it’s clear that Apple intends to have its Cupertino campus be a destination for developers for years to come.

I can’t say for sure what next year’s WWDC will bring, but I have a hard time imagining that it won’t be very much like this year’s model. The keynote will be a big media event–perhaps back in the Steve Jobs Theater?–and a small number of developers will get the chance to punch their lucky ticket and eat a sandwich from Caffe Macs.

Is that a less exciting prospect than thousands of people thronging the streets of San Jose? In a way, yes. But it’s the right approach for Apple, and for the 99.9999 percent of developers who will never make the trip.