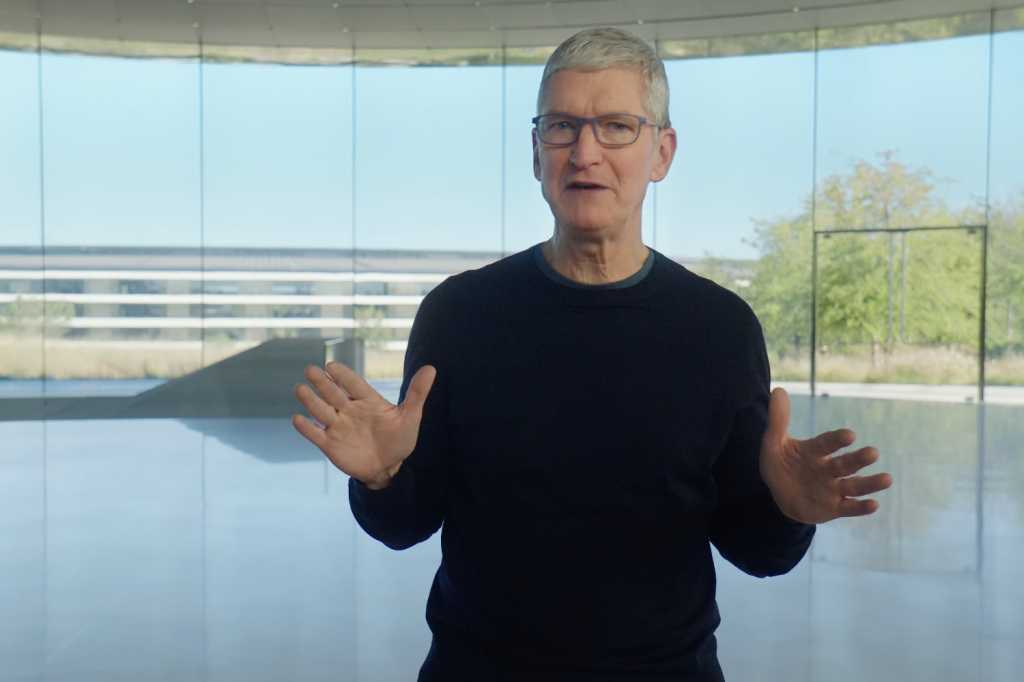 Inflation runs rampant. Threats of recession loom. And on Thursday Apple strolled right in, whistling a happy tune, turning in yet another record set of financial results. The company set a fiscal third-quarter revenue record, with $83 billion in receipts, up 2 percent from last year.

But look deeper, and you’ll see that this was an unusual quarter for Apple. The company was battered by a “cocktail of headwinds,” to quote Apple CFO Luca Maestri using a metaphor that wasn’t just mixed, but shaken and stirred. Mac sales were down, wearables took a beating, and even the seemingly invincible Services line showed some softness.

And yet, it was a pretty good quarter, considering. I realize that the word “considering” is doing a lot of work in that sentence, but it’s true. Wall Street seemed relieved that Apple turned in a good, if not great, quarter. Here’s what jumped out at me in the numbers (and in the post-game phone call Apple’s executives traditionally do with financial analysts).

Three months ago, Apple warned everyone that due to supply constraints, it would be unable to meet demand–to the tune of $4 to $8 billion in lost sales. But in the end, the final number was “slightly below” the $4 billion total, according to Apple CEO Tim Cook. So look on the bright side!

Cook said that most of the supply constraints last quarter were due to factory shutdowns in China due to COVID outbreaks. The Mac was especially hard hit since the affected factories included almost everywhere that Macs are assembled. (If you tried to buy a new Mac in the last three months and had to wait a while for your order to arrive, you may not be surprised by this.) Apple thinks that these constraints will ease in the coming months–though you never can tell with COVID!–but that an ongoing shortage of silicon parts will continue. All in all, Cook said, Apple should be less constrained in the coming quarter than it was in this last one.

And before we turn our attention to other matters, let’s take a moment to appreciate how the iPhone–the heart and soul of Apple’s business–just keeps motoring along. Sales were up by just a little, but given everything else, that’s a victory. Cook cited a quarterly record for iPhone buyers who were switching from Android and called out strong sales in developing markets such as Indonesia, Vietnam, and India.

Essentially, the iPhone behaved as if there was nothing bad going on in the world. Or, as Cook put it, “From an aggregate point of view, looking at it worldwide, looking at the data on iPhone for the June quarter, there’s not obvious evidence in there that there’s a macroeconomic headwind. I’m not saying that there’s not one, I’m saying that the data doesn’t show it.”

That Mac number could’ve been much worse

After a series of all-time record quarters for the Mac, Mac sales tumbled 10 percent versus the year-ago quarter. Apple says it was largely due to supply constraints and difficulty with foreign-exchange rates. (Foreign exchange was repeatedly mentioned in Apple’s remarks because the extremely strong dollar makes Apple products that much more expensive in other parts of the world.)

And yet, Tim Cook seemed relieved about the whole thing, given that Mac factories in the Shanghai corridor were basically shut down earlier on in the quarter. “We felt good, frankly, that we were able to, by the end of the quarter, get this back to where we were down 10 points.” Only down 10 percent? You should’ve seen the numbers a couple of months ago, friend!

Several analysts asked Cook and Maestri about how solid demand for the Mac was. On the one hand, many people believe that the pandemic brought forward a lot of computer sales that would’ve been made a little later in normal circumstances–and that’s setting Apple up for a fall. Also, PC sales are down. On the other hand, the move to Apple silicon has driven Mac demand–and those chips aren’t going anywhere.

Unfortunately, Apple says it just can’t tell what demand for the Mac is! “You can’t really test the demand unless you have the supply,” Cook said. And Apple just didn’t have the Mac supply.

The cocktail of headwinds

So what goes in Luca Maestri’s famous Cocktail of Headwinds? Well, you start with those rough foreign-exchange rates due to a strong dollar. They tend to either make Apple products more expensive elsewhere in the world or (if Apple doesn’t adjust prices), they cut into margins. Apple tries to fight this by having a currency-hedging program, but there are limits. Maestri said foreign exchange will weigh on next quarter’s results by perhaps as much as $5 billion.

Then you toss in a dash of “the situation in Russia,” as Cook and Maestri kept referring to it. (The situation is that the company has largely abandoned Russia as a market following its invasion of Ukraine.) It’s not as if Russia was a huge market for Apple, but it’s a market that’s gone from something last year to nothing this year, and that hurts.

Pour in some supply constraints, a combination of COVID factory shutdowns and that global silicon shortage, just for a dash of flavor.

And finally, there’s the classic bit of financial seasoning, the “tough compare,” when this year’s Apple product announcements just don’t match up with those in the year-ago quarter. Cook went so far as to cite AirTag coming out last year as a reason why the Wearables, Home, and Accessories category was down so much this year. (I’m skeptical. AirTag, really?)

But beyond that, if there’s any part of Apple’s product portfolio that got whacked by the current global economic bad vibes, it was Wearables, Home, and Accessories. “Looking at the numbers, there do appear to be headwinds in addition to the four items that we can articulate–and we believe those to be macroeconomic headwinds.”

So the iPhone kept selling, despite everything, but it’s quite possible that anyone thinking of buying AirPods or an Apple Watch decided that maybe they’d hold onto that money, for now.

Finally, one of my favorite things about listening in to Apple’s phone call with financial analysts is that there’s an actual Q&A session, in which Cook and Maestri have to give real answers–or, just as likely, dodge the questions entirely. There were some doozies this time.

The winner of this quarter’s Non-Answer Award goes to Richard Kramer of Arete Research, who asked Cook a pointed question about how Apple’s App Tracking Transparency policy was directly related to its success in growing its own App Store search advertising network. Cook’s response was to read his boilerplate about privacy being a fundamental human right, and then said that search ads were great for developers. Kramer’s question was a good one, and Cook’s dodge was not strong.

And the Nice Try Award goes to Ben Bolin of Cleveland Research, who tried to ask Cook about Apple’s rumored AR/VR headset product–by not asking him about it. Instead, he asked about “progress in AR/VR in [Apple’s] existing products.” I admire your skills, Ben Bolin.

Bolin probably got exactly as much out of Cook as anyone could have. After citing the 14,000 iPhone and iPad apps in the App Store based on the ARKit framework, Cook said: “We’re always exploring new and emerging technologies, but I wouldn’t wanna say anything beyond that.”

It’s a phone call, so I don’t know for sure, but I like to imagine that Cook winked as he was saying it.